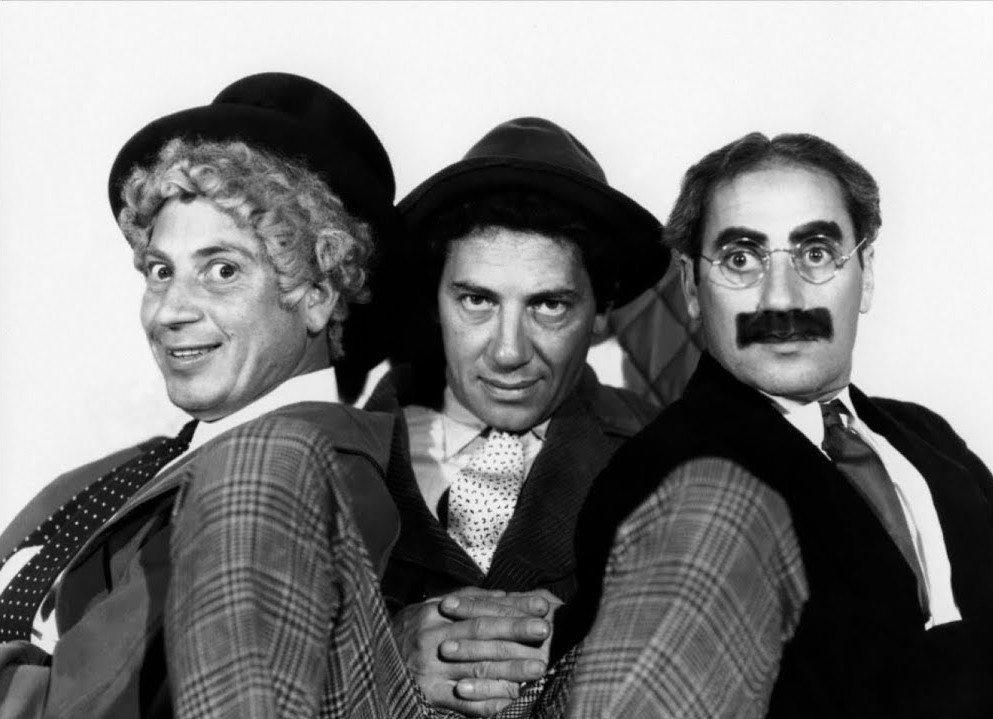 Legends of Comedy: The Marx Brothers

Back in the day, and we’re talking the stone age here (I mean, they shot in black-and-white…all the time, not just for “artistic effect,” which seems to be the only reason to shoot in b&w now… oh wow, I think I just heard a thousand millennials swoon), there was something called comedy teams. These were sets of comedians who worked together on numerous vehicles, where supporting actors were all assembled around the main act, which were the comedy teams. The comedy teams would do their schtick, and it would all be shoehorned into a very loose story.  Teams like Abbott and Costello, Laurel and Hardy, The Three Stooges all adhered to this formula.

And then you had the Marx Brothers. Real-life brothers Leonard Joseph, Arthur, and Julius Henry Marx were a cut above the rest, combining ingenious routines, quick wit and physical comedy into one dynamic package. Brothers Milton and Herbert Manfred were also around, though to a lesser degree – Chico, Harpo, and Groucho were the main attraction, and though they didn’t make a lot of movies, their zany antics captured the funny bone of audiences not just of their time, but for generations afterwards.

Unlike some of my other retrospectives, I’m not going to focus on the storyline or anything for the Marx Bros. (as I already said, they were just sort of an excuse for the trio to run their routines), but more going to focus on some of their bits. Starting with Horse Feathers, which features the infamous Password gag. Played out between Groucho and Chico, where Chico is admitting people only through passwords, it’s a clever and hilarious routine that features the trademarks of the two comedians – Groucho’s quick and sarcastic wit and Chico’s easygoing naivety and mixed-up wordplay. It’s a short routine but features the best of both performers.

Duck Soup features the mirror scene, a particularly hilarious bit that sees Harpo and Groucho pretending to be mirror images of each other, even though they’re obviously different men (and at one point, they ridiculously swap places). We also get more wordplay from Chico, who declares when pressed that he sold the country’s secret war code and plans, “Sure! I sold a code and two pairs o’ plans!” Their physical routines are exceptionally sharp, with Harpo and Chico harassing a lemonade vendor and Harpo strands Groucho repeatedly while attempting to chauffeur him on a motorcycle and sidecar.

My favourite routine of theirs is in the classic, A Night at the Opera. Showcasing the trio’s penchant for absurdity, Groucho is stuck in a tiny stateroom on a ship with stowaways Harpo and Chico (Harpo wearing one of Groucho’s shirts and snoring away in his oversized trunk, leading Groucho to observe, “That can’t be my shirt, my shirt doesn’t snore.” Chico and Harpo demand to be fed before leaving, leading to Groucho ordering an enormous amount of food for them, including a dozen hard-boiled eggs. Then, various other people start knocking on the door, and Groucho, ever the rascal, keeps inviting them in until the tiny room is crammed with people. This, of course, leads to the punchline where someone finally opens the door, and everyone falls out. What is particularly hilarious about this scene is Groucho, knowing full well he’s heading to disaster, gleefully inviting more and more people in, just for fun. The film also features the “contract scene,” which I quote to this day, especially ending with the side-splitting sanity clause punchline.

A Day at the Races brought one of their best routines, the Tootsie Frootsie bit. Pretending to be an ice cream vendor, Chico slyly begins selling to Groucho a never-ending series of books to help him determine what horse will win the race. At one point, you can clearly see that Groucho knows that Chico is just having him on, but he’s so interested in seeing how far his brother is willing to take the ruse that he plays along anyway.  Of course, it goes to absurd and outrageous lengths, but it wouldn’t be a Marx Bros. otherwise.

The Marx Brothers were definitely one of a kind, a comedy team powerhouse that seemed to combine all the hallmarks of great comedy: physical comedy, wordplay, wit, and a bottomless desire to make the situation as preposterous as possible. In the pantheon of comedic legends, they hold a special place in the annuals, and I hope that their ingenious gags continue to amuse and entertain future generations because their work deserves to be re-discovered, time and again.