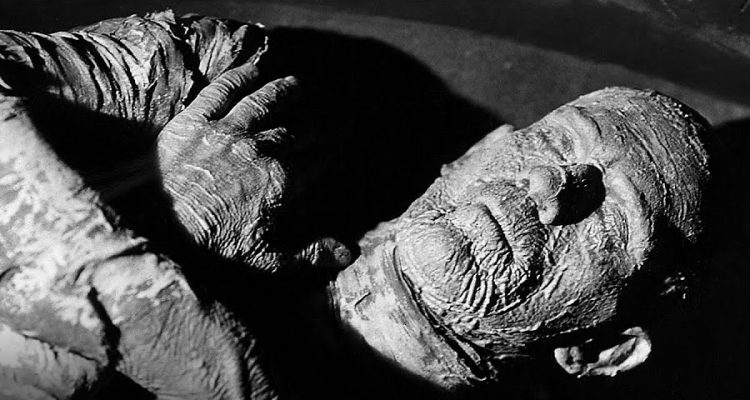 Legends of Horror: The Mummy

When I say the word Mummy, what do you think of? No, I’m not talking about the woman who gave birth to you – I’m talking about the Egyptian undead, an embalmed and wrapped corpse who has risen from its sarcophagus to plague the living. While sometimes the object of ridicule and humour (Mummies have been featured in films both by Abbott and Costello and Laurel & Hardy), there is no doubt that mummies, if done properly, are utterly terrifying. So next time you feel like laughing at a mummy, remember, late at night, while you’re lying in bed, about to depart the world for the land of Nod, that would be the perfect time for it put its cold, dead hands around your throat.

You can’t talk about mummies without starting off with The Mummy Universal Monsters franchise. While the first film featured Boris Karloff in the role of Imhotep (and Karloff was underrated as an actor because of his genre work, in my opinion), my mummy was always Kharis. I don’t know why, because if you’ve seen any mummy movie, a mummy is a mummy, it’s usually a bandaged dude, so you wouldn’t think it would matter, but for some reason, Kharis stuck in my mind. Maybe it was his connection with tana leaves which he needed to keep him alive, or maybe it was that he was featured in 4 of 5 Universal Mummy movies, but Kharis is my mummy. There’s just something frightening to me about a person brought back to life – especially one that has been buried in the sands of Egypt. There’s something mysterious and exotic about that sort of creature. Inevitably in these movies, you would have Kharis brought back to life, either intentionally or not, and he may or may not be under someone’s control for a while, but eventually, you know all hell’s going to break loose and when it does, watch out! Unlike most opponents, there’s no easy way to dispose of a mummy. Shoot it? Perhaps, but not likely. Stab it? Nope. Burn it? Yeah, that might work. More than likely though, you have a vengeful Egyptian corpse on your ass, and those kinds of creatures don’t need to sleep, eat, or rest. So, the only thing that Mummy is thinking about killing you – want to keep laughing at them?

One mummy I especially remember from my childhood was the mummy in Monster Squad. It wasn’t particularly imposing like Kharis (who was played usually by Lon Chaney Jr. who was physically arresting) but he was kind of gross – unlike most mummies who were perfectly wrapped (my compliments to the undertaker), this mummy’s wrappings were all in tatters, so you could see the corpse beneath the bandages. Lovely. Also, this one walked very, very slowly, so like the zombies in a Romero film, you would think you could run away from him. Which you probably could. But eventually he would catch up to you. Remember, they don’t need to stop and grab a burrito from the Seven-Eleven. So, it’s entire focus is you. Anyhow, I don’t remember this mummy killing anyone or being super-impressive, but the face the mummy was even included in the film speaks to the legacy of The Mummy films at Universal.

Of course, if we’re going to talk about mummies, you have to mention The Mummy trilogy from the late nineties/early aughts. I missed the wrappings on this mummy but damn if Arnold Vosloo isn’t one of the most impressive human beings on the planet. What he lacked in classic trappings from the previous mummy roles, he made up for by bringing the ten plagues of Egypt, desiccating the bodies of those foolish enough to read from the Book of the Dead and even creating a wall of sand with his face imprinted on it (!!!!!) to chase the terrified heroes. The first Mummy film gets a lot of press for being an adventure film and it is, but there were still some impressive scary bits. I don’t know about you, but I wouldn’t particularly want a rotting corpse sitting across from me who is going to steal my flesh and organs to replace its own. No thanks. The other two Mummy movies…I won’t talk about because they’re not worth talking about, but that first film really did a good job of bringing the mummy back to the screens of horror lovers.

So, that’s it for my look back at the Mummy. While maybe not as popular as Dracula, Frankenstein or the Wolfman, the Mummy is one of the many faces in the Universal Monsters Hall of Fame. If done right, even modern films could probably turn the Mummy from a source of ridicule into something truly frightening (though the 2017 Mummy film sucked large so we probably won’t see another one for quite a while). If this doesn’t come to pass, we still have some great mummy movies from the past to enjoy, and it’s that timelessness (much like the sands of Egypt) that earns the Mummy the title of horror legend.