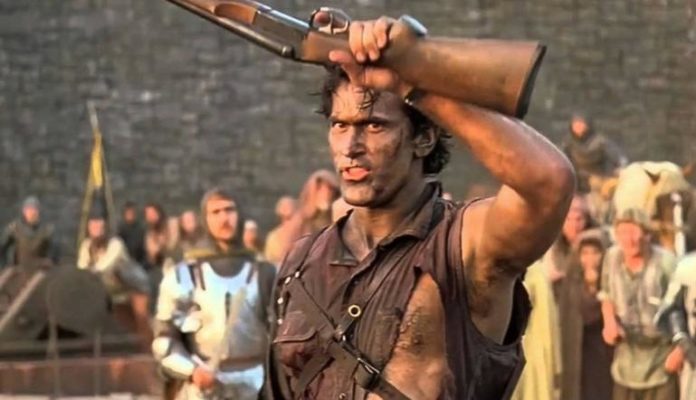 Evil Dead vs. Evil Dead II vs. Army of Darkness

Necronomicon Ex Mortis…the Book of the Dead. Three young fellas from Michigan brought the story of the Evil Dead to the screen in the early eighties, and the genre of horror was never the same. What started out as a small-budget horror feature turned into a franchise and a television show with a cult following and made Bruce Campbell a star. Now it’s time to go to that cabin of the woods, sit down for a spell, ignore the screaming and pounding at the door and see which one was the best!

The Story: There isn’t really much to speak about in regards to the story. A bunch of young adults go to a cabin in the woods, one would think to party and find a book. Reading from the book, they awaken an ancient evil that spends the rest of the movie terrorizing, killing, possessing and killing again the occupants of the cabin. While it seems rather simplistic, there weren’t a lot of movies out there that followed this formula, you usually had the big bad (be in Michael Myers or the killer from Black Christmas) killing the characters one on one while they were separated. In this film, the characters are more or less together through the movie (with some exceptions), but the characters can pretty much see the threat coming at them head-on, the Evil Dead doesn’t hide much unless it’s possessing a person and even then, it’s usually out and in your face.  While this may be ho-hum now, it wasn’t when this movie first came out.

The Characters: While Bruce Campbell’s career was launched with this film, Ash isn’t the same over-the-top that we would come to know in future entries in this series. He seems like a nice, quiet guy who is in love with his girlfriend (he apparently is preparing to propose to her) and is the everyman character who the audience quickly identifies with the most. Therefore, when he is being attacked constantly when the action gets going, it’s as much the audience getting attacked as his character, through that identification. The other characters are nothing to write home about, mostly fodder to attack Ash throughout the film, but I think that was the whole point of the exercise.

The Horror: Of all the Evil Dead incarnations, this was the most like a true horror film. There is very little humour, as the film tries to be legitimately scary. In most ways, it succeeds, as the set pieces are truly impressive, like the tree attacking Cheryl and the various attacks that Ash suffers from the other cast members. In a way, this film borrows a lot from Night of the Living Dead, playing off the horror of previously-regarded loved ones turning into enemies. There’s something to be said about the innate tension when you don’t know if a friendly face could be hiding a nemesis bent on taking your life. This is the main horror ideal of the movie, and for the most part, it succeeds. 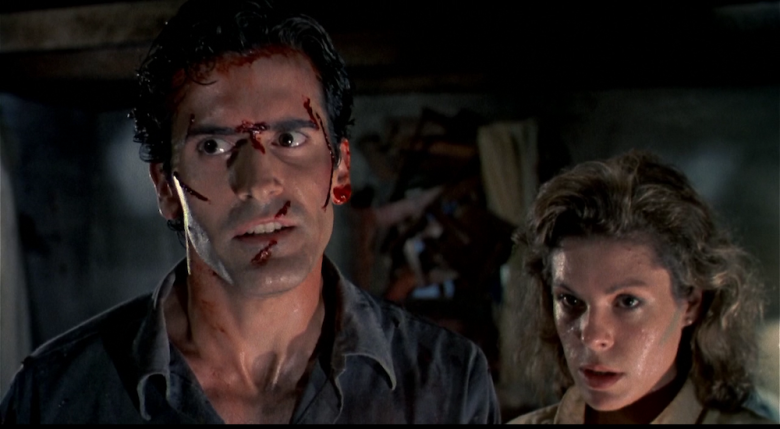 The Story: A remake/extended version of the first film, this movie covers a lot of the first film in its first act, only to expand on it in 2nd and 3rd acts. The interesting aspect of this film is how much of the movie we’re alone with the Ash character. It takes some seriously entertaining bits to leave an audience that long with only the main character, but Raimi and company wisely ramped up the comedy for this one. Otherwise, it would have burnt out quickly, as there’s only so many times you can watch Bruce Campbell get chased around with the camera before you lost interest. Luckily, they decided to take the story in a different direction, which allowed it feel fresh, even though it’s basically a rehash of the first film, albeit with different characters.

The Characters: Ash returns in the 2nd film, and unlike the first, he is far more charismatic in the sequel. Who can forget his hilarious battle with his own possessed hand, which leads to all sorts of acrobatic stunts and gore-soaked mayhem. This is truly the Ash character at its finest and is a precursor to his heroic turn in the third film. Other than Ash, the only other two noteworthy characters are Dan Hicks as Jake, who plays the white-trash hick (pun intended) to perfection, and Ted Raimi as the possessed wife of Professor Knowlby. Raimi, in particular, plays the role with gusto, chewing the scenery in an over-the-top performance that perfectly suits the tone of the film.

The Horror: While Evil Dead II is far more comedic than it’s predecessor, there is still that middle part of the film where it’s Ash versus the entire cabin. While the results are often hilarious, the sequence where the camera (playing the part of an evil spirit) is smashing through the cabin and Ash’s Oldsmobile, chasing our hero down, is surprisingly tense, as you’re not sure if the evil spirit will catch Ash or not. When Ash is alone, you’re not quite sure what’s going to happen, and the lunacy that erupts is both funny and horrifying, as the writers allowed their imaginations to run wild, leading to Ash taking a gallon of blood to the face, and at one point, the entire cabin laughing hysterically, with a clearly unhinged Ash joining in. 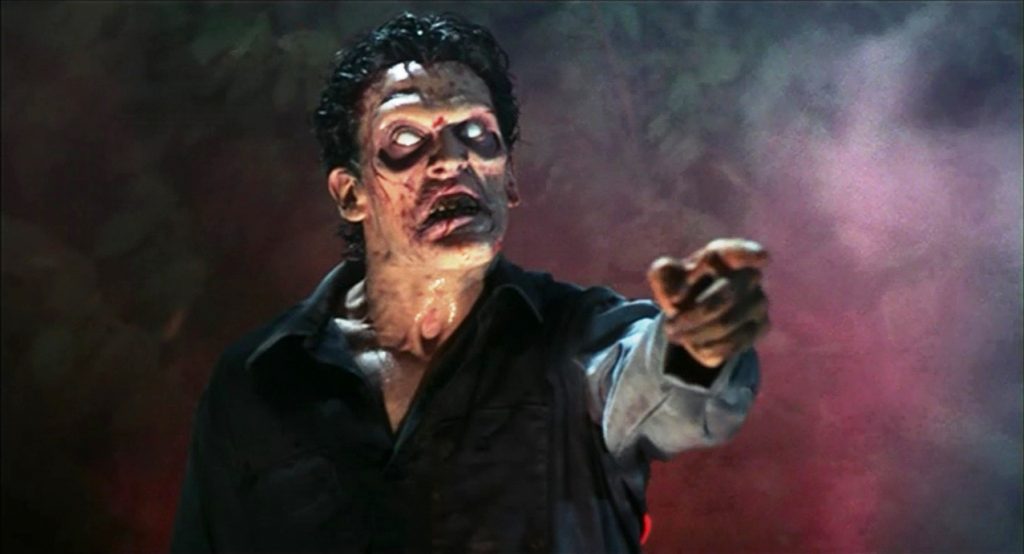 The Story: Branching out from the other two films, the story in this one is more adventure than horror, leading Ash to become the unwitting (and generally unwilling) saviour of a village that ends up being antagonized by the evil dead. While following a somewhat formulaic chain of events (hero starts out under-valued, rises to become a leader, falls in love with a girl, fights bad guy), the film is off-kilter enough to make up for its generic underpinnings. Blending the genres of adventure, horror, and comedy together in a brilliant mash-up that is both incredibly bizarre and extremely satisfying, Army of Darkness dares to break out in ways that the previous two films were unable to.

The Characters: In this film, we see the final evolution of the Ash Williams character from cowardly and bumbling idiot to action hero. While some may view his antics from the first two films as making him unsuitable to be the hero of the third, I would argue that what people forget is, despite the comedy and idiocy he displays, especially in the second film, this is a guy who not only fought but more-or-less conquered the evil dead in the first two films. To me, this version of Ash Williams is the best version of that character; while he comes across sometimes as rude, selfish and incompetent, he still leads the villagers and makes warriors of them, successfully planning a defence against the Deadite Army. The supporting characters are all competent and despite Campbell being the clear star of the movie, carve out their own individual niches in the film.

The Horror: Possibly being even further removed from the horror genre than the 2nd film (if possible), Army of Darkness is more medieval adventure/comedy than horror. That being said,  the sequences in the windmill, despite being absurd in places, perfectly displays the evolution of the horror from the first film. While Evil Dead was a gorefest, Army of Darkness deals more with Ash’s insecurities about leading the villagers effectively, as well as throwing in the bizarre element of his own clone springing from a mirror to lead the Deadite army against Ash. Evil Ash represents the greedy, unpleasant side of Ash’s personality, taking Sheila and transforming her into a Deadite, and proving to be a born general and imposing adversary. In Army of Darkness, the horror is not so much external as it is dealing with Ash’s own insecurities in becoming a leader and overcoming a powerful foe.

The Evil Dead series is worthy of its cult status; blending a mix of genres together, what started out as a small, low-budget splatter flick evolved into a big-budget adventure story. While it’s easy to point to the original as the best, I actually believe that the third film was the best. It’s the best blend of what Sam Raimi and Bruce Campbell bring to a picture – action, comedy, a hint of horror. It’s probably the most mature of the three films, providing the best version of the protagonist and displaying the ideas that were probably only dreamt about in the first film. Whatever your ranking or opinion of the three movies though, you have to admit that after watching them, there’s really only one word that sums up the experience – groovy.