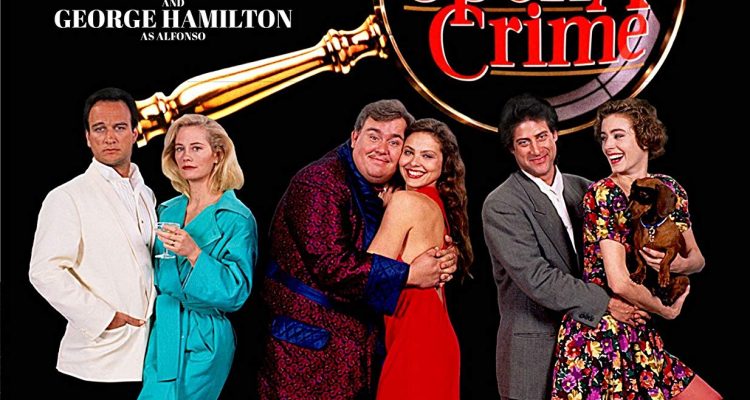 Once Upon a Crime (1992) Kino Lorber Blu-ray Review

From director Eugene Levy (who has a cameo), Once Upon a Crime is a sweet natured little lark of a movie, but the whole thing feels forced and unfunny.

Plot: Phoebe and fellow American Julian Peters meet in Rome, find a lost dog, and agree to return it to Monte Carlo to split the five thousand dollar reward. Discovering the dog’s owner dead, they panic and become fugitives. Other victims of misfortune also become suspects, as the plot twists and luck and judgment desert everyone.

Review: A conflagration of inopportune events occur around the same time in Rome: A lost dachshund dog sparks the beginning of some very bad luck for some tourists. A desperate woman (Sean Young) finds the pup and realizes that it belongs to a wealthy woman in Italy, but in order to claim the major reward cash, she has to take the dog by train quite a ways to get there. She teams up with an equally desperate out of work actor (Richard Lewis), who swindles her by selling the animal to a skeezy gambler (John Candy) on the train, who is on his way to Monte Carlo. Also on the train is an American couple (Jim Belushi and Cybill Shepherd) in the midst of a marriage crisis, and they are on their way to Monte Carlo as well. Once the train arrives, the characters all intersect and intermingle with each other, but the darn dog ends up in the wrong hands over and over, and the woman who actually owns it turns up dead … and dismembered and in a suitcase on the train! Whodunnit is anybody’s guess, but I guarantee you that the motive is as hackneyed as the plot for this innocuous comedy.

From director Eugene Levy (who has a cameo), Once Upon a Crime is a sweet natured little lark of a movie, but the whole thing feels forced and unfunny. There are a few funny moments, but it’s not worth sitting through the whole thing to get those choice tidbits. Even John Candy’s performance is a labor. I miss the days, however, when movies like this were produced and released theatrically.

Kino Lorber’s new Blu-ray of Once Upon a Crime is presented in an unremarkable looking high definition transfer. It’s definitely an upgrade from the MGM DVD, but it’s still not a defining moment for Kino, or for this film, should it have any fans.