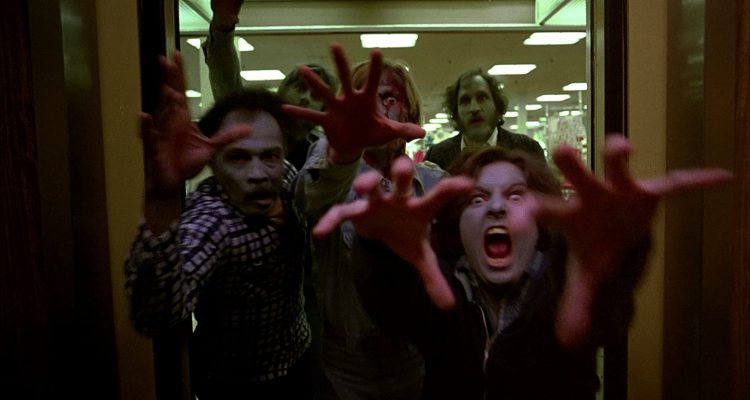 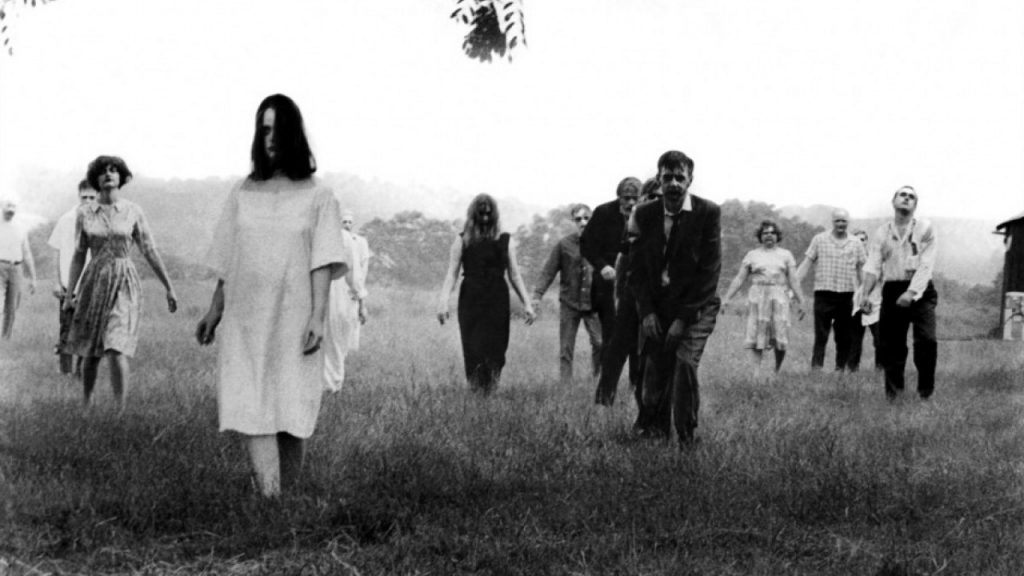 Story: On the surface, the story of this movie is nothing to write home about. A woman is chased by zombies into a farmhouse. She is soon joined by others, who argue amongst themselves, while an army of the dead congregates outside.  However, the genius of this story is just that. This could have been a simple survivalist movie – think Rio Bravo with a much lower production budget. However, the zombies don’t even matter in this movie. It’s all about the humans and their inability to get along, to come to an agreement on a plan to deal with their zombie adversaries. Ultimately, this inability leads to their downfall – and the crazy thing, both sides are right. Mr. Cooper is correct that the basement is an effective place to hide, as Ben discovers later. Ben is right that they have to try something to escape – the fact that they wait so long, arguing about whether to act or not causes more zombies to show up, and when action is taken, a series of unfortunate events leads to their downfall – but the zombie force that impedes the heroes would have been lessened if they simply acted quicker.  The other central theme is the characters’ failures to question/investigate.  If Barbra and Johnny had realized the odd way that the man in the graveyard was walking, if Ben and Barbra had investigated the house, if Cooper/Tom had gone to discover what was causing the noises upstairs, if the characters had realized that a zombie bite could turn a human into a zombie, and most importantly, if the posse had bothered to realize Ben wasn’t a zombie at the end, a lot of grief and tragedy would have been averted.

Characters: In the face of all the insanity and horror, you could not ask for a better character to root for than Duane Jones’s Ben.  He is resourceful, level-headed and focused. With the zombies gathering outside, he is practical, swinging into action to board up the windows and doors. However, it can be argued that Jones is well-equipped for this sort of situation – being an African-American, he would, unfortunately, have to deal with adversity regularly. Barbra, on the other hand, being white (and I would assume, somewhat privileged) crumbles in the face of this same adversity. She is almost catatonic and a non-entity for the latter half of the film.  Likewise, Cooper and Tom, in their own ways, are equally ill-equipped – Cooper handicaps the group with his fear and cowardice, while Tom’s youth and inexperience lead to sabotages the group’s only attempt at an escape. Ben’s reward for being the best of the group is to survive the night – but in this tragedy, nothing more.  These are all well-crafted, intelligently-portrayed characters.

Horror: There wasn’t much of a budget for this movie, and in today’s world, where splatterhouse gore movies are relatively common, this movie is extremely tame. The zombies, while an ever-present threat, hang around outside for most of the picture. There is some horrific imagery of the zombies chowing down on the barbequed remains of Tom and Judy, but that’s about it.  The zombies are not the true horror of this movie, though – it’s the inability of the remaining human characters to act and decisively escape their quarry.  It’s almost like watching someone who has been in a terrible car accident argue with their doctor about the best course of treatment while their blood pours out of their body. The zombie attack is simply the vehicle to enable this point is made. 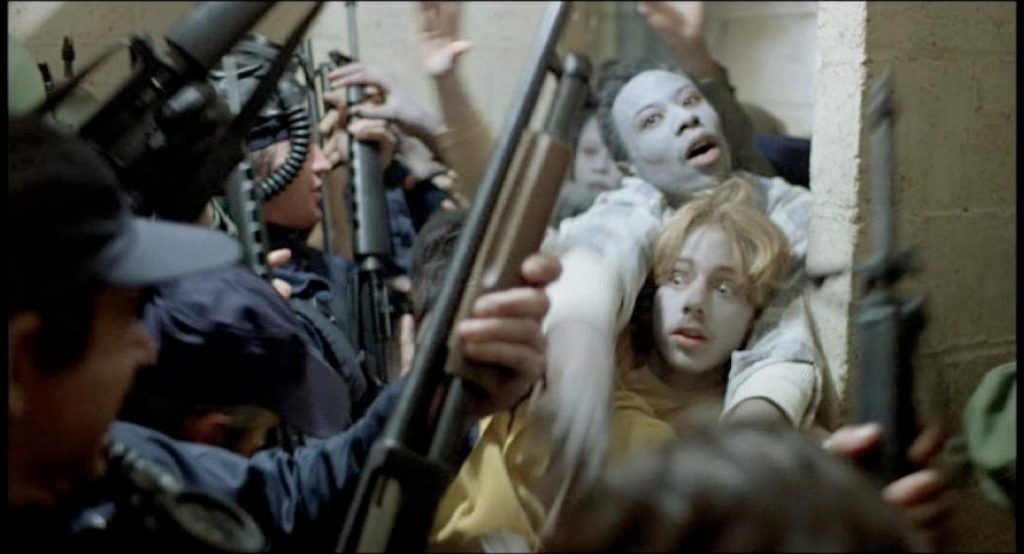 Story: While the setting, characters and circumstances of this sequel are, for the most part, removed from this film, this story is every bit as rich as the original. Instead of the civil rights movement and man’s inability to get along being examined, consumerism is the focus of this story. The zombies inhabit the mall, returning to a place important to their lives after their death. It’s startling to think that of all the places that they could go after their reanimation, they choose to go to the mall – it certainly speaks a lot of the filmmaker’s opinion of the masses.  Likewise, when they get into the mall, the main characters, after securing it, take great glee in partaking in temptations offered by the place, stealing money from the bank, taking whatever goods they want, playing video games, etc.  Even in the face of a zombie apocalypse, the creature comforts that such a place offers is too attractive for the main characters to exist.  When the biker gang invades the mall and begins to wantonly destroy everything, again, it is such a pointless endeavour. The world has ended, and yet, the characters must revert to old habits, even though it achieves no purpose. Even more than the first film, I feel like this film is an excellent constructive commentary and criticism of western culture.

Characters: Again, you have a great main character who embodies the qualities of Ben from the first film, this time in the form of Ken Foree’s Peter. Peter is a true leader in this movie, stopping the crazed SWAT member from killing innocents in the building in the first fifteen minutes of the film, keeping order in the small group of four, and being the level-headed voice of reason throughout the picture. Fran, the lone female of the quartet, also possesses an inner strength, dealing with a pregnancy on top of the stress of needing to fight off zombies daily. While not as skilled as Peter, her practicality and recognition of the gaps she needs to fill leads to the critical decision to have her learn to fly the helicopter, something that saves her and Peter in the end.  Meanwhile, Steven and Roger, the other two characters, exhibit major character flaws that prove to be their undoing. For Roger, it’s his recklessness, born out of fear, that causes his ultimate demise. For Steven, it’s his selfishness, which almost kills Peter before they arrive at the mall, as well as his decision to fire on the biker’s, declaring that the stuff they are destroying is his, though he has no legal claim on it. Again, like the first film, these are excellently designed, conceived characters who are very believable.

Horror: While still not a huge-budget film, the special effects have improved in this film from the first, and feature Tom Savini’s excellent makeup effects. While some may dismiss them as cheesy, I would argue the grey-hued makeup makes the zombies appear both uniform and unearthly. When the characters get killed and reanimate, it is startling to see the transformation between the living actor and the dead one.  There is also more danger in this one – the zombies are more active, and the biker attack presents a threat that the original movie did not possess – namely having to deal with live rivals as well as the dead.  It’s every bit as gory as the original (if not more), and while you eventually become desensitized after seeing it so much, it again hits home the point that when the zombies do get hold of you, they don’t just kill you, they rip you apart – a fate no viewer would want to experience. 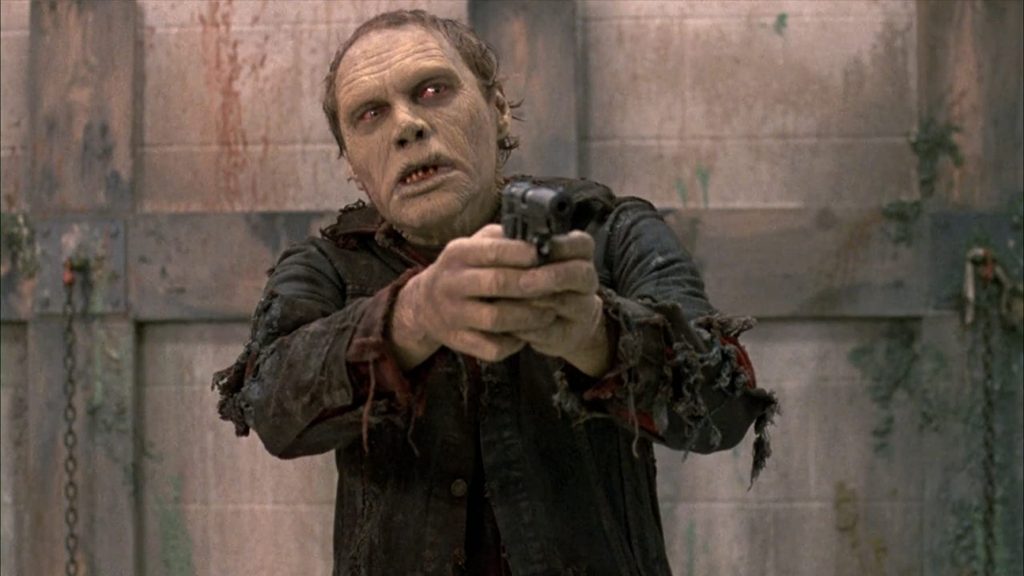 Story: This movie is basically a story of what happens when idealists clash with realists.  The idealists, embodied by the scientists, look forward to the future in which zombies can be trained or harnessed to live peacefully with humans. The realists, represented by the military, are disinterested with tomorrow, and only care about their current situation. There is no game plan for the soldiers (which shows there is no real military leadership amongst those men as I believe a huge part of military thought is strategy), they just are reactive to their own individual problems, instead of the world as a whole. The scientists want to do good for mankind as a whole; the soldiers, especially Rhodes and Miguel, are selfish, and only care about themselves. Much like the other two movies, this is a layered, nuanced movie that is a lot more than its surface appears to be.

Characters: Unlike the first two films, there aren’t a lot of characters to cheer for in this one. I suppose the heroine of the story is Sarah, but I find her cold, uncaring and shrill, especially at the beginning of the picture. The military men are almost wholly irredeemable, and even when their motives are understandable, you still don’t really like them. I really hate Miguel the most; he’s either whining like a child or screwing up.  His completely selfish move at the end of the movie makes him the film’s villain, in my opinion. Dr. Logan is too mad to take a liking to, and Dr. Fisher, too weak and whiny. I suppose the two helicopter men, John & McDermott are the most sympathetic characters, but I found John to be so cynical and selfish, there are periods where I don’t really even like him, though he is the closest one to a hero in the entire film.  I guess that makes McDermott the most likable character of the bunch, strictly by default. Actually, my favourite character is the zombie Bub, as his behaviour is completely understandable, and he has the most human response of any of the characters, reacting in grief when seeing the dead body of Dr. Logan.

Horror: This installment in the franchise exhibits the best visual effects to date. While the somewhat unrealistic grey makeup returns for this flick, the maiming of the soldiers is far more visually impressive, leaving a verisimilitude to the attacks that inspire fear of the outcome of an encounter with a zombie. However, the threat of the zombies is relatively minimal in this film, due to their containment by the soldiers – the real horror is the omnipresent threat of the military.  Rhodes is the perfect example of this fear – there’s a great deal of unpredictability regarding his temperament – every time he talks to Sarah and the other scientists, or to John and McDermott, you’re just waiting for him to blow his top. Considering he is in charge of the military and has possession of the weapons cache, he poses the greatest threat to the “good guys.” His callous murder of Dr. Fisher is reflective of this threat and indicative that this movie’s point is that while the zombies are dangerous to humans, they are just as much, if not more hazardous to each other.

There’s not a lot of give between these three movies. All are well-thought-out movies that are products of the time they were made in, have valid social commentary, and lead to a logical evolution of how a zombie apocalypse would unfold. I feel though that the second film, Dawn of the Death, is probably the best representation of the quality of narrative that Romero presented in the film, balanced with the thrills and chills that are expected of a horror movie. In this case, though, picking any of the three movies as the best of the lot could be successfully argued, though I would say Dawn is a little more effective than Night just based on its scope while featuring far more likable characters than Day.