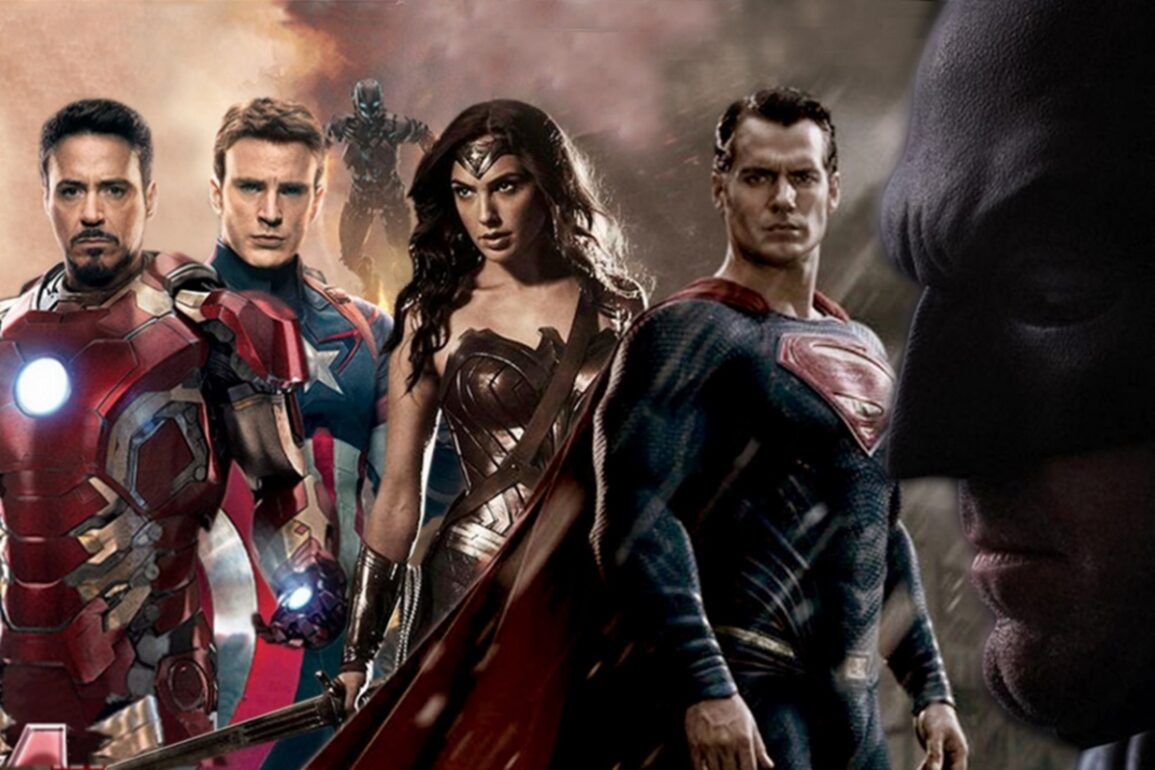 The MCU vs. the DCU

In terms of the comic book shared universe, it is generally acknowledged that the Marvel Cinematic Universe is kicking the DC Universe in the butt. While all Marvel movies are considered to be of the highest quality (just check Rotten Tomatoes if you don’t believe me), the critics (and it seems fans) loved to kick dirt in the eye of the DC shared universe movies…all three of them. However, I am not here to join those people and tell you how wonderful the Marvel movies are in comparison with the DC movies. Oh no…where would be the fun in that? Instead, let me explain my viewpoint, which is simply this: yes, there are great Marvel movies, but to call every single one of them awesome is a bit of a reach, while the DC movies have taken a different approach and in some ways, are even better than the Marvel movies.

Let’s start with the character who is considered the head honcho of the MCU: Iron Man. After all, his origin story is what launched the entire franchise and when we’re talking about which actor took home the most money for any of the Avenger movies (or any of the MCU movies, period), it’s Robert Downey Jr. While there is no denying that the first Iron Man film was good (not great mind you, but good), number two and three were among the worst Marvel movies ever. Iron Man 2 was all over the place and featured a rather weak villainous duo for Iron Man and War Machine to take out and part 3 was a grave disservice to the Mandarin character (and no, I don’t care that they tried to repair that whole thing with the Marvel One-Shot) and the storyline was even worse than part 2. However, the most glaring problem with Iron Man is…Iron Man. He’s a jerk. A pompous, arrogant ass who annoys me. Big time. Not only that, what has he done? Did he beat Iron Monger in part 1? Nope…that was technically Pepper Potts, she hit the button that screwed up his suit. Did he beat Whiplash in part 2? Sure…with War Machine’s help. Did he beat Killian in part 3? Uh-uh…once again, it was Pepper Potts…maybe she should get her own series instead of Iron Man? The fact is, Iron Man has done virtually nothing in the MCU, save flying the nuke into outer space in the Avengers…and even then, he had the Avengers around him…so…yeah…

Now let’s get to the God of Thunder. While lots of praise and attention has been heaped on Iron Man, Captain America and the Hulk, it seems like Thor is the forgotten stepchild of the Marvel series. When people talk to me about the MCU, they mention the Guardians of the Galaxy (which makes sense because the first film was probably the best of the MCU movies), the Avengers and Iron Man…pretty much in that order. No one comes up and says “man, how about those great Thor movies!” That’s because…they aren’t that great. The most damning fact about the Thor movies is everyone talks about how great Tom Hiddleston as Loki is in the series…ummm…what about, you know, Thor himself? The title character? “Oh yeah, he’s good…love those little videos where he’s funny with that other guy…okay, but Loki is AMAZING!” You know you’ve missed the mark when you’re grossly out shadowed by the bad guy. The fact is, Thor in the movies is just not that interesting. Every time he tries to do something, a cheesy comedy bit with Kat Dennings is thrown in, or a horrible romantic scene with Natalie Portman who clearly has no emotional investment in any of the scenes…probably because they aren’t really written that well. The Thor movies are just kind of…meh. You don’t really get behind Thor as you would a Captain America or the Guardians of the Galaxy. Maybe it’s because he’s a god and no one can identify with him, maybe it’s because he’s been stuck with less to do than the other main characters, or maybe it’s just because his supporting characters (save for Loki) haven’t really made an impression on people, whatever the reason, Thor is a glaring weakness in the MCU.

Now let’s turn our attention to everyone’s favourite jolly green giant…the Hulk. Another little matter that everyone seems to ignore when praising the MCU is that one of its main characters, the Incredible Hulk has only been in one movie of his own. Iron Man has had 3, Captain America – 3, the Guardian’s the Galaxy – 2, the Avengers, Ant-Man, hell even Spider-Man has had a second movie announced and the first one isn’t out yet? Why then is no one clamouring for another Hulk movie? Maybe because his one movie in the MCU sucked? Like, really badly? Abomination looked terrible, Hulk only appeared in 3 scenes and the movie was more of a hearkening back to the Bill Bixby/Lou Ferrigno series than a true attempt to fit the Hulk into the MCU. It was just a mess…and one that no one talks about. Considering the other movies that are fawned over in this series, that’s pretty telling.

Other than the Avengers or Guardians of the Galaxy, everyone’s favourite Marvel movie is probably Captain America: Civil War. Everyone gushes over the big fight at the airport and why not: it is a pretty spectacular scene. However, Civil War as a whole, is actually a vastly overrated movie. Firstly, everyone just now noticed that when the Avengers fight people, there’s a chance innocent people get killed? How many movies in and everyone just woke up? Also, the guy who’s trying to make them sign the big Sokovia Accord is the same guy who created the Abomination? Kettle, meet pot! Are you kidding me? Then there’s that whole thing at the end where it shows the Winter Soldier murdered Tony Stark’s parents. All of a sudden, he gets teary-eyed and yells that the Winter Soldier killed his mommy. Umm…and your dad? Look, I know he didn’t get along with his old man, but I’m sure he didn’t want him killed! Also, this is the first time I’ve heard about the mom…I know far more about his relationship with his father than ever his mom. Also, why is Tony Stark even in favour of the accord? Because he was guilt tripped by some random woman? Who wrote this? Sorry guys, this movie was just a really big miss for me and despite the accolades, I just don’t see it.

Let’s move on to Man of Steel. This movie was not really talked up about really being a great film, everyone likes to point out how Superman wasn’t saving people, he murdered Zod, etc, etc. Okay, firstly, this is like, Superman Begins…he’s not Superman in this movie. He’s learning to be Superman. Zod and his men are terraforming the planet and are killing people already. How in the blue hell is Superman supposed to stop them without innocent people getting hurt? Is he supposed to fly off into space and lure them there? What if they don’t take the bait and just say “huh, Kal-El just flew into space…you think he was trying to trap us away from people? Ah well, let’s continue the terraforming…” Zod was in an urban centre, it wasn’t like Superman could say “umm, excuse me, General Zod? Yeah, could you maybe not terraform directly in Metropolis? Maybe head somewhere where no one is?” The whole thing with Superman killing Zod makes me laugh – because Superman also killed Zod in Superman II! Let’s recap – Zod lost his powers in that movie, Superman crushes his hand, lifts him up and throws him against a wall where he falls into a presumably bottomless abyss. Yup, he’ll walk that one off! What Man of Steel did give you, was a fairly spectacular and entertaining look into the becoming of Superman and all of the fears and doubts he carries serving as eventual protector of a planet he does not come from. Next to some of the Marvel movies, I would take this one every single day of the week.

Okay, let’s tackle this one. B vs. S is a really maligned movie, people love to poke holes at it, the whole “save Martha” thing and all that, really makes people’s bloods boil and I’ve heard many, many rants against this movie. Which I just don’t get. I found the movie to be incredibly entertaining and it was terrific to see Batman, Superman and Wonder Woman sharing the screen in a live-action movie. Not only that, we get hints of the forming of the Justice League! Who wouldn’t get excited about that? Apparently, the people who saw this movie didn’t, because all they did was complain about Ben Affleck’s casting, the storyline, the look of Doomsday, Jesse Eisenberg’s performance as Lex Luthor, etc, etc. I’m not saying that valid points weren’t made, but everyone is angry at this movie, yet gives Marvel a pass every single time. All I can say is, Batman was great, loved Affleck as the Dark Knight, thought it was genius to make him like Frank Miller’s Dark Knight, the storyline was good, there were some problems but overall, nothing to lose my temper over, Doomsday was fine and Lex Luthor, well this was a different take on the character, more like a Mark Zuckerberg-esque character than traditionally seen in the past. Was it the Luthor I preferred? No. But it was also not worth projectile vomiting in rage over.

Which leads me to the third DC movie. Once again, this movie got a lot of hate, mostly over tone. People wanted a dark, gritty movie (which is funny because they complained about that feel with the other two DC movies) and when they got a fun, popcorn movie that was light on the logic but delivered in the action. Did the plot make a lick of sense? Nope. But you know what? It was entertaining, the actors for the most part looked like they were having fun with the roles and at the end of the day, I smiled more than grimaced or winced throughout the film. The characters has great camaraderie (at least the characters they bothered to develop), the look of everyone was pretty darned good and at the end of the movie, I felt like I got my money’s worth. Were there problems? Hell, yeah…but it’s the sort of movie I feel will get better with age, now that I know what it is, which is just a fun, screwball movie. At least it was fun and didn’t take itself too seriously, which is more than I can say for some of the Marvel movies.

To wrap this up, I think that we live in a pretty special era of films. People may criticize the plethora of comic book movies and the so-called serious artists may roll their eyes when the latest slate of Marvel and DC movies are announced, but as a kid who read comic books growing up and still reads comic books today, I think it’s pretty damn awesome that the characters who I read and got to know through my formulative years are now leaping off the page onto the silver screen for a new generation of fans to enjoy. I just wish that we could all sit down and enjoy these movies for what they are instead of trying to outclass one side over another, because the perceived gulf of quality between the two isn’t as wide as most would have you believe. Dig a little deeper and look at things for what they are and you may find that the DCU isn’t this horrible pit of despair that isn’t worth your time to watch and enjoy.