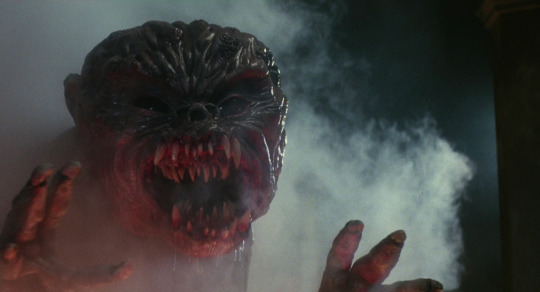 Cool story and atmosphere. This is one of the gems to come from Vestron Video. The Blu-ray looks great.

Plot: A priest battles a demon that kills sinners in the act of sinning.

Review: Over a two-year span in New Orleans, two priests are viscously murdered at their altar in the same church, and the Vatican closes the church until it can find a suitable replacement. Enter young Father Michael (Ben Cross, well cast), who may not be a perfect priest, but he experiences an unusual miracle when he falls off a tall building and emerges unscathed from the occurrence. The Vatican reopens the church in question and stations him there, hoping that his miraculous experience has given him the grace to overcome whatever evil may lie in waiting in the church. And the Vatican knows that the evil residing in the church feeds on the souls of the righteous at the moment they sin, hence the demon visits under the guise of a gorgeous naked woman. As Father Michael investigates the previous two deaths of the priests at his church, he meets some unsavory characters who hang out at a local Satanic nightclub called The Threshold where a young woman (a virgin) has been spending most of her nights, and when Father Michael tries to help her escape that way of life, both of their lives are turned upside down when Father Michael begins to feel tempted to make love to her. Father Michael will have to be especially on guard when the red headed demon comes to visit him, and all hell (literally) will break loose when he fights back with his faith and will.

One of the underrated gems to come from the Vestron VHS days of the 1980’s, The Unholy has always held a cozy spot on my video shelf. When Lionsgate released a multi pack DVD collection that ended up in Wal Mart dump bins, I snapped it up because The Unholy was included in it, and much to my surprise, it contained a widescreen transfer. Now, with the advent of blu ray, Lionsgate has resurrected quite a few Vestron titles for their “Collector’s Series” line, and The Unholy (numbered at #10 on the spine) has never looked or sounded better, with digital restored image and sound. There’s a treasure trove of features on the disc, including a rambling audio commentary by the director, Camilo Vila, and a moderator, the isolated score, an alternate ending, and quite a few featurettes, including an on-camera interview with Ben Cross. So far, this is one of my favorite releases from the Vestron blu ray series.