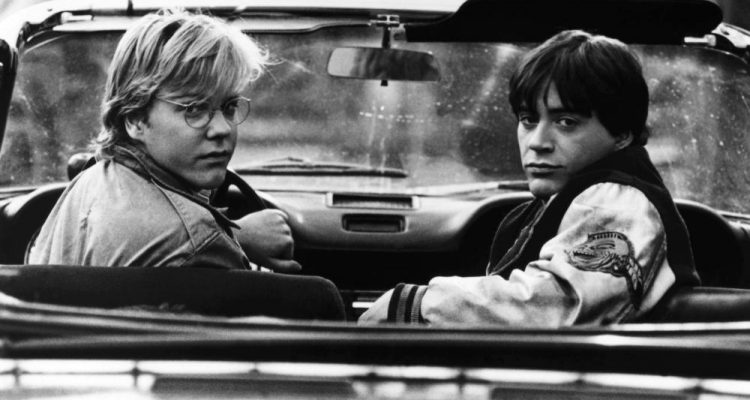 1969 has never been a classic, but it’s a fine document of the talents of the two lead stars at this time of their careers.

Plot: Two friends living in a small town during the 1960’s run away to enjoy their freedom during the Vietnam War, thus disappointing the father of one of them. When they return to town, they realize how important family unity is.

Review: Best friends and next-door neighbors Ralph (Robert Downey Jr.) and Scott (Keifer Sutherland) graduate high school and go to college, primarily to avoid the Vietnam War draft. Scott’s older brother joins up, goes to war, and leaves his family reeling from the initial realization that their family will never quite be the same. Scott’s father (played by Bruce Dern) is a staunch, old-fashioned man – a veteran of the Korean War – and his mother (played by Mariette Hartley) is in shock when she faces an empty nest. Ralph doesn’t take school seriously and becomes a drug addict and is expelled from college, while Scott gets caught up in the burgeoning hippie culture. To protect Ralph from being drafted, Scott instigates a summer-long road trip through America, and for awhile it’s grand, but eventually they end up back home, where Scott finds out that his brother is MIA, and then they soon learn that his brother was killed, which propels Scott’s anger to start a movement in his small town that opposes the Vietnam War. Ralph, meanwhile, descends into bad behavior and drug-addled shenanigans that get him locked up in jail, but Scott leads the whole town to demand his release on the principle that Ralph is a victim of the Vietnam War as much as his brother was.

A small, poignant little coming of age period film with sincere performances from everyone involved (including Winona Ryder, who plays Downey Jr. sister), 1969 has never been a classic, but it’s a fine document of the talents of the two lead stars at this time of their careers. The script and direction by Ernest Thompson doesn’t delve too deep or rely too much on melodrama, and fans of the period it’s set in should take a look. It has songs of the era, and has some light, comedic moments, but avoids (for the most part) the “teen sex” angle that teen films of the ’80s tended to use as a crutch.

Olive Films recently released a Blu-ray of 1969, and it’s a noted upgrade from the MGM DVD from 2002. The picture quality is clear and crisp in high definition, and it makes a fine addition to any film collector’s coming of age collection on Blu-ray. The trailer is also included.