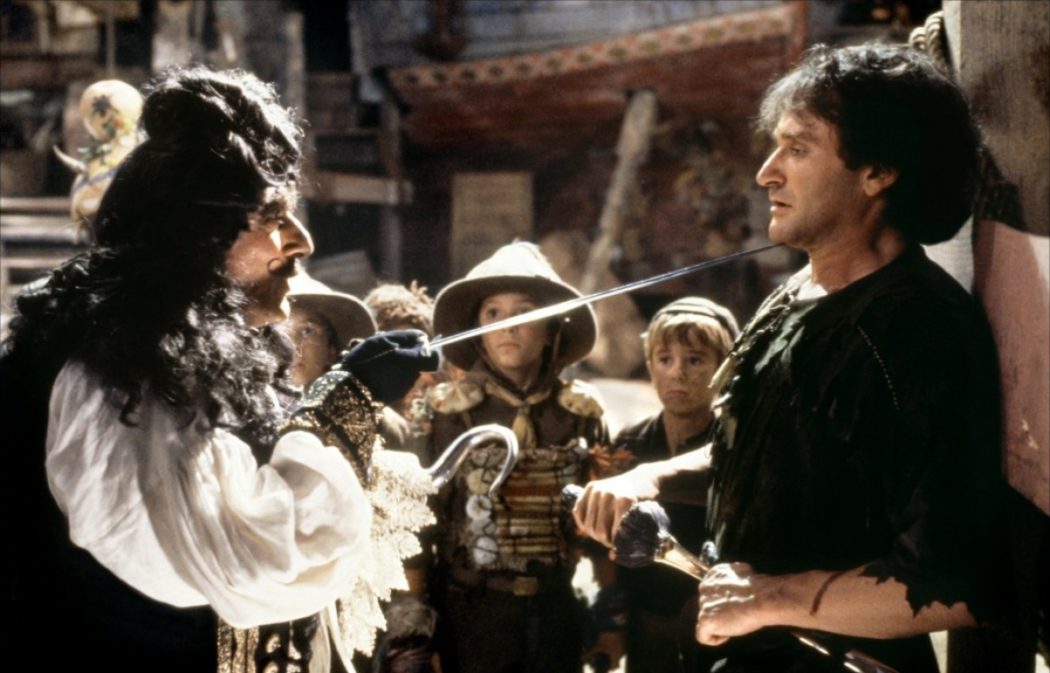 Plot: When his young children are abducted by his old nemesis, Capt. Hook (Dustin Hoffman), middle-aged lawyer Peter Banning (Robin Williams) returns to his magical origins as Peter Pan. Peter must revisit a foggy past in which he abandoned Neverland for family life, leaving Tinkerbell (Julia Roberts) and the Lost Boys to fend for themselves. Given their bitterness toward Peter for growing up — and their allegiance to their new leader, Rufio — the old gang may not be happy to see him.

Steven Spielberg’s Hook was given pretty poor reviews when it came out back in 1991 sitting at 28% on Rotten Tomatoes; I can understand why people wouldn’t love the movie as it can be overly sentimental, schmaltzy and the scenes involving children singing should be banned.

Despite the flaws however, I have always found Hook to be endearing, moving and most of all fun. It encourages us to not lose our inner child which happens to so many of us when we start work and forget how to enjoy our lives.

Dustin Hoffman eats up the screen as Peter Pan’s nemesis Captain James Hook with Bob Hoskins perfectly cast as his sidekick Shmee. Robin Williams was also well cast as a grown up Peter Pan who has lost sight of who he was and the film is all about him rediscovering himself.

John Williams is on vintage form giving us a wistful score that transports us away to Neverland and the beautifully colourful visuals also help.

It is overly cheesy and some of the scenes with the Lost Boys do grate after a while; it’s widely regarded as one of Spielberg’s weakest films and the director himself doesn’t talk about it fondly but to me this is vintage Spielberg. This was back when his movies were fun and had a wonderful playfulness that we rarely see anymore; it feels like Spielberg himself has actually lost his inner child only recently rediscovering it with Ready Player One.

Despite all the flaws Hook is still a movie I enjoy watching every few years (especially around the holiday season) so Sue Me! I love it and if you don’t then I’ll see your ass in court.