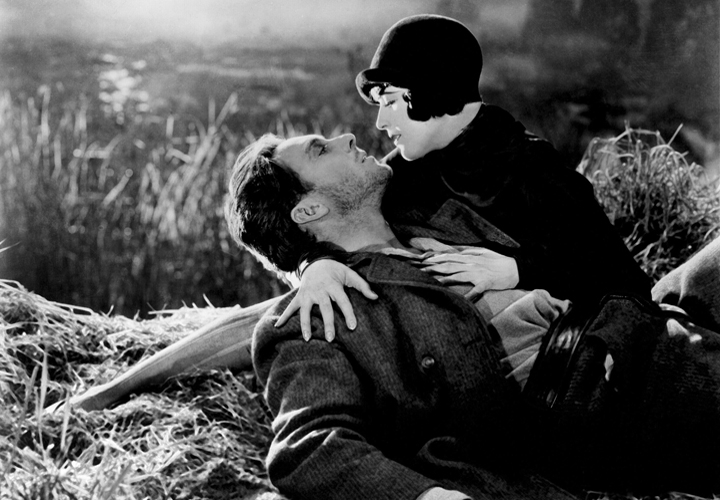 I wrote this piece over 10 years ago for my Art of Cinema Class so it’s technically the first film review I ever did; I hope you enjoy this blast from the past.

Plot: Bored with his wife (Janet Gaynor), their baby and the dull routine of farm life, a farmer (George O’Brien) falls under the spell of a flirtatious city girl (Margaret Livingston) who convinces him to drown his wife so they can escape together. When his wife becomes suspicious of his plan and runs away to the city, the farmer pursues her, slowly regaining her trust as the two rediscover their love for each other in this award-winning silent classic.

I would not normally consider myself a fan of silent cinema however, after viewing Sunrise I was pleasantly surprised. It was the first film to win an Oscar and by the end I could understand why. It is a German Expressionist film which uses stark and unusual lighting effects to tell the story; from the very start the film has a dark and foreboding atmosphere with the soundtrack creating a pervasive sense of dread.

The story is quite simple and opens by showing the lives of the protagonists. The husband and wife (Anses and Indre) are farmers with a young infant. Their attire is plain and of little value, their farm is large but largely unattended and meek, and their marriage is now one of few intimate moments. The husband has a mistress (who is only known as the woman from the city) which he sees as an escape from his otherwise mundane existence. Once she suggests that he drown his wife and pass it off as accident, he takes on a new perspective. The scene in the swamps where the husband and mistress meet works particularly well as the only light is from the moon providing the only source of visibility. This demonstrates the murkiness of their meetings and gives a dark and mysterious feeling for their scenes together.

The night before he plans to kill his wife he sees visions of the woman enticing him into doing it. When the moment comes he decides that he still loves his wife and they decide to reconcile and go into the city for a trip.

When the husband and wife are in the city I felt this was the most important part of the story. The scene where they are watching a wedding in a church was particularly affecting. The husband had an epiphany where he was overwhelmed with guilt for what he planned to do to his wife so he spends the day in the city with her to make it up to her. There is a scene in a barber shop where Anses and Indri are getting freshened up which I felt was another important scene.

The husband sees this and threatens the man with a razor making the viewer question his sanity. You begin to see that perhaps the husband would have been capable of terrible things however, it is not explored further until later on in the story.

After this the husband and wife act like newlyweds dancing and drinking and renewing what was lost from their marriage.

It is only at the end of the movie when the husband thinks his wife has drowned in a terrible storm that we see his dark side again, he finds the woman from the city and starts to strangle her. If he wasn’t interrupted by the grandmother he would have killed her as he saw her as being responsible for everything. This is a regular occurrence in German Expressionism films where the main characters seem disturbed while the story has an almost dreamlike quality, especially in the city scenes.

There is fantastic use if mise-en-scene throughout this entire picture with the first half being set in the rural areas and the second half being set in the city showing all the light and glamour of big city life compared to the drudgery of their previous life in the country. The film uses high key lighting during flashbacks while using panning and tracking shots at the same time. The first tracking shot is of a girl walking out of the door towards the camera, the viewer then discovers that this is the woman from the city.

Throughout the movie light and shadow plays a large part, conveying not only the mood but also the emotions of the characters as they go through the changes the story calls for.

The use of rural and urban settings with light and dark imagery is one factor used to demonstrate the ways in which our characters see not only each other, but themselves as well.

Overall, I found Sunrise to be a very affecting film and images will remain in my head for a long time to come. It is a haunting and memorable movie that is intense and somber while being heartwarming at the same time.