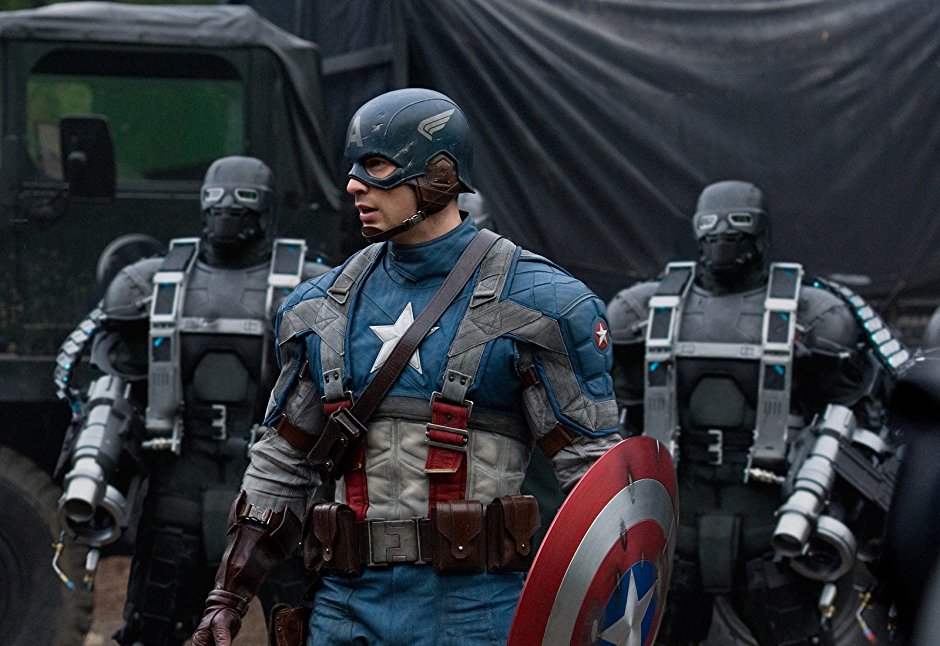 While Iron Man gets all the press and is considered the leader of the Avengers, I’m a fan of the big screen Captain America and think that he, not immature Tony Stark, is the guy who decides the Avengers’ fortunes. Not counting his Avenger appearances or his one-off in Thor: The Dark World, the red, white and blue hero has had three big-screen films to date: The First Avenger, The Winter Soldier and Civil War. As Civil War felt more like an Avengers movie (and I didn’t care for it too much, anyway), I’m going to break down Cap’s two solo forays into film to decide which is, in fact, the better film

Allies: Captain America has four main allies in the first movie: Peggy Carter (Hayley Atwell), Tommy Lee Jones (Chester Phillips), Sebastian Stan (Bucky) and Stanley Tucci (Dr. Abraham Erskine).  Let’s throw Bucky out the window first as he doesn’t really make much of an impression in the first film. Peggy Carter was so damn good in this movie, she got her own series (and let’s face it, Hayley Atwell is pretty perfect in almost every respect).  Tommy Lee Jones is hilarious in his role, having fun with it and cracking wise with his dry sense of humour. Stanley Tucci is always watchable, and his demise in the film is felt more than Bucky’s apparent death later in the movie.  It’s a good support system for Steve Rogers’ introduction into super-heroism.

Villains:  Hugo Weaving plays the Red Skull, and the man just doesn’t know how to put in a bad performance. Even though his screen time is limited, Weaving manages to make the most of his time, portraying the Skull as a megalomaniac who has superseded even Hitler’s dreams of a master race. While not physically Captain America’s equal, the Skull makes up for it to a degree by having an army at his disposal and an ultra-powerful weapon in the tesseract.  However, his lack of physicality and ability to match Captain America in hand-to-hand combat leads to one of the few disappointing parts of the movie.

The Story: As an origin story, this movie is top-notch.  It smartly shows our hero at his most vulnerable at the beginning of the film, an undersized guy with an over-sized heart. Without delving into cheesiness, Rogers is easily a guy you can root for, and the movie really sets up that he has as much brains as brawn when he figures out how to capture the flag during a training exercise, even though he is physically inferiour to everyone else. When he becomes a super-soldier, he becomes a beacon for the United States during the war, but still maintains his integrity and morals, despite the easy option to sell out. The hard part is making it all believable, and Chris Evans does a brilliant job, playing the role with an earnestness that keeps the character likable without inducing eye-rolling. You really feel for the guy at the end, when he wakes up to find most of his life has passed him by and he has lost almost everyone he loved.

The Action: Most of the action takes place after Rogers becomes Captain America but despite the imminent danger from HYDRA, the movie chooses to focus more on establishing the Captain America character than lensing any spectacular action pieces. The only two scenes that come to mind are the train battle where Bucky “dies” and the big scene at the end that starts in the HYDRA stronghold and ends on the Red Skull’s ship.  Both scenes are handled competently, though, for some reason, the Red Skull ends up accidentally killing himself instead of Captain America defeating his foe.  I have to assume that the filmmakers didn’t want Captain America killing anyone, but the lack of a definitive victory where the hero caused the villain to lose is a bit of a shortcoming.

The Allies: Captain America’s constant companion in The Winter Soldier is Scarlett Johansson as the Black Widow. Originally, I was not too enamoured with her character, as she did next to nothing in Iron Man 2. However, she redeemed herself in the Avengers and really came into her own in this picture. Understanding what it’s like to be a hero without a country, Black Widow is the perfect ally for Captain America to bring with him as everything he understands about this modern world begins to crumble. It also doesn’t hurt that Ms. Johansson is extremely easy on the eyes. The other main ally is Falcon (Anthony Mackie), a former paratrooper who befriends our hero.  Seeming to embody the same principles and goals as our hero, Falcon is instantly likable and engaging.

The Villains: We have Bucky returned from the grave as The Winter Soldier, an indestructible opponent, and assassin, who can match Captain America, punch-for-punch. Due to Bucky’s tepid characterization in the first film, there isn’t really the desired impact you’re supposed to have when Captain America discovers his nemesis is his life-long friend. That being said, casting Robert Redford as the other main villain, Alexander Pierce, was a stroke of genius. Redford is immediately identifiable in the role thanks to previous 70’s intrigue and paranoia films he appeared in, and while he’s not going to fight Captain America, he is charming, smooth and sinister as the puppet master who manipulates the events that turn Captain America from decorated hero to wanted fugitive.

The Story: This movie should be lauded for its daring in not following the usual superhero formula of “here’s the good guy, here’s the bad guy, now the good guy tries to stop the bad guy.” Instead, we have a movie of intrigue and mystery, as Captain America and the Black Widow attempt to unravel the chain of events that resulted in  Nick Fury’s assassination, and that has now led both heroes to go on the run. You could make the point that this is probably the best actual superhero story in any of the Marvel films as it cleverly leads the protagonist (and the audience) through a series of surprises that challenges everything they thought they knew about the Marvel Universe.

The Action: While having about as much action as the first film, the set pieces in this sequel seem on a bigger scale and thus more memorable. There are a number of skirmishes between Cap and Bucky, as well as a great sequence of Captain America escaping S.H.I.E.LD headquarters. The piece de resistance though has to be the multi-storied climax that sees Widow, Falcon, and Cap all battling enemies, some with sheer physicality and in Widow’s case, through craftiness. It’s a broader overall action experience in the second film that elevates it up to be a worthy successor to the first film.

The first film had engaging characters, walked the fine line between patriotism and corniness and managed to effectively introduce the title character to make him likable, which is a hard task these days when having a smart-alec attitude seems to be the norm. However, the second film really went out on a limb and dared to challenge everything we’d been told up to this time about the characters built through other movies and had a number of action sequences that make it stand out from its originator. Due to this daring and for effectively giving us a superhero movie that will probably never be matched, the winner, in this case, has to be The Winter Soldier.