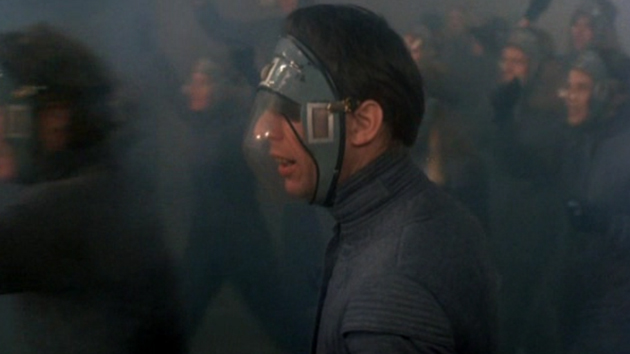 Z.P.G. is a well acted sci-fi thriller with a scary premise and it has never looked better on this Blu-ray.

Plot: Centuries into the future, the world is overpopulated and polluted and on the verge of collapse. The governments of the world are desperate and so make the painful decision to ban the birth of babies for 30 years. Brainwashing and robot substitutes are used to quell the yearning for children with the death penalty as the ultimate deterrent. Despite this, one couple has a baby.

Review: Some years into the future, the world has become a smog-filled dystopia where crowding and population growth has limited the natural resources to dangerous levels. All or most animals have become extinct, and the World Council declares that giving birth is now the most horrible of crimes to humanity. Childbearing is outlawed for twenty years, and if caught, those lawbreakers will be sentenced to death. In response to the need for intimacy with a child, the World Council gives families with such a need creepy, talking dolls that look as artificial as they sound. It doesn’t take long for some families to start breaking the law, and neighbors and friends are rewarded for turning in child-bearing families. One such family, who work in a museum as living historical exhibits (they act as if they were living in the seventies, complete with swinging sensibilities), decide to have a child. The woman, played very well by Geraldine Chaplin, has to hide from everyone she knows while she goes through her pregnancy, and her husband (Oliver Reed) carries on as best he can during the day, while spending nights with her. Their biggest enemies turn out to be their closest friends who discover their secret and blackmail them into sharing parental duties with them. The arrangement doesn’t last, though, because the neighbors (Don Gordon and Diane Cilento) want the baby for themselves. The neighbors break under pressure and turn them in, but Reed prepared for such an outcome. While the World Council Police does capture them, Reed and Chaplin (and child) manage to escape via subterranean tunnels and end up on a bomb-blasted deserted island.

This was a compelling film. The acting was excellent and I believed everything as it happened. The depiction of the smoggy world outside was strange and frightening. If people were forced to stop having children, then I can certainly understand that things might unfold the way they do here. This movie is so much more compelling than Children of Men that it’s a shame more people don’t know about this one. Though its fashions are a bit dated, I say give this a try. Written by Max Ehrlich and Frank Felitta. Directed by Michael Campus.

Kino Lorber’s brand new Blu-ray of Z.P.G. is a marked upgrade in every way from the previous DVD release from Paramount. The picture quality is crisper, and the soundtrack is more robust. Special features include an audio commentary by film historian Steve Ryfle, and some trailers. The cover artwork on the sleeve is the original one-sheet poster.