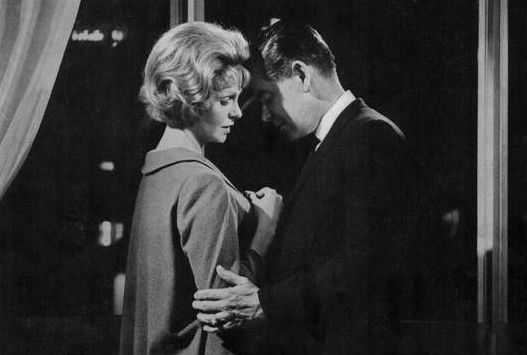 Dear Heart is an underrated gem that is worth rediscovering and this DVD is the perfect way to get reacquainted.

Plot: Single and alone, Evie arrives in New York for the annual Postmasters’ convention. Staying at her hotel is a womanising salesman newly promoted to his marketing department and trying to adjust to having become engaged. When his path crosses Evie’s, she wonders if this is finally the man for her, while her ways just seem to annoy him. At least to start with.

Review: More than a decade ago (maybe close to two), I caught Dear Heart on Turner Classic Movies and it blew me away. It’s a small movie in the intimate black and white mostly one-setting style like Billy Wilder’s The Apartment. It stars the wonderful Geraldine Page as the one-of-a-kind character Evie Jackson, a postmaster from Ohio who’s in New York for a Postmaster’s convention. She’s quirky, kind of annoying, but cute and underappreciated, but what’s got her gears working full time is that she’s single and always trying to find a good man to fall in love with. Staying at the hotel where she’s at is a greeting card salesman named Harry Mork (Glenn Ford), who’s recently become engaged to a woman he barely knows. Thinking that this weekend might be his last as a single man, he goes on the prowl for some meaningless female companionship, but by some accident he and Evie share a table together at a coffee shop and get to talking. They quickly form an unusual bond, but Harry senses that Evie is a little too unusual for his taste, and as the day wears on, he completely forgets about her, until he all but saves her (again, by accident) from a would-be creeper lurking outside her room. They talk some more and all of a sudden he realizes he may actually like her … a lot. What follows is a truly wonderful love story about two people who never should have met, but become a match made in heaven.

One of the all-time great, underrated love story movies of the classic cinema era, Dear Heart just never gets old. Page is so perfect in her role that I can’t understand why more people don’t know about this picture. The comedy is pitch-perfect, the characterizations and settings feel real and tangible, and Henry Mancini’s subtle score and theme song are enchanting. As far as I’m concerned, this is a classic film, suitable for everyone for all time. Directed by Delbert Mann.

Warner Archives released a nice-looking DVD of Dear Heart. The 1:85:1 black and white transfer is exactly what this movie requires. The Warner Archives on-demand service is exactly the right venue to release something as under-the-radar as this film. It’s the perfect way to discover so many great movies.