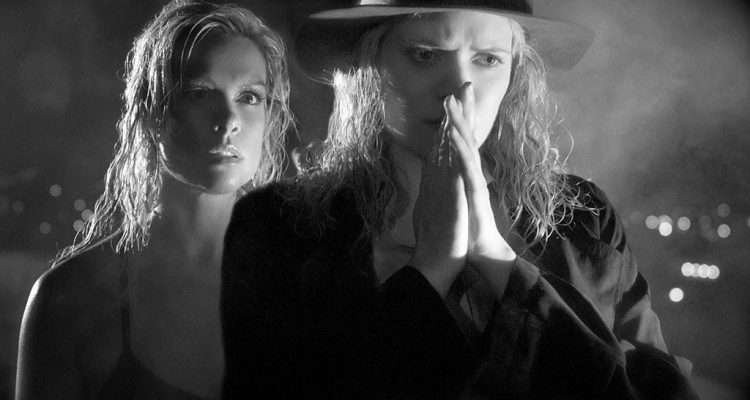 While it’s not a grandiose or fantastic piece of work, Yesterday Was a Lie is challenging and special for being so very unique, and it does its business in stark and clear black and white to a jazzy underscore.

Plot: Hoyle, a girl with a sharp mind and a weakness for bourbon, finds herself on the trail of a reclusive genius.

Review: A blonde detective named Hoyle (Kipleigh Brown) spends her shifts stalking the smoky streets of Los Angeles, chasing down elusive clues and leads to a suspect of a murder that is somehow intrinsically connected to her past, present, and future. She seems stuck in The Matrix or Dark City where events repeat themselves – either in her memory, in her dreams, or in deja vu – and she’s hunting some kind of algorithm for a formula that could change the course of history, but first she has to find an ally to help her solve the riddle of the murder case she’s working on. She meets another blonde – almost her doppelgänger – who sings at a local nightclub, a beautiful moll without a name (Chase Masterson) who seems to have all the right leads to her questions. They’re both of the same coin; Hoyle is the seeker and the singer is sort of her conscience or the angel / devil whispering over her shoulder, and their quest leads them to an old lover of Hoyle’s who may have cracked the time continuum somehow. With shadowy specters chasing them and trying to obtain a precious notebook full of numbers or codes, and with prowling felines skipping over puddles in the dark, Hoyle and her singer partner will eventually discover that there’s a world of answers awaiting them … and that yesterday was a lie.

I went into this odd lark of a film completely blind and without a clue as to what I was about to watch, which I believe is the best way to see most movies. Yesterday Was a Lie is a true original, with some homages to film noir pictures and intelligent science fiction films like The Adjustment Bureau or the few I already mentioned. It has big ideas that sort of spin around and levitate, whetting your pallet for intrigue and mystery. While it’s not a grandiose or fantastic piece of work, it’s challenging and special for being so very unique, and it does its business in stark and clear black and white to a jazzy underscore. By the end of the movie I probably had more questions than answers, but I admired it. From writer / director James Kerwin.

The newly released 10th anniversary Blu-ray edition of Yesterday Was a Lie comes in a beautifully remastered and restored high definition transfer, with some nice bonus material like an audio commentary, trailers, mini-docs and interviews, and more.