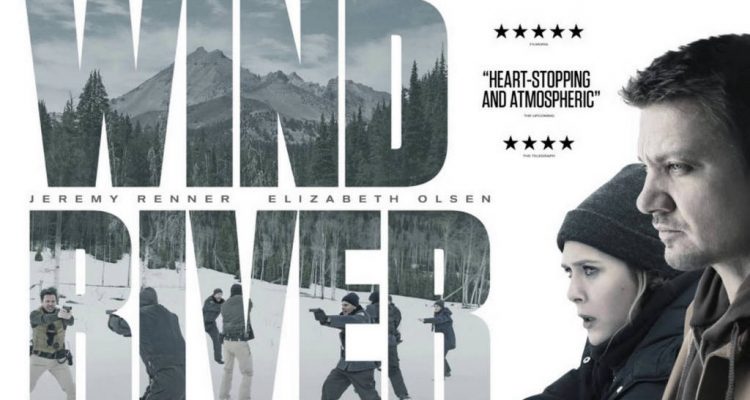 Wind River I don’t think I would want to sit through it as it’s unrelenting bleakness is certainly a downer.

Plot: An FBI agent teams up with a veteran game tracker to investigate a murder that occurred on a Native American reservation.

Review: Wind River is from the team behind Sicario and Hell or High Water so you know before you go into the theatre that you are in for quality entertainment.

Jeremy Renner and Elizabeth Olsen give career best performances in a challenging tale of life on a Native American Reservation in Wyoming where they investigate the rape and murder of a young woman. Advertised as more of an action thriller Wind River is really a crime drama and there’s only a little bit of action towards the end of the film.

This movie is all about the characters and Renner’s tracker Cory Lambert is a man haunted by the death of his daughter; when another local girl is found dead in the snow he agrees to help out FBI agent Jane Banner (Olsen) who is a little out of her depth.

Both characters are believable as they try to make sense of the world and this seemingly hopeless case where not only are the elements against them but also some of the people.

They get support from the always welcome Graham Greene who plays the Sheriff and is one of my favourite actors; he provides some of the few moments of levity to the picture with acerbic lines too.

Wind River is quite timely in that it is inspired by real events; the disappearances of various Native American girls who are never found or really investigated properly is on the news more frequently these days so hopefully this brings more attention to their plight.

Despite the rather grim subject matter Wind River is beautifully shot and captures the harsh landscapes of Wyoming but doesn’t really make it look like an appealing place to live either with the Native Americans feeling very much like a forgotten people.

The score is haunting and incredibly atmospheric with ethereal voices echoing throughout giving an almost mystical feel to the story.

The theme of grief is apparent throughout as well as the tensions between Native Americans and whites so there is always an underlying feeling of threat with the potential for violence at any time.

The final 30 minutes will have you on the edge of your seat and that’s when the action kicks in as well as a flashback containing a brief (but still disturbing) rape scene.

I would say that Hell or High Water is a film that I would watch again (and have done several times) whereas with Wind River I don’t think I would want to sit through it as it’s unrelenting bleakness is certainly a downer.