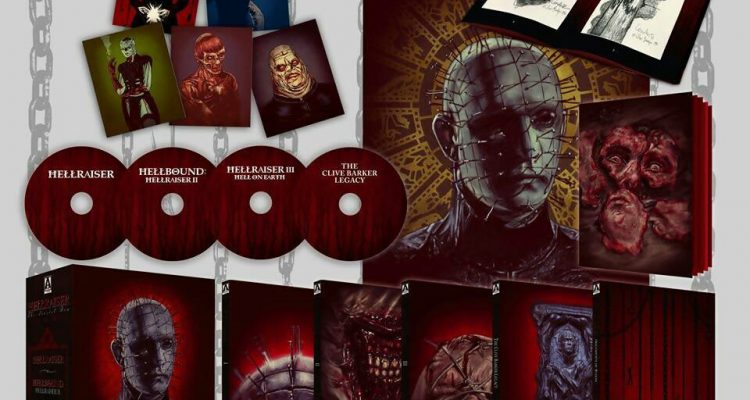 This is a strong dose of horror. Clive Barker’s first film is a true original. This box from Arrow is a Hellraiser fan’s dream come true.

Plot: An unfaithful wife encounters the zombie of her dead lover; demons are pursuing him after he escaped their sadomasochistic underworld.

Review: Clive Barker’s original Hellraiser (1987) was a game changer for the horror genre. It doesn’t follow any formulas, and it goes for broke in terms of pushing the limits of the genre as far as it can go. If anything can be said of Clive Barker, it’s that he is a true original, and that he reaches deep into darkness to bring his twisted imagination to life. The fact that Hellraiser became as popular as it became and spawned nine sequels (!) is a testament to the radical (yet relatable) nature of the first movie.

Hellraiser centers around a little configuration box that is a gateway to hell. Once opened, the box unleashes emissaries of Hades: creatures called Cenobites. They speak of pleasure, but what they really mean is suffering, and the individual who opened the box will be subjected to the worst suffering imaginable. A man with a kinky bent named Frank (Sean Chapman) opens the box, is tortured and dragged to hell, but his heart is left behind on accident under the floorboards of his house. Some time later, Frank’s brother Larry (Andrew Robinson) and wife Julia (Clare Higgins) move in, and almost immediately things go awry. Larry cuts his hand and bleeds on the floor, where his brother’s heart soaks up the blood and revives him by evil magic. Frank’s skinless form emerges from the floor and he beckons Julia, whom he’d had a passionate illicit affair with. Both sickened and attracted by his monstrous appearance, she vows to bring him fresh blood, helping him to regrow his skin. Larry, ever the cuckold, has no idea what’s going on in his own house, and when his teenage daughter Kirsty (Ashley Laurence) comes to visit, she is the first to realize that her stepmother is killing men in the house for nefarious purposes. Soon, the configuration box is opened again, and a cenobite named Pinhead (played by Doug Bradley) comes calling to claim Kirsty’s soul, but she makes a deal with him: She tells him that Frank escaped his clutches the first time, and that she’ll set Frank up to receive his due punishment in exchange for letting her go free.

Filled with eye popping elaborate gore and make-up effects, Hellraiser is a true gothic supernatural horror film. Like nothing else that came before it, this is a movie for the hardest of the hardcore horror fans, and for those looking to explore the depths of wicked imagination. For many years, Hellraiser was the one horror movie I was afraid to watch. When I finally watched it for the first time years ago I knew immediately that it was a strong piece of genre filmmaking, and it hasn’t aged at all and remains as prescient as ever.

Hellbound: Hellraiser II (1988) was rushed into production and tries going for a bigger and better approach. Released the following year, it has a much more grotesque storyline (if that’s even possible), with a kinky psychiatrist (Kenneth Cranham) building his collection of configuration puzzle boxes. When he receives a new patient (Kirsty, played again by Ashley Laurence), she also has in her possession a puzzle box that he adds to his collection. He uses his mentally disturbed patients in a blood sacrifice to unleash the skinless form of Julia (Clare Higgins), whose blood still remains on a mattress. With Julia resurrected, the doctor thinks he can somehow break the rules that divide flesh from spirit, and with Julia, they enter the realm of hell, looking to build a foundation with which they can have some sort of dominion over the dead souls therein. Young Kirsty opens up the configuration box, and thinks she too can enter hell so that she can find her dead father and save him from damnation. But by the time she gets there, Pinhead and the other cenobites have declared war on the doctor, whom they turn into a cenobite himself, which makes him even more powerful. There’s a cenobite war, and Kirsty is stuck in the middle of it.

More outlandish and certainly more wacky than the original, Hellbound is well produced, but it doesn’t have the classic feel of the first one. The gore effects are more disgusting and disturbing this time around, but at least Christopher Young’s score has a grandiose effect. Fans of the first one should be able to get into this effort, but if you start with this one you’ll be as lost as the characters in it are when they’re wandering around the labyrinth in hell. Director Tony Randell (Fist of the North Star) did what he could with the material, and the script by Peter Atkins emulated Clive Barker’s intent and got only about halfway there.

Hellraiser III: Hell on Earth (1992) is where the franchise started getting kitschy and silly. Pinhead (Doug Bradley), the cenobite from hell, is resurrected from purgatory when a kinky nightclub owner named J.P. (Kevin Bernhardt) ends up with the puzzle box and inadvertently sacrifices a young woman to the sculpture with Pinhead’s spirit attached to it. Pinhead demands more flesh to feed from, and so J.P. calls on a former lover named Terri (Paula Marshall), who has taken refuge with a local reporter named Joey (Terry Farrell). Joey, as it turns out, has already been alerted to the existence of the puzzle box after she witnessed a supernatural event at a hospital, and her curiosity for the phenomena leads her to the knowledge of more puzzle boxes and unexplained horrific events. She also begins having visions of her father in Vietnam and of the man who became Pinhead, imploring her to help him send Pinhead back to hell or hell itself will be unleashed on Earth. By the time her investigations come to a climax, Pinhead and other cenobites have crossed over and wreak havoc, racking up a mighty body count.

Director Anthony Hickox’s Hell on Earth looks really good with great make-up effects and a good score by Randy Miller, but the story gets looser and wackier the longer it plays out. By the time Pinhead starts walking around the city and killing everyone in his path, you know the movie has entered into MAD magazine territory. Doug Bradley is given more lines and more screen time than before, and while that’s all understandable, it begins to feel like the filmmakers were wanting to put him in the same class as his counterparts like Freddy Krueger and Chucky the homicidal doll. I enjoyed this film as much as I suppose I could (the hard rock soundtrack is distracting, but kinda cool), but it pales in comparison with the original.

Arrow Video recently released a four-disc set of the first three Hellraiser films entitled “The Scarlet Box.” The films are presented in a new 2K restoration, and the third film has an optional unrated cut with full-frame unrated scenes (taken from the laserdisc) edited back in, which is neat. The fourth disc – “The Clive Barker Legacy” – contains Barker’s short films, and documentaries. Each disc comes jam packed with commentaries, documentaries, and jillions of archival images and bonus material. Also included in the hefty box is a sweet hardcover book with a history of the franchise and original press releases from the movies. Also included are postcards and a poster! It’s a Hellraiser fan’s dream come true!