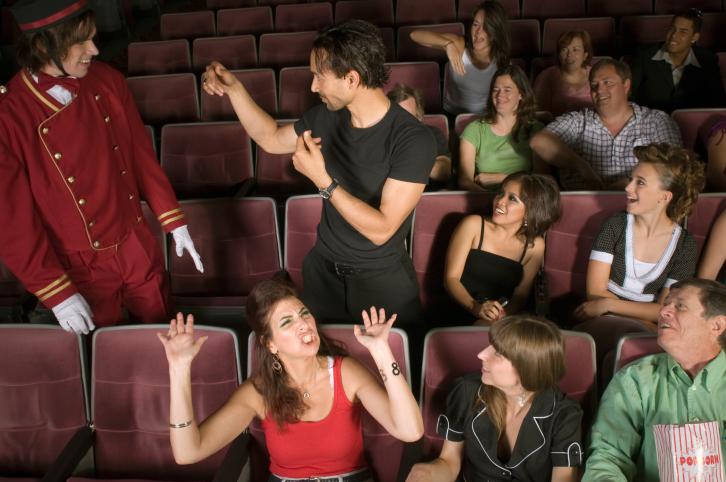 Why Go to the Theatre Anymore?

Reading Eoin Friel’s recent blog about the death of etiquette in movie theatres really struck a nerve with me. In my forty years on this planet, I’ve been to many a different movie theatre.  I used to really enjoy it, spending two hours sharing an experience with total strangers that could nevertheless help make an impression or a mark on the popular culture landscape.  You never know when you’ll watch a movie that becomes legendary like Star Wars or the Indiana Jones movies (at least the first three) or uncover a hidden gem like The Monster Squad or Krull.  Going to the theatre was an event to look forward to.

Now… not so much.

But why? What has changed for the experience to lessen? Well, there’s a myriad of factors to consider.

Firstly, it’s the uniformity of everything. Once upon a time, movie theatres had character. There would be some with balconies, they would have giant movie props in the lobby and the popcorn tasted fresh, the butter on it real. Now, all movie theatres pretty much look the same, have the same standees and advertisements in the lobby and everything just looks, smells and feels… manufactured.  It’s almost like going into an office building now, with a pimply-faced kid behind the counter asking if you want to pay an extra 50 cents to super-size your order. There’s no uniqueness to the experience, it’s all factory-built and synthetic. Think of the last time you went to a movie theatre where the building itself made any sort of impression on you.

Second, you now have more options than ever. Back in the day, before VHS (or God help me, Beta), there was nothing, except television and that wasn’t all that great either. Now? You’re kidding, right? You don’t want to see it in the theatre? No problem! Wait for the Blu-ray, or get an android box or wait for it to hit Netflix. There are so many options now, both legal and illegal, to watch any movie you want and pay whatever you want (if anything) for it, that there’s literally no reason to go to the theatre. Think of it this way: you want to get out of your pyjamas, brave traffic, go down to the theatre, have to get into line if you want any food, overpay for that food, then try and find the optimal viewing seat, then pray that no one comes to annoy you… or… you can stay at home, pause the movie if you gotta take a leak or fix a snack and play the sound however loud you want it. Which sounds better to you?

Then you have the people. Eoin eluded to this (and yes, I agree that horror movies have more annoying teenagers there, mostly because that’s who horror movie filmmakers are trying to attract to their feature – hence the teenaged protagonists, multitude of jump scares and other cheap tactics that don’t actually show anything and the formulaic and recycled plots) and I have to agree.  People are just inconsiderate goofs, these days.  There is absolutely no reason why you have to turn on your phone and scan your texts in a darkened theatre and annoy everyone around you, unless you’re something like a brain surgeon, cop or firefighter (and if you’re one at fifteen years-old, then you should be on the news). There is no reason to carry on conversations about cute boys or hot girls or what so-and-so said to you yesterday during the theatre. That is just rude and disrespectful to the people around you. Not only that, you paid to do it! You can do it for free outside the theatre! So, you can add stupid to that list. In a movie a few weeks back, a young couple sat in front of me and made out for the entire length of the picture – roughly 2 and a half hours. There is an endless list of places that this couple could have chosen to do the exact same activity – for free. However, they chose to pay and then annoy everyone who sat behind them.  As Eoin pointed out, it’s not as if the ushers are any help, either – they rarely show up in the theatre anymore and going out to find one when you need one is akin to finding the Holy Grail. If it’s a choice of seeing a movie with other people and watching a movie by myself, I’ll pick the latter option, every single time.

Finally, let’s talk about the price. Back when I went to the theatre as a teenager, it cost $4.25 to get in (matinee prices) and 4.25 for popcorn (with real butter!) and a small drink. Now? $4.25 might get you the small drink…might. I go to the concession stand and find myself forking over $10 for a small popcorn (with fake butter) and a small drink.  It’s almost like you got robbed and got a good helping of carbs and sugar to boot. That’s not even counting the $13-14 bucks to get in (and that’s not even being forced to pay 3D prices) and it’s no wonder that Tuesday “cheap” nights are so well-attended – that’s all anyone can afford! So you can do all that…or pay that price per month and get a Netflix account.  Then you can see all the movies you want for the price that wouldn’t even get you in for one these days.

So, ultimately to get back to my original question – why go to the movie theatre? I guess if you have a job that relates to movie reviews, you have no choice.  However, if you’re a casual (or even avid) movie-goer who just enjoys watching movies, there’s absolutely zero reason. As there are far more casual movie-goers than people who write movie reviews for a living, it sounds like movie theatres will eventually go the way of the dodo bird… and they have no one to blame but themselves.