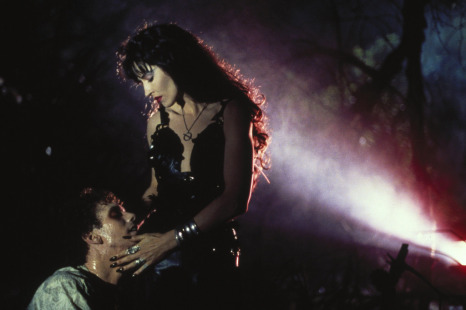 Pretty gory and sexy for a low budget flick. Kino Lorber pulled out all the stops for this release.

Plot: An evil spirit assumes the disguise of a beautiful young woman, so it can seduce and kill men.

Review: An ancient evil embodied in a voluptuous woman has awakened after a millennia of being dormant. The evil is the original woman – Eve or Lilith (plyed by model Isa Anderson) – and her quest to seduce and slay every man in her path takes a calculating turn when she realizes she’s awoken in the future world of 1989, where modern accouterments have made life easier for humanity. She sets her sights on a trendy fashion magazine called Siren, where she sees herself as “coming out” to the world at large, if she can only get herself on the cover of the magazine. She works her way through the editor and the photographers and designers, making love to them first before brutally killing them. One of the designers (played by future Mortal Kombat star Linden Ashby) has been having severe nightmares about her, and when she shows up he knows she’s up to nefarious no good, but she’s an unstoppable force of nature. He gets some assistance from an old witchdoctor who has been waiting for her to awaken, and together they might be able to put an end to Lilith’s reign of terror.

A surprisingly sexy and gory shocker from Canada, Night Angel is a new title to me. I’d never heard of it until Kino Lorber’s new special edition release, and it was refreshingly zany and bizarre, with phantasmagorical scenes of nightmarish horror in the tradition of Clive Barker and Brian Yuzna. Steve Johnson provided the make up effects, and director Dominique Othenin-Girard (Halloween 5) gave the film plenty of style and music video-looking flare. Granted, there are some laugh-out-loud moments of unintended hilarity (early scenes where Lilith is dancing at a nightclub and wooing every male patron in the joint had me in stitches), but the movie manages to be a potent little creature feature with strong gore scenes and some cool surreal moments. An added bonus is seeing future creature character star Doug Jones in a supporting role where he gets to put on a ton of make up and die a horrible death.

Kino Lorber’s new Blu-ray is fully loaded with special features, including two audio commentaries, on-camera interviews, trailers, and behind the scenes material. The best way to go into this movie is cold so that it all feels fresh, and the bonus features were fun to sift through. The HD transfer is crisp and attractive, and I can’t imagine this movie ever being released again in such a bounteous edition.