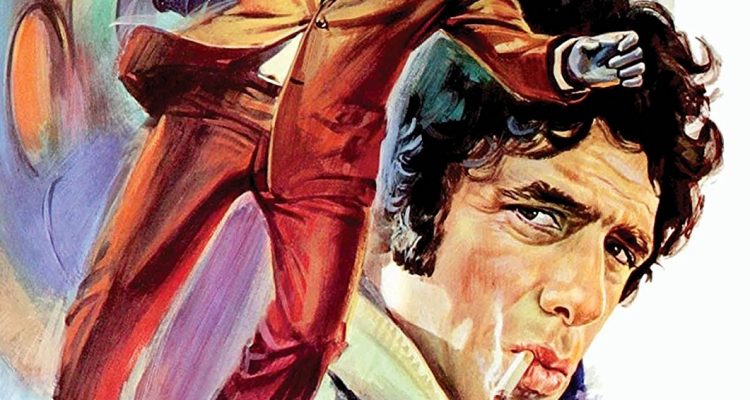 It’s very odd and I’m not sure who the movie is aimed at but there is some mild suspense.

Plot: After American scientist is severely injured and scarred in a car crash along the border with East Germany, he is captured by East German military. The scientists use metal implants to save him. Once back in the States no one can tell if it’s really him so an intelligence specialist must determine who is under the “mask”.

Review: A blazing car crash by the Soviet border kills an American scientist named Martino, but some time later, American intelligence gets word that Martino is alive. An FBI agent named Rogers (Elliot Gould) is assigned to the case, and he collects the man claiming to be Martino (played by Joseph Bova) and takes him to a holding center where he’s grilled for a period of months. The man claiming to be Martino is an unrecognizable specimen: He’s been outfitted with a new metallic face, body, and arm, while the rest of him may or may not be human. He swears that he’s Martino, but Rogers and the rest of the intelligence community (including the Russians, who seem to be baffled) are sure he’s lying and could be a weapon of mass destruction, if only they could fathom how an ordinary man could transform himself into a cyborg. Rogers and the man claiming to be Martino test each other by will and perseverance, but which one will eventually fess up and admit the other is telling the truth or is lying?

An extended chamber piece with some mild suspense (there’s a car chase in the middle) sprinkled throughout, the odd Who? is a curiosity, if nothing else. It’s a strange story to begin with, but to see the bizarre make-up and costume design of the robot man featured as a main character is interesting, if a little redundant. It might have been more fascinating to never quite see the robot man in full light, but the movie isn’t shy about showing him to us. The movie has a satisfying conclusion, but it doesn’t really add up to a whole lot. Directed by Jack Gold.

Kino Lorber recently released a Blu-ray of Who?, and it looks nice with a high definition transfer in 1:78:1 widescreen, and it comes with an audio commentary by the director. I’m not really sure who this movie is for these days. If you’re reading this review and have made it this far, then perhaps it’s you who should track this disc down for a purchase.