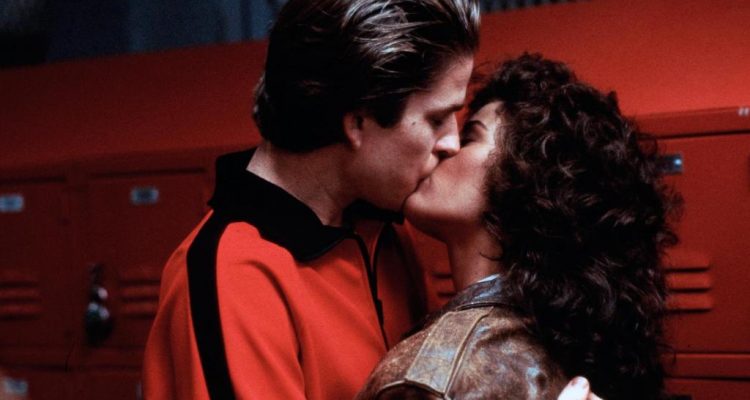 Great story, perfect performances. A classic in every way. Finally, there’s a Blu-ray!

Plot: A high school wrestler in Spokane, Washington has trouble focusing on his training regimen when a beautiful young drifter takes up temporary residence at his home.

Review: On his eighteenth birthday, Louden Swain (Matthew Modine) decides that this is his year to be a hero. He’s already a high school wrestling star in his weight division, but when he makes a switch to drop two weight levels to 168 pounds to go up against the undefeated champ of a rival school, he really goes for broke by starving himself and working out like there’s no tomorrow. His home life is humble, and he keeps his ego in check. His dad (played by Ronny Cox) is an out-of-work auto mechanic, and his mom is MIA with the man she had an affair with. Louden’s best friend is Kuch (Michael Schoeffling from Sixteen Candles), an abused teen who wishes he were part Native American so that all his big talk about “vision quests” and going on the warpath had some depth and meaning. One night, while out with his father, Louden inadvertently comes to the rescue of a worldly woman named Carla (Linda Fiorentino), a drifter without a ride or a place to stay. He invites her to stay with them in their spare room, and she takes them up on that. Over the next few weeks, as Carla tries to get her bearings, Louden becomes infatuated with her, and he loses sight of his goal to drop the two weight classes because he gets sidetracked with her. Carla (who’s three years older than he is) senses that she’s become an innocent obsession for Louden, but she never leads him on and she’s sensitive enough to realize that perhaps they both need each other at this particular time of their lives. With his big match just days away, Louden must offset his physical imbalances (he begins having nosebleeds and fainting spells) by balancing his own feelings for Carla, who may just be the right person to help him through this trying season of his life.

One of the very great teen films from the 1980’s, Vision Quest has such inspired performances in it. Modine is nuanced and charming as the understated Louden, and Fiorentino is fantastic as the young woman who guides him through to manhood. The relationships between all of the characters in the film feel very real, and the pop soundtrack and the synthesized score by Tangerine Dream all evoke the time and place indelibly. The story is told from a first-person perspective (just as the novel by Terry Davis was), and the direction by Harold Becker is spot-on terrific. I love this movie. It’s a personal favorite. Also with Daphne Zuniga (The Sure Thing, Gross Anatomy) in a small, supporting role.

Vision Quest was one of the first DVDs to be released from Warner Brothers at the dawn of the digital era. It was released in a frustratingly full-frame format, and it took many years for Warners to release a widescreen edition, which was released as part of their “on demand” DVD series a few years ago. Just recently, though, Warner Archives released a beautiful high definition Blu-ray of the film, and it will be considered the ultimate edition of the movie on home video. It’s affordably priced to own.