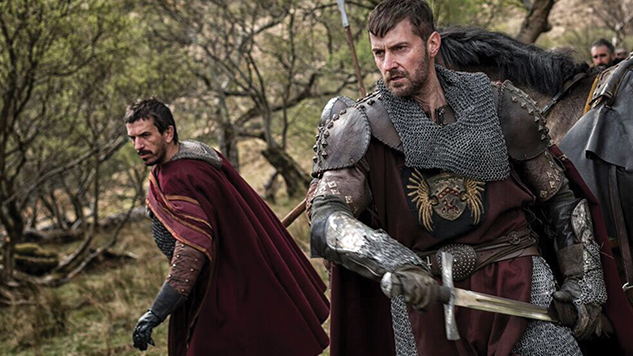 Brendan Muldowney is the director of the new adventure drama Pilgrimage starring Tom Holland, Jon Bernthal and Richard Armitage.Set in the 13th century, it tells the tale of Irish monks that embark on a reluctant pilgrimage to escort their monastery’s holiest relic to Rome. Their mission soon becomes fraught with danger as they trek across a rugged landscape that’s been ravaged by years of tribal warfare.

Brendan stopped by the Movie Elite to discuss the movie.

How did you get involved with your new movie Pilgrimage and what made you want to direct?

The writer, Jamie Hannigan, pitched me the idea of monks travelling through 13th century Ireland dragging a relic and they are ambushed. I liked the period in Irish history which hasn’t really been explored before, I liked the religious and political themes, I liked the fact that we could utilize the Irish landscape and I liked the suggestion of an ambush and some action.

Was the script ready to shoot when you got it?

No, first it was a pitch. Then a treatment, which was submitted to the Irish Film Board and then it went through a development process which took 4 or 5 years with as many drafts. I worked closely with the writer throughout the whole process.

You’ve got one of the best casts of the year; can you talk about getting all of them together?

It was a combination of our casting director Dan Hubbard and XYZ Films, the executive producers that dealt with the agencies and got cast books put together for me. I watched Tom Holland in ‘The Impossible’ and ‘How I live now’ and thought he was excellent. I had a Skype call with him and offered the role to him on the spot. Jon Bernthal and Richard Armitage were cast soon after from the same agency – WME.

Was it daunting at all?

Many things were daunting. It was an incredibly ambitious project for a relatively small budget. We were dealing with period costumes and production design, horses, stunts and fights, water and boat work, SFX, VFX and four languages, not to mention 100% of the shoot would be exterior and at the mercy of the Irish weather. We had to be clever and work out the best and cheapest ways of shooting the script. I put a lot of work into location scouting and my own directors prep.

Are there any movies or stories you’d consider an influence on Pilgrimage?

How much research was required in terms of costumes and set design?

A lot. The writer Jamie had 5 years of research. I started reading selected books about a year before and my Production Designer, Owen Power, began research and discussions with me about 6 months before shooting.

Did the weather behave itself for the shoot and what was the toughest day?

No. The weather did everything in opposite to what we wanted. The first day of shooting was a gale force storm with high winds and rain. Then we had 2 weeks of a heatwave. Most of those scenes that were filmed during the heatwave are cut from the finished film due to pacing issues but it is just as well as it made the journey look like a picnic. The only scenes remaining are the ones from the opening on the beach to the monastery. There is a scene on a mountain where a storm is brewing and there is a lightning strike. This was one of the sunniest days so we had to work hard in grading/coloring to take out the warmth (couldn’t get rid of shadows), and we had to place all the storm clouds into the sky. In general, we had to expect to be rained on at least once a day. The storm clouds would suddenly arrive then be gone 15 mins later.

Did the final film come out as you’d envisioned and was there anything you had to cut out that you particularly regret?

The very nature of filmmaking is that the process itself evolves all the initial ideas. What you are hoping for is that the overall tone and general feeling you had about the film survives and I think it did with Pilgrimage.

As regards regrets… you will always wish for more time and money. If I had more I would have had more scale, more extras, and longer to shoot the action scenes so that they could have a bit more finesse.

What do you want audiences to take away from the film?

I hope they enjoy the unique setting of monks on the edge of the known world at the time, the exploration of religion and politics, and a good old fashioned action thriller.