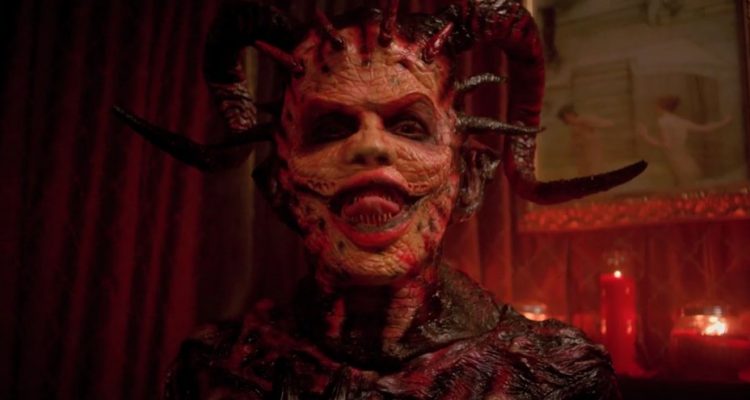 Borderline amateurish. It treats suicide and bullying very haphazardly. There’s no suspense or originality to it.

Plot: After becoming the victim of vicious cyber bullies, Lisa makes a deal with the devil to exact revenge on her tormenters.

Review: Bullying and suicide have become an epidemic. We see it on the news almost every day: kids at school are being relentlessly harassed on social media, leading to suicide. It’s horrible. When it’s presented in movies and TV shows, I can’t help but wonder if presenting bullying and suicide doesn’t perpetuate the problem. Which brings me to the low budget horror film Devil’s Domain, an ultra sensational and somewhat amateurish production from director Jared Cohn, who fared better with the Rambo-meets-Hills Have Eyes flick The Horde. Here, he presents a ruthlessly bullied anorexic and self-cutting teen named Lisa (Madi Vodane), who is pushed to the brink of suicide by her heartlessly cruel tormenters in high school. Just before she loses control, she’s visited by an attractive Victoria’s Secret-looking babe, who promptly declares that she’s the devil and that she has a deal for Lisa. The Devil (played by Linda Bella) will dispose of Lisa’s tormenters one by one and grant her fame and fortune if Lisa will have the Devil’s child. Lisa, who by now has nothing to lose but her soul, agrees, instigating the horrible and yet satisfying (to her) events that follow: Her tormentors all meet graphically gross ends (some are tortured to death, while others meet grisly horror-movie-style fates), and Lisa essentially forfeits her soul and allows the Devil to use her, but in the trade off she becomes “the most famous person in the world,” as the Devil promises.

I’m always game for indie horror films. Sometimes, if the filmmakers and performers are very talented, you’ll get something like Lucky McKee’s May or Rolfe Kanefsky’s Nightmare Man, both ultra low budget horror films that blew my mind when I saw them both theatrically. But then, on the other end of the spectrum you have something like Devil’s Domain that grovels in trash aesthetics and aspires no higher than what’s written on the page. The performers aren’t really engaged, and the script by director Cohn isn’t savvy or special in any way. There’s a real lack of intelligence to the script, and everything plays out without suspense or originality. The gore violence is there for the sake of the gross out factor (which is boring and garish), and as I was listening to Cohn’s stoned-out commentary track I realized with stark clarity that he is hopeless as a filmmaker. He’s never going to improve because he thinks that what he’s done here is fantastic. Seriously, though: His audio commentary for this film is awe-inspiring in its stoned-out drawl.

MVD Visual and Cleopatra Entertainment has just released a DVD and a Blu-ray for Devil’s Domain and is reasonably priced to own.