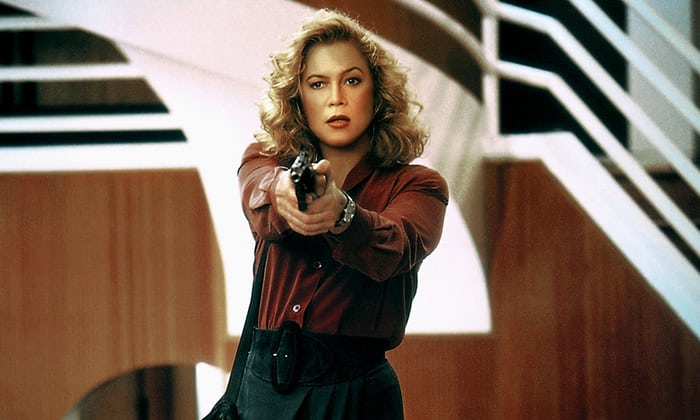 Turner is great in the lead. A solid start to a failed franchise.

Plot: A female PI babysitting for a boyfriend gets stuck with his daughter and the case of her murdered father.

Review: Tough on the outside but a softy inside, female private eye V.I. Warshawski (Kathleen Turner nailing the role) meets a guy a bar in passing, they hit it off, and the next thing she knows she’s doing him a favor by watching his teenage daughter for the night. It’s not how she saw her evening going, but the next thing she knows the guy is killed in an explosion and she’s stuck with the dude’s daughter, a wiseass potty mouth named Kat (Angela Goethals). Kat hires her to find out who killed her dad, and before she can do a proper investigation she’s threatened by local shadowy figures and attacked by thugs and told to lay off the case. But V.I. is no pushover and she starts caring for the girl she’s supposed to protect, and as she starts investigating she realizes that it’s the girl’s own mother who might be behind all the bad mojo going around.

A one-shot effort to bring author Sara Paretsky’s long-running mystery series to the big screen, V.I. Warshawski is a fairly small-scale action thriller with a then-superstar Turner (who was perfect for the role) at the center of it. She turns in a very physical performance and Jeff Kanew’s breezy direction and Randy Edelman’s fun score all make the film an easy watch. There’s not much of a mystery to the story, but it’s fun watching the characters go through the motions. Though there was never a sequel to the film, Turner reprised her role in a BBC audio drama for another Warshawski adventure a few years later.

Kino Lorber’s Blu-ray for V.I. Warshawski looks pretty sweet, and I’ve owned the film on VHS and DVD, and this is obviously the best looking of the bunch. It was previously released on Blu-ray from Echo Bridge, but I can’t speak for that release as I never owned it. Kino’s release contains a newly recorded audio commentary by director Kanew, and the theatrical trailer.