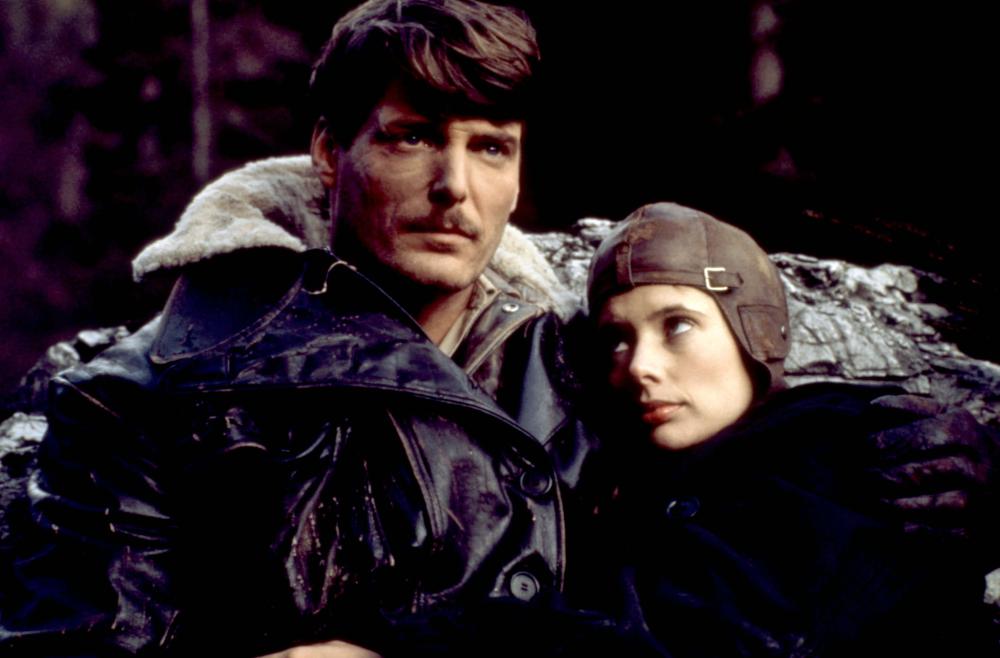 Plot: A 1920s mail pilot and a rich man’s daughter crash-land on a mountain full of hungry wolves.

Review: Following World War I, an emotionally scarred pilot named Edgar (Christopher Reeve sporting a dapper mustache) avoids human contact at all costs, and as a mail carrier pilot he’s thus far been able to leave a solitary, no frills life. When his boss (played by surly Jack Warden) starts evolving with the times and allows human passengers on flights, he gives Edgar his first passenger: a wayward teenage girl who is to be transported several states over. The girl is the irreverent chatterbox named Tillie (Rosanna Arquette playing a 16 year-old), and Edgar has an immediate dislike of her and the fact that he must comply with his boss’s orders. On the second leg of their journey, their plane crashes in the wilderness in harsh conditions, and Edgar is forced to keep himself and the irritating girl alive as they’re surrounded on all sides by ravenous wolves and dwindling supplies. Lost in difficult terrain and with little to no hope of being found by search parties, these two must rely on each other to survive their way back to civilization.

A handsome production with strong characterizations and a beautiful score by Dominic Frontiere boost The Aviator to another level of entertainment value. Reeve and Arquette are fun to watch, though their characters hate each other, and the cinematography and scenery really lend themselves well to this old-fashioned adventure story, which was based on a novel by Ernest Gann. Director George Miller (The Man From Snowy River) does a fine job with it all, and the film has aged quite well.

Kino Lorber’s new Blu-ray of The Aviator contains a great looking HD transfer, and though there aren’t any extras on the disc, it makes for a nice addition to anyone’s physical media collection.