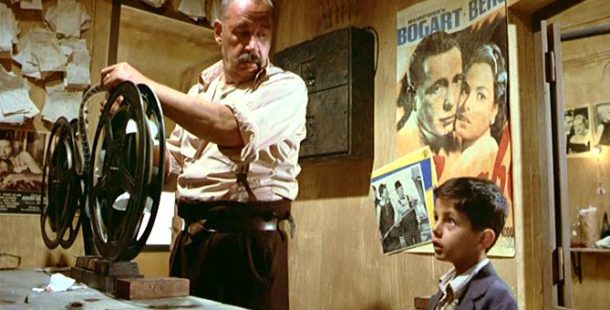 A classic film. One of the greatest coming of age movies of all time. Arrow’s release is exemplary.

Plot: A filmmaker recalls his childhood when falling in love with the pictures at the cinema of his home village and forms a deep friendship with the cinema’s projectionist.

Review: A filmmaker named Salvatore (Jacques Perrin) living in Rome who hasn’t been back to his hometown in 30 years is called by his mother who tells him that a father figure he loved very much when he was a boy has passed away and that the funeral is in a day. The man reflects on his life as a boy and a teenager: As a boy (played by Salvatore Cascio) he lives with his grieving mother, who has been waiting for her husband to return from the war, and Salvatore’s greatest passion is the movies and going to the cinema where the projectionist, an old codger named Alfredo (Phillipe Noiret), takes him under his wing and teaches him over the course of his childhood how to operate the projector. Through the boy’s eyes we see the small village over the years and everyone in it. As Salvatore grows up into a teenager (played by Marco Leonardi) he learns how to use an 8mm camera and he becomes enamored with a beautiful young woman in town who captures his heart. He eventually joins the military and returns home, changed and mature, and upon Alfredo’s stern advice, he leaves home, never to return again. As an older man, Salvatore comes back home to attend Alfredo’s funeral and remembers it all once again as the nostalgia overwhelms him, and he realizes that Alfredo was his best friend and the closest thing to a father he ever had.

An incredibly moving and affecting movie about the magical experience of going to the movies, Giuseppe Tornatore’s Academy Award-winning Cinema Paradiso might be one of the greatest coming of age movies of all time. It relies heavily on nostalgia and the cinematic experience in telling its sprawling story that covers three stages of the main character’s life, so if you can handle the romanticizing of youth and film, then this is surely a movie for you. Ennio Morricone did the score, and the movie is timeless.

Arrow Academy’s recent two-disc Blu-ray release of Cinema Paradiso contains both versions of the film: The 124-minute theatrical cut, which I prefer, and the 174-minute director’s cut, which fleshes out the characters and contains more footage of the adult version of the main character. I’ve seen both versions theatrically and I love both cuts, but the tighter cut is my preferred version. Arrow presents both cuts in a newly restored transfer. Included in the special features are an audio commentary by the director, several documentaries, and some choice featurettes. Also included are trailers and a reversible sleeve with two different cover artworks.