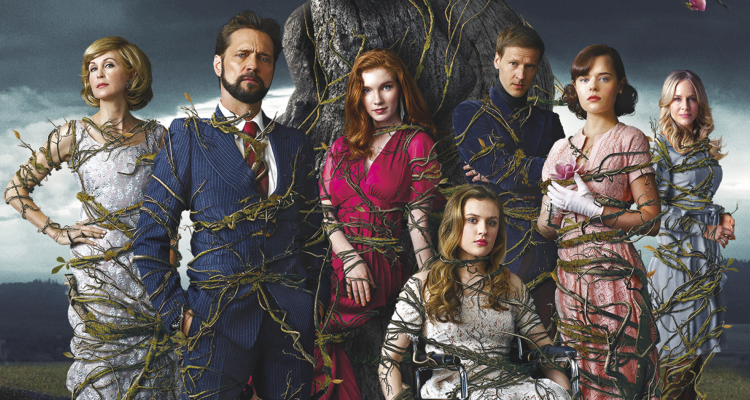 Even if you’re not into watching Lifetime Channel movies, this series is worth watching. Themes of incest and family taboo run through the entire series, but there’s still something compelling about the movies. You might be surprised by the quality.

High schooler Heaven Leigh Casteel is the eldest of five of Luke and Sarah Casteel, they living in the backwoods outside of the small town of Winnerow, West Virginia.

Ah, the truly messed up melodrama of V.C. Andrews! Originally written in 1985, Heaven is the first of two novels she wrote in a proposed series of five books, and she was working on the third one Fallen Hearts when she died in 1986. In the first one (set in the ’60s), her main character is Heaven Leigh (Heavenly: get it?) Casteel, who lives like a hillbilly with her alcoholic father and exhausted stepmother and all the children they had together. There are half-siblings too, and it’s difficult to keep track of who is who. Heaven (played by Annalise Basso) is relentlessly teased at the high school she goes to because she’s smarter and prettier than anyone there but comes from low grade stock, or so everyone thinks, and when her grandmother passes away, it’s the beginning of a new era for Heaven, whose world is shattered when her father begins selling off his children to make ends meet. Heaven is the last to be pawned off, and it’s good timing too because her father begins to have incestuous tendencies towards her. She’s given to an attractive, wealthy woman named Kitty (Julie Benz), who on the surface seems great, but deep, dark resentments reveal that she’s a head case with violent tendencies. Her husband is a handsome, housebound would-be novelist (played by Chris McNally), and over a period of months, Heaven and Kitty’s husband begin having an affair. Weird, as it also feels incestuous even though technically it’s not. When that relationship boils over and ends in tragedy, Heaven becomes homeless, but she’s lucky because her obscenely wealthy long-lost grandparents have sent for her. It ends with Heaven getting on a bus to meet them.

As adapted for the Lifetime Channel, V.C. Andrews’ Heaven moves very quickly for an 89-minute feature, and as it has a ton of ground to cover and lots of characters and relationships to cycle through, it’s a little confusing if you haven’t read the book from which it’s based on. Basso is pretty good in a somewhat difficult role, and it’s weird seeing her as a sex object, considering she was only a kid and making kid movies a blink of an eye ago. The series continues on with Dark Angel, and Basso reprised the role two more times in the five-film series. Andrews was clearly obsessed with incest and twisted relationships amongst teens. This one was directed by Paul Shapiro.

Based on the second book in the Casteel Series, Heaven has finally found the new life she always dreamed of with her newly discovered grandparents. Upon closer inspection, beauty and riches hide sinister secrets Heaven has tried desperately to rid herself of.

Picking up right where Heaven left off, Heaven (Annalise Basso) is dropped off by bus at her grandmother’s sprawling estate where her grandmother’s husband Tony Tatterton (Jason Priestley) somewhat coldly offers her a weekend retreat, where she was fully expecting to permanently reside. After an appeal with her even colder grandmother (played by Kelly Rutherford), Heaven is granted a permanent residence on a trial basis. She must attend a posh girls’ academy and achieve the highest level of grades, and when Heaven turns out to be a great student who’s well-liked by her teachers, she’s allowed to live on the estate on the weekends when she’s not living at school. By a twist of fate, she meets Tony’s brother Troy (Jason Cermak) who lives on the Tatterton grounds in secret, and they fall in clandestine love, despite their age difference (she’s not yet 18). They decide to marry, and after months of carrying on, Heaven announces to Tony that she’s going to marry his brother, which complicates matters for the family. Turns out (surprise!) Tony is actually her real father, and Troy is her uncle! With accidental (and not so accidental) inbreeding so predominant in Heaven’s family, she calls off her marriage to Troy, who commits suicide out of grief, and Heaven’s sad, lamentable story plods along for more twisted relationships with guys who continue to fall for her, despite all the baggage she carries with her.

More twisty and twisted than the first film in the Casteel family series from V.C. Andrews, Dark Angel covers even more ground than before in less than 90 minutes, propelling Heaven from girl to woman in no time at all. Years pass in the story, but star Basso still seems like a teenager by the end. I liked it as far as weird, soapy movies go (and made for the Lifetime Channel, no less), and this is the final “coming of age” entry in the series, because from next entry Fallen Hearts is no longer about a school aged character, but an adult. From director Paul Shapiro.

Heaven is now happily married and ready to settle back in her hometown. But during a visit to Farthinggale Manor, Heaven is persuaded to stay. Lured by Tony Tatterton to live among the wealthy and privileged, Heaven seems to have it all until the ghosts of her past rise up again, threatening her precious new life.

Now a schoolteacher in the hometown where she grew up, Heaven (Annalise Basso) agrees to marry her hometown beau Logan (James Rittinger), but when her not-blood-related sister Fanny (perfectly cast Jessica Clement) seduces Logan and becomes pregnant, Heaven decides to forgive them both and offer full support of Fanny’s baby. Meanwhile, Fanny insists on taking Heaven to court on the issue of custody over a child sibling they both share. It becomes messy when Heaven’s complicated history is unearthed in court, opening up all kinds of festering sores for both Heaven and Fanny, and when that’s finally settled (after Heaven offers a million dollars to Fanny), Heaven’s life becomes even more weird and complicated when her father Tony Tatterton (Jason Priestley) asks her to come live on the swanky Tatterton estate. Against her better judgment, Heaven agrees and rekindles a relationship with her uncle (ew, gross!), whom she thought was dead. She becomes pregnant with his baby and lies to Logan that it’s actually his child. Aside from the fact that Tony, her father, tries to sleep with her in a moment of ill advised drinking and lust, she realizes how entirely screwed her life actually is. She returns home, and with all matters currently settled, the story ends, but sets up the course of the children to be born to Heaven and Fanny.

The third entry in the V.C. Andrews train wreck saga of the Casteel family, Fallen Hearts is far and away the most uncomfortably icky of the initial trilogy. As in the previous two, it deals specifically with incest, but it also reveals how unappealing a character Heaven has become. In the first entry, she was more of a victim, but by now she’s running towards the poor choices she made before like a dog returns to its own vomit. There’s definitely an audience for this soaper, but by now I’ve tuned out because we’re dealing with adults who can’t escape the curses that rule their destinies. This one was directed by Priestley.

Orphaned and crippled, Heaven’s daughter Annie is whisked off to Farthinggale Manor by Tony Tatterton.

After celebrating her birthday, Annie (Lizzie Boys) – daughter of Heaven Tatterton Stonewall – a terrible car accident leaves Annie’s two parents (including Heaven) dead, and her paralyzed from the waist down. To her rescue is the elderly and very wealthy Tony Tatterton (Jason Priestley in old age makeup), who is actually her uncle, but since Heaven never divulged the sordid history of her daughter’s origin, Annie is clueless at first as to who Tony is. Tony whisks her off to the Tatterton mansion where she’s lavished with gifts, but there’s a catch: She’s locked in a room and treated like a prisoner. With no phone or way to get in touch with her half-brother Luke (Keenan Tracey), Annie is subjected to torture by a cruel nurse (played by Daphne Zuniga), and the incestuous tendencies from uncle Tony also come into play when his creepy delusions eventually manifest. Without the use of her legs, Annie must find a way to escape the mansion, learn her true origins, and connect with her brother Luke, whom she is in love with. Hey, it’s based on a V.C. Andrews book – what else did you expect?

A sequel to Fallen Hearts, this fourth Lifetime Channel entry in the Casteel family saga filmed adaptation of the V.C. Andrews books, Gates of Paradise is sort of like Misery, but with themes of incest coursing through its veins. It works as a thriller, but it won’t mean much as a standalone entry; it’s best to watch the other films in the series first. I couldn’t help but slap myself in the forehead when the brother and sister (who discover they’re not actually blood related) decide to marry each other and consummate their relationship. It’s just another brick in the wall for V.C. Andrews fans. This one was directed by Gail Harvey.

Leigh VanVoreen had to escape from Farthinggale Manor and the secrets she harbored. She fell into the arms of Luke Casteel, whose devotion promised her hope.

A prequel to the initial trilogy, Web of Dreams concerns Heaven’s mother Leigh (Jennifer Laporte), who as a teen was ripped away from her father (who’s not actually her father!) by her social climber mother Jillian (Cindy Busby) when wealthy Troy Tatterton (Max Lloyd-Jones) decides to marry Jillian. Troy – who’s much younger than Jillian – preys upon Leigh, and later rapes and impregnates her – forcing her to take action when her own mother refuses to accept the situation. Leigh leaves the estate and while drifting she meets a good-hearted carnival worker named Luke Casteel (Tim Donadt), who takes her in and falls in love with her. They marry and she becomes a part of his family for just a short while until she passes away during childbirth. The curse of the Casteel / Tatterton family becomes intertwined.

The final entry in the V.C. Andrews five-part saga of the Casteel family, Web of Dreams might be the best one simply because it features a central character who doesn’t have time to behave like an idiot. Leigh is a victim here, until she’s rescued, and therefore it’s easy to be on her side. Andrews (as written by Andrew Neiderman) tended to dwell on thoroughly unpleasant stories surrounding characters who were victimized (usually by incest or rape), and so it’s nice to finally have a character who is able to find a happy ending, though it comes so early in her life. If you make it through all five films in this Lifetime series, you might agree that this one is likely going to be the favorite. Directed by Mike Rohl. 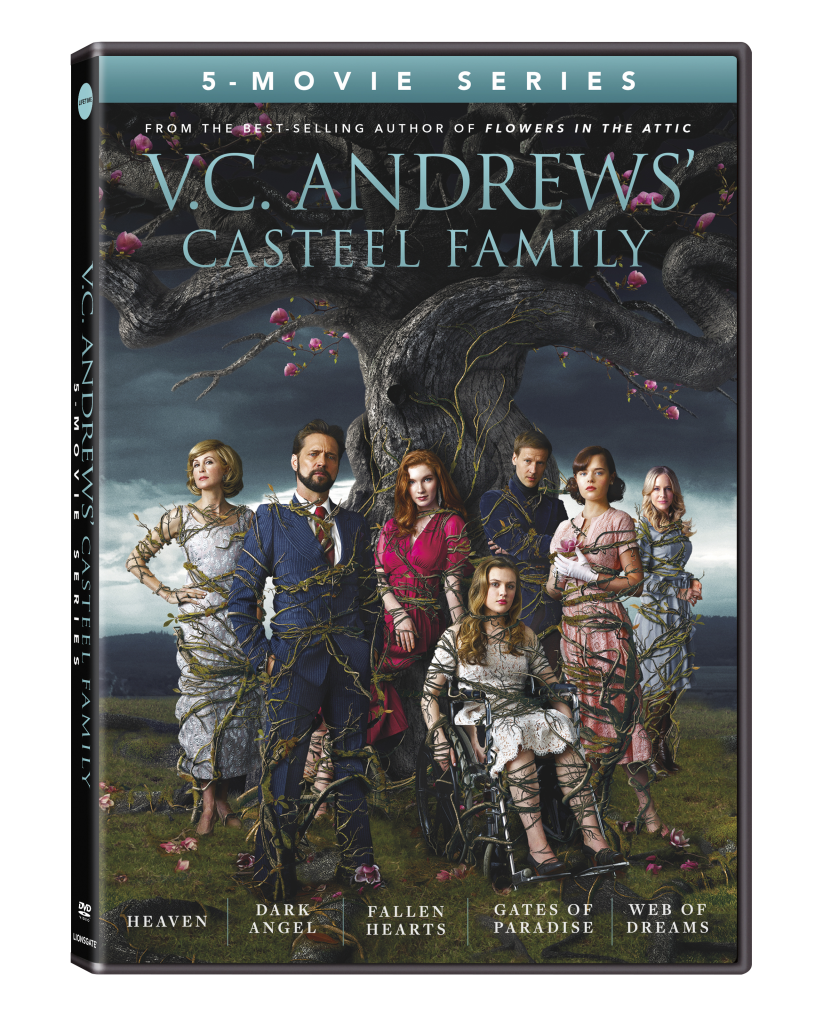