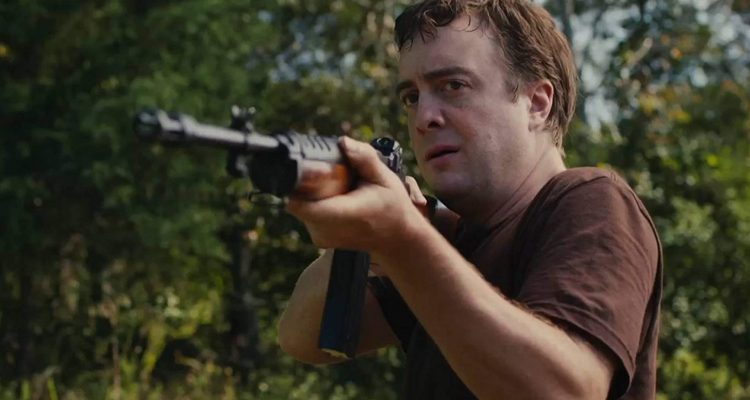 Plot: A mysterious outsider’s quiet life is turned upside down when he returns to his childhood home to carry out an act of vengeance. Proving himself an amateur assassin, he winds up in a brutal fight to protect his estranged family.

I blind bought Blue Ruin on Blu-ray at the weekend as I had heard good things about it for some time. A quote on the back cover said “the violence is unfailingly nasty” so I thought I needed this movie in my life. It was indeed rather violent but being the sick puppy that I am I’ve seen plenty worse so there was nothing particularly disturbing about it. It’s a slowburn movie so it may not be for everyone but it has that underlying feeling of dread so you know it’s not going to end with sunshine and rainbows.

Director Jeremy Saulnier also made the awesome Green Room proving this was not a fluke but he is just incredibly talented. His next movie will star John Boyega and is a Netflix thriller called Rebel Ridge so count me in for that one.

The acting in Blue Ruin is practically flawless with Macon Blair perfectly cast as Dwight; a man torn apart by his wish for revenge against the man he believes killed his parents. His transformation from long hair and beard to clean shaven makes him look like two completely different people. He just seems totally out of his depth throughout and it makes the whole affair seem more real. The violence is sudden and shocking and we actually feel like there are consequences. As Dwight has made the decision to take revenge you are pretty certain early on that he isn’t going to live happily ever after. He is broken and is a man of few words but you still empathise with him due to Blair’s layered performance.

It is filled with suspense from the start and as it isn’t a predictable yarn it keeps you on the edge of your seat until the end credits; it’s the type of movie where you’re relieved it’s over as the tension can get unbearable but it’s a hell of a ride.

Overall, if you haven’t seen Blue Ruin then it’s highly recommended and is a little different from your average revenge tale. The performances and direction are first rate but the slowburn pacing may put some views off.