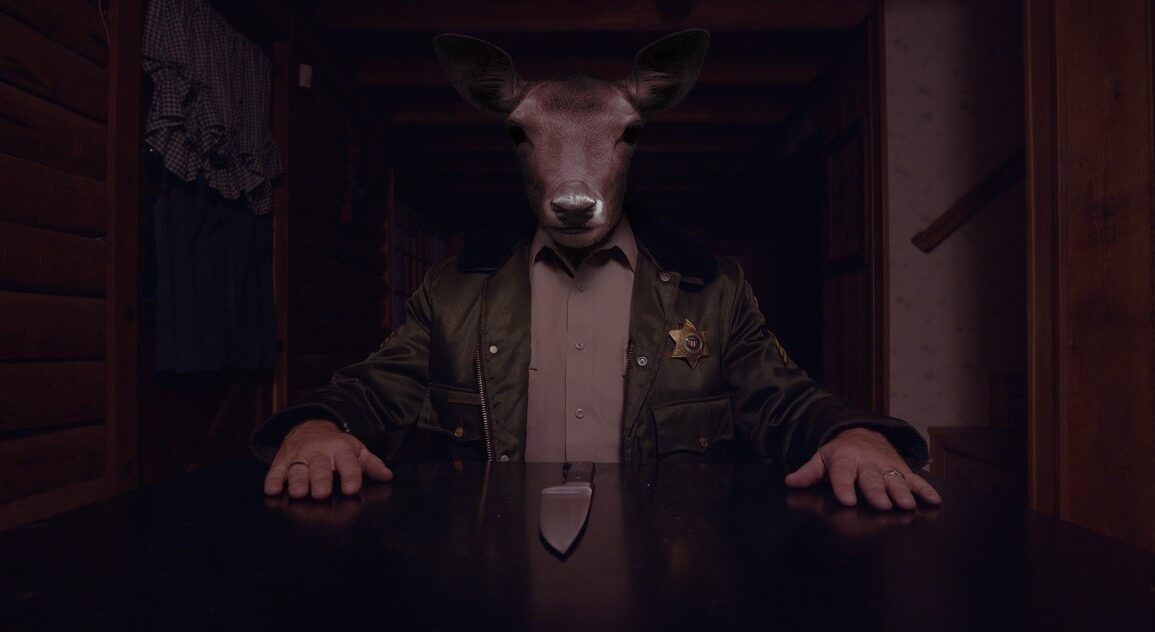 The shocking, violent and gory ending of Dry Blood will either enthrall or alienate the viewer entirely depending on taste, with very little chance of it falling in between.

Plot: In a rural mountain town, an unstable drug addict must unravel a surreal murder mystery as he’s terrorized by malevolent ghosts, a deranged sheriff, and the frightening hallucinations from his withdrawal.

Review: Clint Carney steps into a cabin in the woods inhabited by demons and violence in Dry Blood, a 2017 horror offering from Kelton Jones and Bloody Knuckles Entertainment.  Carney is also the writer in addition to the star of this movie, and while it might sound cliche, it is far more akin to such thrillers as Secret Window and The Shining.  Brian Barnes (Clint Carney) is an addict on the road to recovery, later accompanied at the cabin by companion Anna (Jaymie Valentine).  Before even setting foot inside, Brian is accosted by a local sheriff (director Kelton Jones) who seems to take particular delight in seeing him squirm in public.  Once inside his residence, Brian is subject to visions and demons, personal and otherwise.  Or… was he seeing them even before then?  Is this all a personal reflection of Brian’s addiction?  Why does the sheriff seem to have it in for him on a personal level?  Can Anna be enough help to get him on track?  Can he get things together before his ex-wife and her family arrives?

Have you ever seen one of those closed circuit TV or perhaps dash cam videos that somebody uploads to a shock site, where absolutely nothing happens until the very end, at which time some maniac comes screeching by and all hell breaks loose?  Perhaps a flaming motorcycle wheel comes crashing into a windshield?  Or a CCTV video catches clowns in stuffed animal adorned baseball bats chasing somebody near a gutter for 2 seconds out of 2 hours, and you say to yourself “WHAT THE HELL WAS THAT!?”  Well, Dry Blood is the cinematic equivalent of that.  The pace, made a little more tolerable thanks to the System Syn soundtrack, is such that little to nothing of consequence happens onscreen in an isolated, dark environment for the first two acts, save for quick shots of substances and the occasional crazy appearance by our demonic sheriff, who might come by to throw out some Freudian slip or appear distorted or suddenly possess an animal head over his own.  The rest consists of interaction with Anna, and while there is a seemingly obvious metaphorical meaning to her apparent purity and altogether absent backstory for her character, there isn’t anything to complement the character void.

In fact, we know almost nothing about these characters other than their presence, at least as they appear to Carney’s Brian.  While there is possible reason for this, it potentially betrays the plot rather early.  This leads to another dichotomy, but it is one of general acting and appeal, as Kelton Jones is far and away the most entertaining aspect of the film, while Valentine’s Anna does little more than offer support or establish boundaries… and not very convincingly either way.  Some of the more subversive elements of the film are certainly just that, but a lot of them are thrown at the viewer simply to make them guess, where it makes little difference whether or not close attention is paid to the plot, let alone hear characters’ names, which are not thrown out frequently (if at all, in some cases).  Then, out of nowhere, INSANE VIOLENCE!  The film’s climax feels like a standalone short film: Brian comes to a rather vicious clash with the law and his “softer” side, other characters show up only to be thrown into the violent mix, and there is one rather “cheap” but effective shot at pulling the audience into it all.  The effects are stellar, like a blood soaked grand finale to the eerie early fireworks display of distortions and ghouls seen prior in this metaphorical descent into addiction.

The shocking, violent and gory ending of Dry Blood will either enthrall or alienate the viewer entirely depending on taste, with very little chance of it falling in between. There is some passionate storytelling from Carney and fantastic use of effects from Jones, with subtleties, nuances and metaphor abound, but it will be an acquired taste for an average moviegoer. Does the rug get pulled out from the audience?  Was there ever a rug there in the first place?  And does it fly?  It’s that kind of movie.  It might not be for those faint of heart, but those with a taste for Dry Blood will get more than their fill… if they are patient enough.