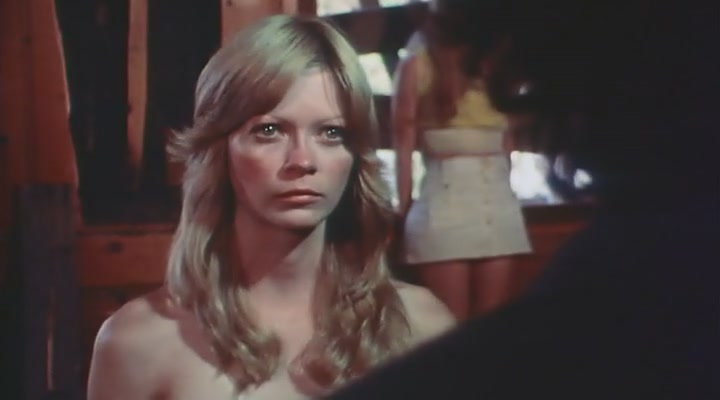 For a drive-in grindhouse film, it hits all the right marks. Vinegar Syndrome’s release will serve as the ultimate edition of this title.

Plot: A teacher and her class of female students take a class trip to the desert. Their bus breaks down, and they find themselves terrorized by a gang of psycho bikers.

Review: There’s something very special about watching a movie made for drive-in theaters right in the comfort of your own home. Trip With the Teacher personifies the grindhouse drive-in movie to a tee: A school field trip for a bus full of nubile young women turns deadly when their bus breaks down in the middle of the desert, and three rough and rowdy bikers stop to “help.” You know exactly what you’re getting in no time at all, and the sleaze factor is amped up for maximum impact. Before their bus breaks down, the girls meet their eventual attackers at a podunk fill up station, and they’re a tease to the bikers: They literally laugh in their faces. Less than an hour later, it’s the bikers (the crazy one of the three is played by wild-eyed Zalman King) who come upon them, stranded and without a prayer. In less than ten minutes flat the girls and their teacher are already enduring assaults, but it gets worse: After towing the bus to a deserted cabin, the bikers get busy with the raping and degradations. One of the three guys has a heart and gets chased off by the other two, but it’s King’s character that is clearly off the rails. How will these women survive the day, and will they get their chance to fight back?

During the DVD revolution, Trip With the Teacher was endlessly featured on multi-pack sets or double feature releases, and it has maintained a reputation for being a strong little rape/revenge movie. It was released by Crown International, and now cult label Vinegar Syndrome has released a fresh 2K restoration transfer on Blu-ray, which will most likely serve as the ultimate edition of the movie. Fans of the drive-in era and of grindhouse films should do well by adding this one to their collections. Supplemental features include a commentary track by three members of the cast “Taking the Trip,” an on-camera interview with one of the actresses in the film, stills, trailers, and more.