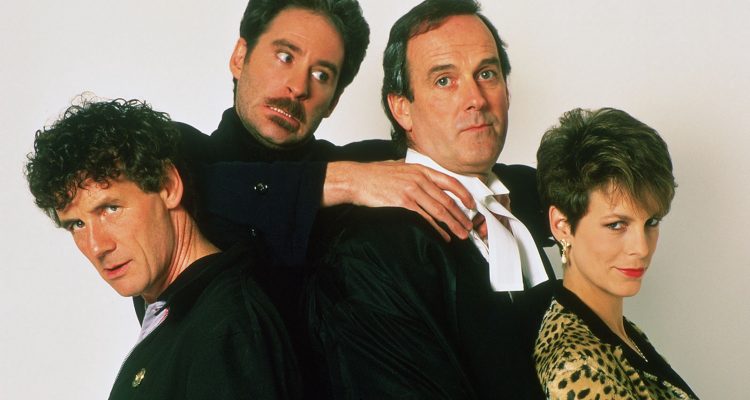 A classic. Arrow’s transfer is exceptional.

Plot: In London, four very different people team up to commit armed robbery, then try to double cross each other for the loot.

Review: A diamond heist in London hits a snag when two of the robbers – sexy Wanda (Jamie Lee Curtis) and her “brother” Otto (Kevin Kline in an Oscar-winning performance) – set George (Tom Georgeson), the ringleader, up to take the fall. But what they weren’t counting on is that George hid the loot before he was arrested, so now Wanda and Otto are frantic to find out where the diamonds are. Wanda sets her sights on George’s barrister Archie Leech (John Cleese, who wrote the script), who might be privy to where the diamonds are, and her seduction of Leech is a catalyst for several hilarious scenes where the poor guy gets humiliated for falling so head over heels in love with her. And there’s a fourth member of the gang as well: Chronic stutterer Ken (Michael Palin), who has an assignment to assassinate the only witness to the crime … a cranky elderly woman with three dogs.

One of the all-time great comedies of the last 30 years, A Fish Called Wanda never gets old. With snappy, sharp comedy and perfect performances, this is a one-of-a-kind classic. Even though the core cast reunited years later for Fierce Creatures, the magic in AFCW can never be duplicated. Directed by Charles Crichton.

Arrow Video’s brand new Blu-ray release of A Fish Called Wanda contains a new 4K restoration produced specifically for this release. Many supplements from previous editions were ported over for this one, such as the commentary by John Cleese, a documentary about the making of the film from 1988, interviews with the cast and crew, and much more. Arrow should be commended for restoring this film, and hopefully it will find a new audience in this day and age.