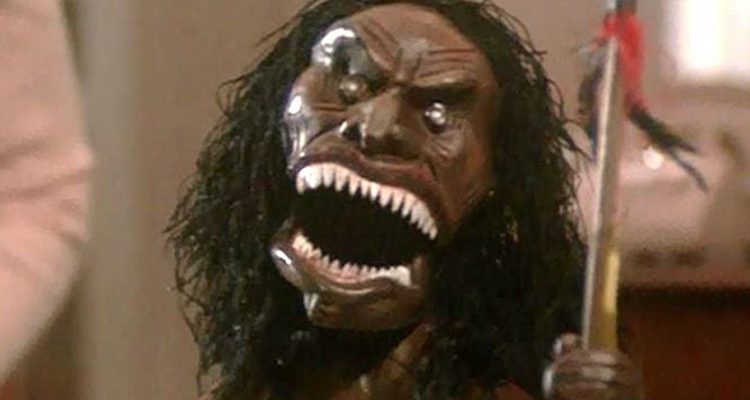 Trilogy of Terror is a wild ride, giving horror fans a little bit of everything, including a powerhouse trifecta of performances by Karen Black.

I have never read the works of Richard Matheson, though I have always been aware of his work (for instance, I like most people are aware that he wrote I Am Legend). He also influenced my favourite writer of all time, Stephen King. I will say that after watching this anthology movie, based on a few of Mr. Matheson’s short stories, I will have to check out more of his stuff. Anyhow, this is an anthology made-for-television movie, comprised of three half-hour stories, all featuring Karen Black (who got typecast in horror-type movies because of her tour-de-force performance in this presentation.

Plot: A teacher is blackmailed by a student into having an illicit affair.

Review: To me, this was the best story of the three. For some reason, I really got into it, and into the teacher’s plight – I sorely wanted to see the student get his comeuppance. I won’t say what happens – if you haven’t seen Trilogy of Terror and don’t want to spend 90 minutes of your life doing so, then at least check this one out. The ending, though, is one of those ones I never saw coming and ended up kicking myself for not seeing this as a possibility.

Black is terrific as the repressed school teacher who is dragged out of her comfort zone and forced to become intimate with a far more aggressive man. Robert Burton (Black’s real-life husband at the time) is suitably sleazy as the obsessive student who has no scruples about taking advantage of his teacher’s reticent nature to get what he wants and ruin her life.

This is a really well-staged, thoughtful story that really draws you in and doesn’t let go.

Review: Unfortunately, for this story, I figured out the twist well in advance, so it felt a little long to get to the ending. It is definitely the weakest of the three stories.

That being said, Karen Black really shone in this role. The differences between the two characters are night and day, and Black really made those differences pronounced. Besides the noticeable wardrobe and make-up changes, the body language and the energy that she brought to the roles really made you believe that they were inhabited by two different actresses. It’s a testament to her acting talent that she was able to pull something so difficult off that flawlessly.

As an interesting side note, it was interesting to see George Gaynes, he of Police Academy fame, in a serious role as the twins’ doctor. I’ve only seen him really in comedy roles where he played a clueless goof, but it was evident from this role that he had the acting chops to take on a variety of characters.

Review: Probably the most famous of the three stories in the movie, this one also feels like the most conventional horror story. While you could argue that the first two stories were really thrillers, this one is flat-out slasher horror and, in that sense, feels a little more out of place with the other previous entries in the film.

That being said, it’s a bloody good time. Karen Black is at her best in what is basically a one-woman play. Having nothing to play off other than a doll, she gives it all her worth and, despite the ridiculousness of the situation, really tries to bring a real horror to the proceedings that really could have just deteriorated into farce.

The doll itself had a neat design and was as suitably scary as you could probably make a doll be. That being said, it is still ridiculous, as the idea of a doll chasing me around with tiny sharp teeth and a tiny knife doesn’t really scare me – I kept waiting for Karen to just punt him out a window or something. This being the 70s, the effects were unconvincing as well, though I get the sense they tried the best they could. The only reason this story really works is based on the power of Karen Black’s performance.

Trilogy of Terror, while pushing twist endings a little too far in the first two stories, is a devilishly good time. Karen Black is a significant reason for the success of the movie, along with the strong source material that elevates it above the rest. Check this one out if you have the time, I don’t think you’ll be disappointed.