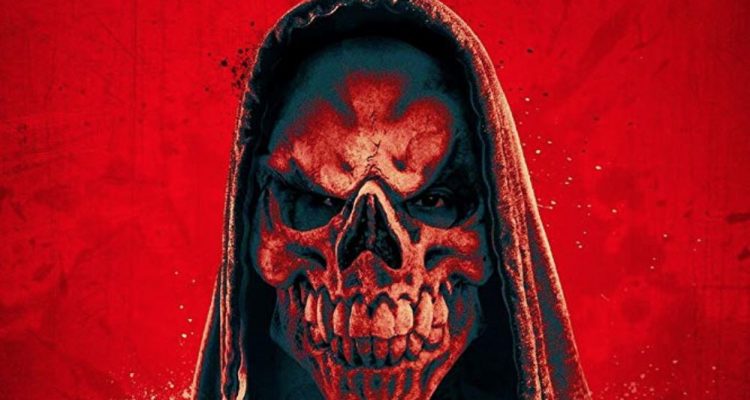 TRICK is a violent, dopey love letter to the Halloween season. The film’s logical shortcomings are easily overshadowed by its energetic direction, nice cinematography, and outlandish on-screen mayhem – making it an entertaining new entry in the “slasher” horror subgenre.

Plot: A no-nonsense detective tries to track down a serial killer, who is terrorizing a small town.

“Blood and guts from dust till dawn!”

That declaration is made by a character heading to a Halloween party in TRICK, the new film from director Patrick Lussier and writer Todd Farmer. In their two previous collaborations, MY BLOOD VALENTINE 3D and DRIVE ANGRY, the pair have shown a commitment to onscreen mayhem that continues here in their attempt to create a new, mythic on-screen slasher character, in the vein of HALLOWEEN’s “Michael Myers” or SCREAM’S “Ghostface”, with the film’s titular villain “Trick”. That bit of dialogue I quoted in the beginning sums up the filmmakers’ style and the end product so well, it could have been a statement of intent printed on the first page of the film’s screenplay.

TRICK tells the story of a small community that is terrorized by yearly visits from a masked, knife-wielding murderer that the locals have dubbed “Trick”. The thing is though, “Trick” should be dead after his first rampage was thwarted and he was revealed to be high school loner Patrick Weaver, played by Thom Niemann (HBO’s THE DUECE). Weaver was stabbed, shot, and fell from a high window yet his body was never recovered by the authorities. Soon after those events, killings begin to take place around Halloween that fit Weaver’s modus operandi and the man who brought him down, Det. Mike Denver played by Omar Epps (TV’s HOUSE M.D.), is convinced that somehow “Trick” is still alive and must be stopped before the bloody rampage continues.

TRICK is concerned with one thing as a film, giving fans of slasher films what they want – gruesome, implausible death scenes filled with practical special effects meant to be seen by a raucous movie theater audience. It’s not concerned with logic – large parts of the film and its central mystery of whether or not the killings are supernatural in nature just don’t make a lot of sense. When the eventual third act reveals happen, the film tries to lay the story out, but it doesn’t go the obvious route and fill in the gaps of logic. Instead it chooses to ratchet up the implausibility to nearly delirious levels that will have the people willing to go along with the film smiling from ear to ear while the lunacy on display washes over them. Everyone else though will likely be staring at the screen bewildered by the events on screen.

The film is helped in its efforts to sell its outlandishness though by its very game cast. Everyone plays the film straight to keep the film grounded and prevent TRICK from becoming the farce it could very easily slip into. A few of the standouts among the cast, include Ellen Adair (Showtime’s HOMELAND) and Jaime Kennedy (the SCREAM franchise). Special mention should be made of legendary genre actor Tom Atkins (HALLOWEEN III: SEASON OF THE WITCH) as well. He plays a horror film-loving local business owner and is clearly having a ball getting to be a heroic figure in a horror film again. There is a moment late in the film that will have old school horror fans clapping with delight where, in a shout out to his iconic role in NIGHT OF THE CREEPS, Atkins gruffly declares that he is going to get his shotgun to help take care of business. Clearly, the filmmakers know their audience for this one.

Knowing the audience well also means that the filmmaking duo have wisely draped TRICK in the iconography of Halloween. Jack-o-lanterns, trick or treaters, and other elements of the spooky holiday are never absent from the film for more than a few minutes at a time and it’s all gorgeously photographed by cinematographer Amanda Treyz (CHROMESKULL). I can see TRICK becoming a staple of audience’s Halloween movie marathons in the years to come. It’s love for the holiday is apparent in nearly every frame.

Speaking of the impact TRICK will have on fans of the horror genre, I fully expect to see people dressed as the titular slasher by next year’s Halloween. The character has more than one look in the film but all of them are striking enough, from various rubber creature masks to a more tactical hooded jacket and grease paint look, to inspire cosplayers to start working on their own versions of “Trick” … and on their knife-twirling skills.

Yes, I said “knife-twirling”. There is A LOT of knife-twirling in TRICK. The film presents a killer that relies more on speed and technique than lumbering chases and blunt force trauma. The acrobatic style in which “Trick” slashes through his victims surprisingly owes more to “John Wick” than genre staples like “Jason Vorhees”. The killer’s gracefulness is in stark contrast to the savagery on display when he happens upon a victim though. The scenes of violence, in the film, occur rapidly and with a real surprising sense of cruelty. There is enough fake blood sprayed in TRICK to please even the most diehard movie gore hounds.

Like I quoted earlier in this review, “Blood and guts from dust till dawn!”. That’s the mantra. Logic be damned. TRICK just wants to entertain and give it’s intended audience a good, gore-soaked time and at that it succeeds.