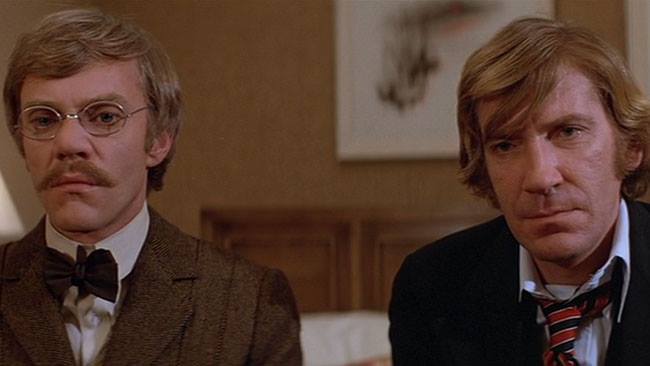 It has a clever script and appealing leads but doesn’t look as good as it maybe should and the Jack the Ripper elements are tame.

Plot: H.G. Wells pursues Jack the Ripper to the 20th Century when the serial murderer uses the future writer’s time machine to escape his time period.

Review: What if author H.G. Wells actually invented the time machine he wrote about in his fiction? And what if he chased Jack the Ripper through time to 1979 to fix a mistake he made? These are the questions that the film Time After Time presents in an entertaining sequence of events that has H.G. (Malcolm McDowell) creating the infernal time machine, and mistakenly allows Jack the Ripper (David Warner) to use it to escape authorities in Victorian London, only to land in San Francisco 100 years later. Thinking the future will be a “utopia,” H.G. is shocked to find that the future is an even scarier place than the past, with rampant crimes, wars, and ill morals cluttering up the annals of history. Jack the Ripper continues his killing spree in San Francisco, and only H.G – with his fish out of water mentality and crazy story of time travel placing him in harm’s way from police who don’t believe his silly story – has a prayer of fixing his mistake. With the help of a bank teller (Mary Steenburgen) – who becomes his only ally – H.G. must trap Jack and correct history (and the future) so that Jack’s reign of terror ends once and for all.

Time travel is a tricky subject, but the clever script by Nicholas Meyer (who also directed) and appealing leads help elevate Time After Time to a popcorn level. It feels very much in tune to the cinematic works that were adapted from Wells’ Time Machine story, so it’s both homage and a close kin to those. The Jack the Ripper elements are tame to accommodate a PG rating, but Warner plays him with enough sinister flare that the film still feels like it could be a horror film. Think of this as the original Last Action Hero with H.G. Wells as the Jack Slater character and Warner playing the Benedict character (played by Charles Dance). It’s virtually the same story.

Warner Archives has just released a Blu-ray of Time After Time as part of their Warner Archive series. It doesn’t look as crisp and clear as I thought it should but it still looks better on a widescreen TV than the previous DVD release. It’s affordably priced, so if you’re a fan or just curious, then grab a copy.