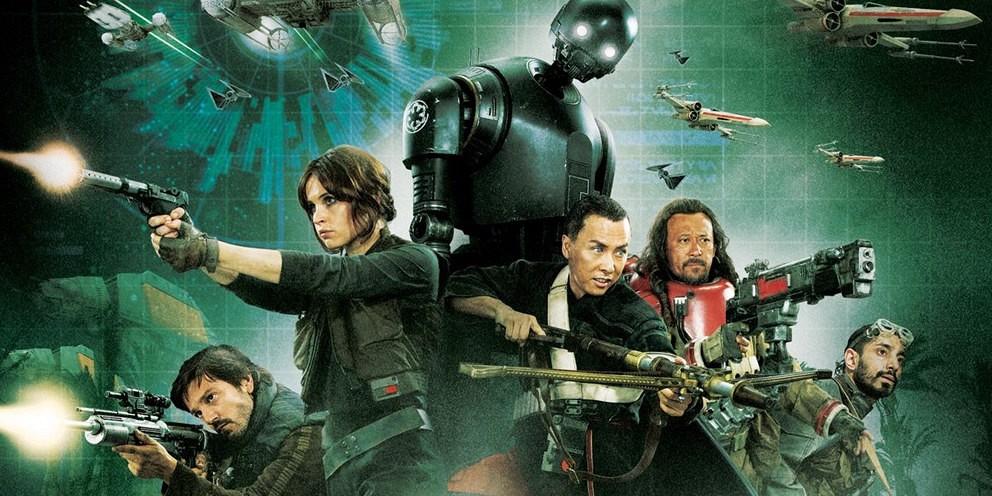 Rogue One is a great start to the Star Wars solo movies and hopefully they remain at this high quality. It’s not without its flaws but the Vader scene at the end is sure to become the stuff of legend.

Plot: In a time of conflict, a group of unlikely heroes band together on a mission to steal the plans to the Death Star, the Empire’s ultimate weapon of destruction. This key event in the Star Wars timeline brings together ordinary people who choose to do extraordinary things, and in doing so, become part of something greater than themselves.

Review: It’s no secret that I’m a die-hard Star Wars nerd; I grew up with it and it was part of my childhood (alongside Rambo and John McClane of course). When I first heard about Star Wars spin-offs I thought it sounded like a typical Hollywood cash grab and approached with trepidation. When I heard Donnie Yen was involved I perked up as he is my favourite action star.

Early trailers for this movie had impressive visuals with Donnie stealing every scene… and yet I could never get particularly excited about it. Jyn Erso (Felicity Jones) looked like she was going to be bit of a pain in the ass but I’m pleased to say that the final movie turned out far better than I could possibly have imagined.

This was quite a different film from what I expected and all the better for it; it’s far superior to The Force Awakens which as we all know was just a remake of A New Hope. Rogue One had surprising amounts of heart and I was 100% behind Jyn as she began her quest with the rebels. Speaking of the rebels; this movie takes them in a direction we haven’t seen in Star Wars before where they aren’t all idealistic heroes but are willing to kill, spy and betray people for the “greater good”.

Donnie of course gets to kick some ass which is what we all want to see but he also has one of the finest moments in the series when he takes down a Tie-Fighter in spectacular fashion; his character was also far more interesting that I first thought. From the trailers it looked like he was going to be this quiet Jedi type who was very serious but he smiled a lot and was really the soul of the ragtag team of heroes. But like C-3P0 and R2 he’s not complete without his counterpart Baze Malbus (Wen Jiang) who always has his back. Malbus is a total warrior hero with awesome hair and he is a genuine force for good (pardon the pun).

K-2SO was hyped up a lot before the movie so we kind of knew what to expect but Alan Tudyk totally nailed it and provided some much needed levity in between the desperation of this potentially hopeless journey.

I also really liked Cassian Andor (Diego Luna) whose motives you aren’t quite sure about which keeps you guessing; is he a good guy or not? You’ll just have to see the movie and find out.

Mads Mikkelson is always great no matter what he does but I especially loved his character in this because for once he isn’t a scene stealing villain but a man doing what he has to in order to protect what’s left of his family.

Orson Krennic (Ben Mendelsohn) is an enjoyable big bad but he is slightly overshadowed by a certain Dark Lord of the Sith. For the record this movie is the best Darth Vader has ever been. EVER. I’ll just leave it at that.

*Minor spoiler alert* I never thought I would see Grand Moff Tarkin again and it was most impressive to watch him interact with Krennic. He was brought to life with CG/motion capture which was very well done but not quite perfect; the eyes still look dead but it kept me engaged and frankly I was too busy being a fanboy to be particularly bothered.

Rogue One has arguably the best action scenes of the series with the final battle wonderfully chaotic with stunning visuals and felt like the Star Wars movie we’ve all been waiting for. Seeing Imperial Walkers again made me feel 12 years old and filled me with more nostalgia than any scene in TFA.

Michael Giachhino’s score was quite different sounding from what we’re used to from John Williams but it used some familiar themes including the Imperial March which still sends shivers up the spine.

There are a few nice cameos which I didn’t know about but I will say that movie did lack some surprises in terms of story; maybe they released a few too many TV spots as I felt like I had seen a lot of footage already.

I think the ending came along a bit too suddenly too and felt a little rushed so they maybe could have slowed the frenetic pacing down a little to let some of it sink in.

Overall, minor nit-picking aside Rogue One is indeed the best Star Wars movie since The Empire Strikes Back and will warrant multiple viewings in order to take in all the references and Easter Eggs. Donnie Yen gets to beat up Storm Troopers and Darth Vader gets his all-time greatest scene, so you’d be best to see it ASAP before it’s spoiled by someone like me..