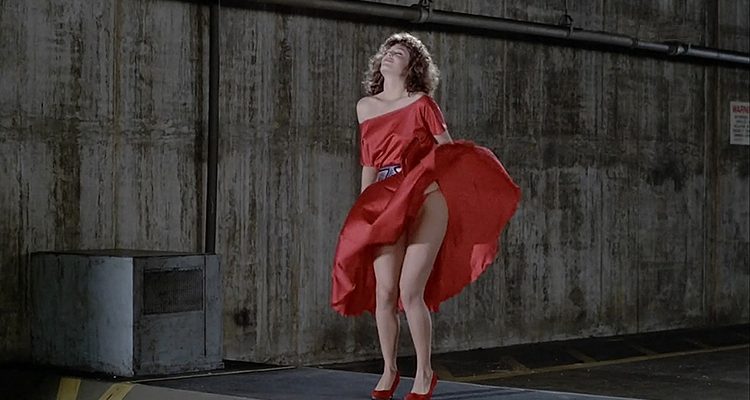 Gene Wilder is great in it. It’s hilarious and sexy. Kelly LeBrock is stunning in it. Kino’s Blu-ray is sweet.

Plot: On his way to work, Teddy spots Charlotte – an incredibly beautiful Woman in Red. He really wants to meet her – but what would his wife say?

Review: Complacent ad man Teddy Pierce (Gene Wilder) is virtually struck by lightning when he sees The Woman in Red (stunning Kelly LeBrock) walk into his office building. Gathering up the nerve, he calls the phone near where she’s sitting, hoping that she’ll pick it up, but in a comedy of errors, his nebbish co-worker (Gilda Radner) picks up the phone instead … and agrees to go on a date with him, knowing full well who is asking her out. Happily married Teddy then embarks on a clumsy, perilous quest to go out with the supermodel Charlotte (LeBrock), while the rest of his life teeters on the brink of disaster as he continuously screws things up. His pals (played by Charles Grodin, Joseph Bologna, and Kyle T. Heffner) cheer him on as he makes his move, and we watch as his perpetually makes a likable fool of himself trying to impress her. Can Teddy possibly carry on an affair with the woman of his dreams, and if he could, would it be worth it?

It’s almost impossible not to have a soft spot for Gene Wilder, and even though he plays an unrepentant philanderer, his sweet tooth for comedy and hilarity wins the day. Wilder also wrote and directed the film, so it’s an interesting little look into his mind, and it’s strange to think he cast his then-girlfriend Radner in such a dumpy light. Songs by Stevie Wonder are all over the soundtrack, and LeBrock is a wonder to behold in her first screen appearance. Supporting cast mates (especially Grodin) are given ample opportunity to shine.

Kino Lorber will be releasing The Woman in Red onto Blu-ray later this month. It’s a lovely upgrade from the previous DVD from MGM, and the picture quality and sound are sharper than ever. Special features include an audio commentary by film historian Jim Hemphill, and the original theatrical trailer.