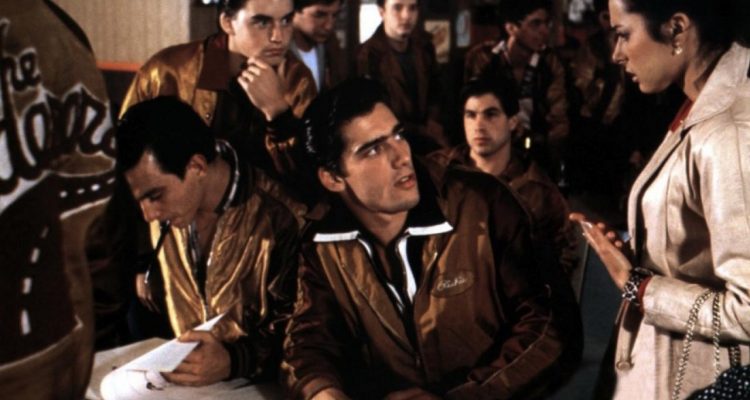 A classic movie with a great score, memorable characters and the Blu-ray has plenty of special features.

Plot: Set against the urban jungle of 1963 New York’s gangland subculture, this coming of age teenage movie is set around the Italian gang the Wanderers.

Review: The Italian kids in the Bronx have formed a gang that calls themselves The Wanderers. It’s 1963, and every creed and color has a gang. The Chinese gang is The Wongs. The skinheads are The Baldies. The blacks are the Del Bombers. The gang no one messes with is the no-rules clan called The Ducky Boys. The one thing all of the other gangs agree on is not to mess with The Ducky Boys. The story focuses closely on a couple of the The Wanderers, who are still in high school. The leader is good looking, self-assured Richie (Ken Wahl), and his second is Joey (John Friedrich), who is living in a precarious home situation with an abusive father. The new recruit is a tough, but likable outsider named Perry (Tony Ganios), and with him in the gang they’ve got a slight advantage over the other gangs. But when a bizarre encounter with the Ducky Boys gets Perry a broken arm, the odds are about even again. With a big football match between The Wanderers and the Del Bombers coming up, all the gangs convene to watch … except the Ducky Boys have something sinister planned, and because of it there will be an all-out war.

With some radical ingredients that include coming of age drama, comedy, nostalgic reminiscing, and unpredictable nightmarish interludes, Philip Kaufman’s genuine cult classic The Wanderers is a very special movie. On the one hand, it’s exactly what you’d expect from it with precious moments and a radio hit friendly soundtrack, but on the other it’s a complete mystery with its intense, nightmarish violence and a vivid document of the passing of time and the diversity of the era. It shows a real melting pot of cultures and attitudes, but it also shows (in a highly stylized way) the pits of hell that existed on the fringe of the Bronx, oozing from out of the shadows. It’s a really fun and fresh (to this day) coming of age movie, and by the time it ends, you know exactly who these characters are and where they’re headed in life. Karen Allen co-stars as a cute and plucky love interest for Wahl. Based on a book by Richard Price.

Kino Lorber has just put out a fully loaded two-disc Blu-ray set of The Wanderers with two versions of the film. In addition to the theatrical cut, there’s a slightly longer “Preview Cut” and tons of bonus features, including two audio commentaries, a number of on-camera interviews with cast and crew, and more, including featurettes and trailers. It’s the ultimate edition fans of The Wanderers deserve, and the movie looks great in 2K.