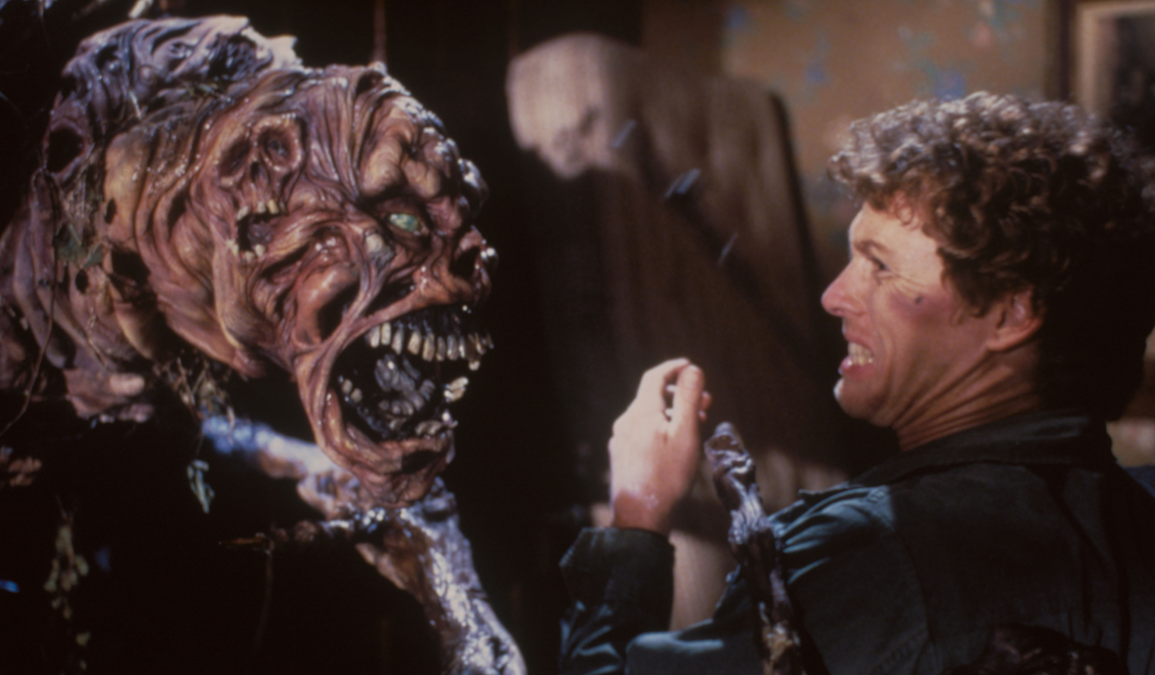 House isn’t remotely scary but it’s a lot of fun with plenty of laughs and it’s a great looking Blu-ray with tons of content.

Plot: A troubled writer moves into a haunted house after inheriting it from his aunt.

Review: An old lady is found hanging in her big, spacious house. Her next of kin is a troubled famous writer named Roger Cobb (played by William Katt), who writes horror novels. He’s recently divorced after an unfortunate incident where their little boy disappeared one day at the big old house. As a sabbatical, Cobb goes to live at the house to write his new book about his experiences while in the Vietnam War, and almost immediately strange and horrifying things start happening. He sees monsters. He has PTSD (before there was such a term) flashbacks, and his neighbor (played by George Wendt) thinks he’s out of his mind. It soon becomes apparent that there is a gateway to a darker dimension somewhere within the house, and that Cobb’s son has been imprisoned, waiting for someone to save him …

What a goofy, out-of-nowhere horror movie House is! The tone is comedic, but the themes are deadly serious, and it’s an intriguing balance in how director Steve Miner (Friday the 13th Part 3D), screenwriters Fred Dekker and Ethan Wiley, and producer Sean S. Cunningham are all able to manage what could have been a train wreck. The horror elements take front and center with fun looking creature effects (using traditional make-up, costumes, and puppetry) all over the place, and while I’ve never considered House to be “scary,” it’s perfectly palatable, especially for fans of EC comics like Tales From the Crypt or Creepy. The movie has aged well, as evidenced with the brand new Arrow Video 2K restoration, and along with crisp images (it was photographed by Mac Ahlberg), it was nicely scored by Harry Manfredini. This is fine horror film, and it looks and sounds great on the new Blu-ray.

Arrow’s Blu-ray has tons of bonus content, including a long “making of” feature (it’s over an hour long) with lots of fun on-camera interviews, and lots of vintage supplemental features. There’s a new piece of artwork on the cover by Justin Osbourne, but the original is on the flipside of the sleeve just in case you prefer the original. The limited edition release comes in a box labeled “Two Stories,” which also contains House II: The Second Story.