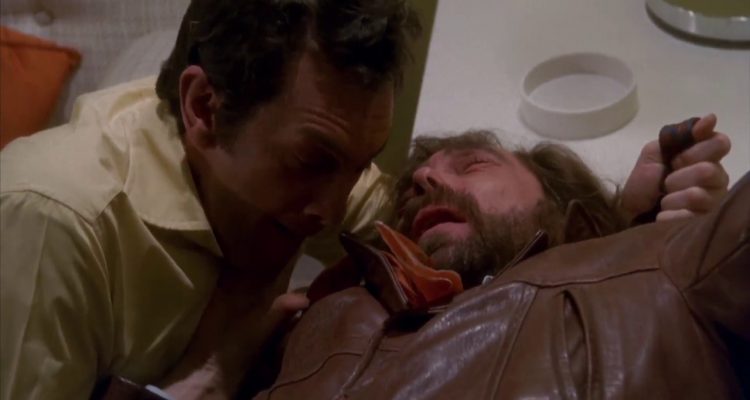 Much like it’s companion, Tales from the Crypt, this is a fun movie with some decent performances and genuine thrills.

Plot: 5 men are trapped in an office building’s sub-basement and tell one another disturbing dreams they have had.

Review: The easiest way to review this movie is to say, if you like Tales from the Crypt, you’ll like this movie because it’s basically the same premise: the stories of five people who don’t know each other are told, with a fundamental immorality being on display for each of them. I will say that unlike Tales, all five characters in this movie did terrible things, though there are different degrees of justification.

The five stories also have different degrees of engagement – I didn’t care much for the first and fourth stories, though the other three were pretty good, with the last one being the best. Some of that has to be attributed to Tom Baker, who, besides having an incredible speaking voice, seemed to come from the school of Peter Cushing acting, in the sense that he took his role the most seriously. It was also interesting for Terry-Thomas, who I’ve only seen to this point in comedic roles, taken on a more serious one, where he was a douche to boot. Curt Jurgens also did a bang-up job and was a fitting end narrator to the movie.

On the visual effects front, it was hit-or-miss. The fangs of the vampires in the first film were utterly unconvincing (they looked like the sort of teeth you can buy at the Dollar Store around Halloween for a buck), as was the “blood” that the main character drank (though I did think his end was really amusing). The rest of the visual effects were alright and, at least, didn’t look as fake as the first story. I found the soundtrack to this film really memorable and engaging and perfect for the screen’s subject matter.

So, again, much like Tales from the Crypt, I recommend it for EC comics fans and for folks who like a little cheese with their horror. In fact, if you watched both movies on a Halloween night, preferably in the dark and late at night, you’d probably have a grand old time.