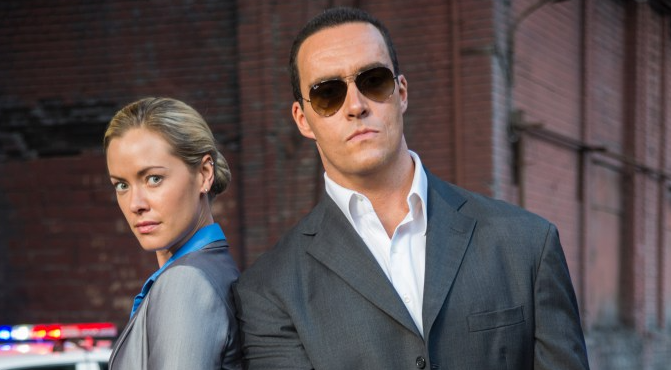 International star Alexander Nevsky is back at it again! Nevsky brings his brand of action once again the action-thriller, Black Rose, a police drama that brings in an element of Criminal Minds. Nevsky is an amateur boxer and bodybuilder who has won Mr. Universe 3 times, and has produced seven international hits including, Moscow Heat, Treasure Raiders, Magic Man, Showdown in Manila, and others! Black Rose is his directorial debut and it has gained huge success in Russia and was released in the States on May 2. Nevsky took a moment to do an interview with myself recently and had some interesting things to say.

Alexander, thanks for joining me today. It’s a pleasure to talk with you.

Hi Ethan! Pleasure is all mine. I like Movie Elite, you and your team are doing a great job!

The plot to this latest film Black Rose is unique to most crime stories. Where did the idea of leaving a black rose at a crime scene come from? Did you or somebody come across a real-life case where that was done?

It was my idea so thank you for the compliment! I’m a big fan of Sir Arthur Conan Doyle and his classic books about Sherlock Holmes. I mixed action and suspense in my directorial debut and wanted the Black Rose killer to be different and mysterious. That’s why he always left flower and note in Russian on every victim’s body. I created an original story for Black Rose and the script was written by the very good writers Brent Huff and George Saunders. I think Brent studied some real-life cases while he was working on the screenplay.

As a producer, what do you look at for a story? What’s that thing you look for that makes a great story?

I personally like ‘old school’ action movies and always look for a great story for that kind of film. What makes a great story? It should be not just interesting but different and edgy. When did you see good Russian character in Hollywood film last time? Black Rose is the story about Russians and Americans working together and respecting each other, which is different. And, as I mentioned already, it has several genres mixed all together (action, suspense, horror and even a little comedy moments) which is edgy in my opinion.

What about as an actor? What makes you jump at a role?

I was a skinny Moscow kid and I started boxing because of the Rocky movies. Later I switched into bodybuilding because of Arnold in Conan The Destroyer and it changed my life completely. So I like to play those types of characters I saw in classic action films of the 80s and 90s. I did it many times already and it’s always fun! On the other hand, it was great to work with director Sofia Coppola on “Somewhere” which wasn’t an action film at all. I liked her movie “Lost in translation” a lot and of course I’m a fan of her father.

You were born in Russia but learned English later. Talk a little bit about the challenges of shooting a film in English. This film in particular has a “fish out of water” element that makes it interesting.

Don’t forget that I produced Black Rose, directed it and as an actor was in almost every scene (except the beginning). We shot the film in English with a mostly Hollywood cast and crew and it was tough for me all the way for many reasons. But English wasn’t one of them. I’m pretty comfortable with this language now. The real problem was my involvement in almost every aspect of preproduction and casting, actual shooting and postproduction, theatrical release in Russia and worldwide sells at international film markets and so forth. I didn’t have free time for almost a year! But don’t get me wrong: it was all a dream come true and I enjoyed it a lot. Regarding “fish out of water”: it was easy for me to play because I remembered myself 15 years ago, when I just moved to LA. I didn’t know anyone and didn’t speak English at all. So yes, it was very interesting!

Were you able to get actual police or experts in law enforcement/serial killers to help with getting facts right?

I had consultants from the Moscow Police Department when I was shooting in Russia. They didn’t like just one thing: that a police officer went to the other country wearing official uniform (but it looked cool so I did it anyway). Screenwriters used some advices from LAPD detectives for first drafts of the Black Rose script.

Did you get to film in Russia at the beginning of the film or was that done separately elsewhere?

We really shot it in the center of Moscow! Good thing is – I’m an established movie star in Russia and can do a lot of things over there. We were shooting those big opening action scenes for almost a week, using many actors and extras, with a lot of guns firing and blowing up cars. I should thank my Director of photography Rudy Harbon; he did a great job in Moscow and in LA (my favorite scene over there was shot in Malibu, by the Ocean). I also should thank editor Stephen Adrianson, composer Sean Murray, executive producers Bryan Gores and legendary Sheldon Lettich (he made Double Impact and Hard Corps with JCVD). And all my costars supported me a lot – Adrian Paul, Robert Davi, Matthias Hues, Robert Madrid and amazing Kristanna Loken especially.

Who do you hope is going to love this movie?

Black Rose was a theatrical hit in Russia/CIS and the film’s rights sold to 22 countries already. It was released in North America this month in limited theaters, on DVD/VOD and on all the digital platforms. I hope people like my directorial debut. I made it as a kind of tribute to classic ‘old school’ action thrillers of 80s and I’m sure that there is still a big audience for the movies like this.

What do you want people to take away from this project?

As I said, I hope people will be entertained by Black Rose. But my film is also about the friendship between Russians and Americans. I think it’s an important message, especially right now, because we don’t need another ‘Cold War’ between our countries!

Once you’re finished with Black Rose, what’s next on your schedule?

My next action film Showdown in Manila will be released in the US this fall. I produced it and starred in it with many great action stars: Casper Van Dien, Cary-Hiroyuki Tagawa, Matthias Hues, Tia Carrere, Olivier Gruner, Don “The Dragon” Wilson, Cynthia Rothrock and Mark Dacascos (he also directed). My other new movie Maximum Impact is in the final stage of post-production. It was directed by the great Andrzej Bartkowiak (DOOM) and was written by Ross LaManna (Rush Hour). Maximum Impact will be out in 2018.

Alexander, thanks for answering my questions. Hope everything goes well for you in the future.

Thank you very much for all your interest and support!

Black Rose is currently on Redbox and is available for rental on most streaming outlets. Here’s the trailer: