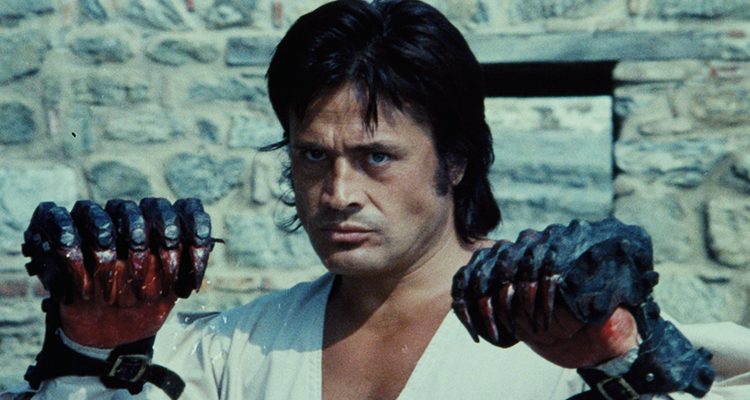 If you’re into gonzo, bonkers epic sword and sorcery movies from Turkey, here’s your holy grail!

Plot: When the king is murdered, his baby son and heir is hidden in the forest where he is abducted and raised by a pride of lions. As an adult he uses his beastly strength and claw-like hands to take revenge against the new king and his armies.

Review: Many years ago when mom and pop video stores were virtually everywhere, I picked up a videotape called Lionman II, and set it on my sword and sorcery shelf. I’d never heard of the first Lionman, and though I searched hard for the original film, I began to assume that the distributor released it with the “Part II” to hoodwink people into thinking it was a sequel to a more successful film that actually didn’t exist. Until last night, I thought that was the case.

I put on the just released deluxe blu ray edition of a Turkish sword and sorcery extravaganza The Sword and the Claw and sat and experienced a humdinger of a movie, but the biggest caveat for me while watching it was that the hero was consistently referred to as Lionman, as he was a Tarzan / Beastmaster / Conan-esque hero raised by lions. Finally, it dawned on me that Lionman II is the sequel to this movie! The skies parted and delivered to me the original film that I was certain didn’t actually exist. Boy, was I wrong!

The Sword and the Claw is a gonzo epic with clashing swords, dynasties, and uphill dialogue delivery, all done in high operatic fashion. There’s a villain who tries to end an empire, but misses the birth of the prophesied warrior who is eventually reared by a pride of lions, and later on becomes a wandering hero who is destined to bring about the ruination of the evil empire that killed his family. He’s virtually indestructible too: He falls from great heights, he gets stabbed, his hands become transformed into giant claw-like mitts, and he swings around the balustrades of a castle, while throwing knives that hit every mark! The hero is played by the incredible prolific Cüneyt Arkin, a Turkish superstar with over 300 film credits (a quick search on him shows that he always played the hero in his career and that he did all of his own stunts, resulting in the breaking of almost every bone in his body throughout his career). Arkin’s acting prowess is limited to basically a few simple maneuvers (both in his acting and in his physicality), but he clearly loved being the hero in The Sword and the Claw.

My expertise in Turkish cinema is admittedly miniscule, but this is a great place to begin your education. Now I can finally watch my VHS of Lionman II, which has been patiently waiting for the day for me to pop it into the VCR. Ah, thank you, AGFA, for releasing this film on Blu-ray to get me started.