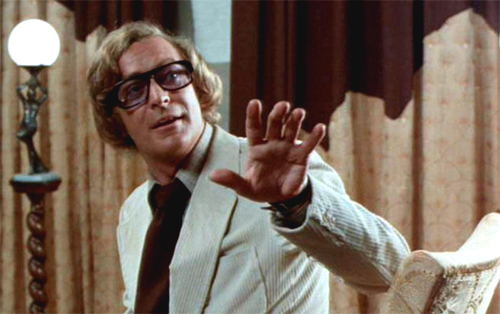 Plot: A seedy writer of sleazy pulp novels is recruited by a quirky, reclusive ex-actor to help him write his biography at his house in Malta.

Review: Mickey King (Michael Caine) is a pulp mystery / adventure novelist, who is given the unexpected opportunity to ghost write an autobiography for a reclusive former actor with mobster connections. He’s taken to a private island somewhere in the Mediterranean to meet the actor, who turns out to be a crass, thoroughly unlikable peach of a human being, played by Mickey Rooney. But as King tires to get some information from his new employer, he uncovers a mystery surrounding a local unsolved murder that is quite possibly connected to the man who he is supposed to be writing about. And suddenly, King becomes a target for assassination by unseen killers that have been following him for days …

A European travelogue with a decidedly droll sense of humor, Pulp has some strengths going for it, such as Caine’s usually deadpan style of acting, a cool score by George Martin, and an off-kilter directing style by Mike Hodges, who’d previously directed Caine in Get Carter. While Pulp is more talk than action (with lots of voice over narration by Caine’s character, emulating his alter ego literary hero creations), it is an unusual little thriller with a perplexing, anti-climatic ending that goes even into the end credits.