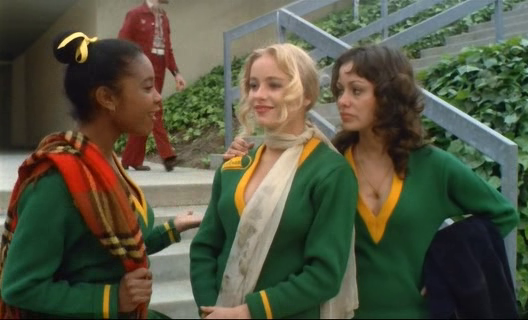 The film is a blast and it’s been nicely restored for this Blu-ray.

Plot: In order to write an expose on how cheerleading demeans women, a reporter for a college newspaper infiltrates the cheerleading squad.

Review: Jack Hill’s seminal grindhouse exposé dramedy The Swinging Cheerleaders stars Jo Johnston as ambitious journalist Kate, who goes undercover at a local university to help spotlight female exploitation by posing as a cheerleader on the pep squad. She causes a stir in her cheer squad when football hunk/star Buck (Ron Hajak) pursues her with unbridled abandon, upsetting the balance of the hierarchy on her team, particularly with Buck’s girlfriend Mary Ann (Colleen Camp). Meanwhile, Kate comes to understand that because the football team is doing so well, the coach and the dean of the school (and even one of the math teachers) have begun a gambling racket, as they play the numbers as the team continues to win the games. After an unbeatable winning streak, the coach, dean, and teacher demand Buck to lose the final game of the season so they can all win big, but when Buck refuses, they have him kidnapped, leaving it up to Kate and the cheerleaders to save the day and retain the integrity of the school.

Perfectly enmeshed in the grindhouse mentality of the ’70s, The Swinging Cheerleaders is best seen on a big screen with an audience, but the next best thing would be to watch and own Arrow Video’s brand new high definition upgrade on Blu-ray. The film looks filmic and crisp, with grainy textures, and the film itself is a sexy hoot. The new 2K restoration is pretty fabulous, and there are new features included on this Blu-ray/DVD combo pack: a new audio commentary by Jack Hill, a new on-camera interview by Hill, and archive interviews, TV spots, trailers, and brand new artwork by Graham Humphreys for the slip case, which is reversible and includes the original theatrical artwork. Here’s a home video release that far outclasses the original DVD release (from Anchor Bay), and Arrow has done it again.