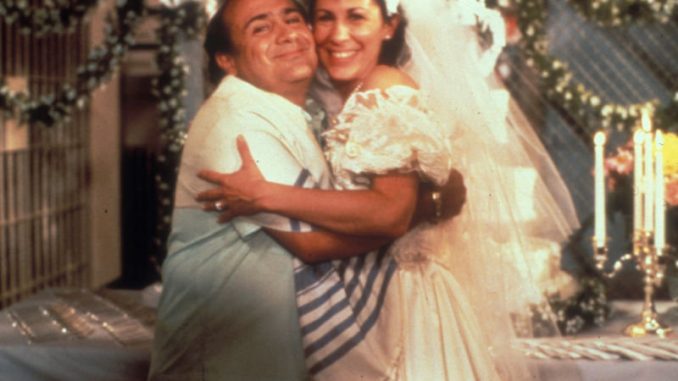 Michael Richards and DeVito are fantastic; the Blu-ray has lots of great special features.

Plot: A New Jersey trucker creates a hit TV show with help from his girlfriend in the ratings business.

Review: Italian American hustler Vic De Salvo (a very energetic Danny DeVito, who also directed) comes to Los Angeles with a dream and a smile: He sees himself as the next movie mogul, intent on pitching a TV series to all the networks in Hollywood, but he literally gets thrown out the door each and every time he tries. By a miracle he ends up in the office of an executive at MBC who has just been canned, but as his last stab at his bosses, the executive green lights Vic’s lame series proposal, ordered to pilot immediately. Vic is over the moon about it, obviously, and he throws a lavish “Vic De Salvo has arrived in Hollywood party” that doesn’t go as planned: He invites every celebrity and executive in town, but the only person who shows up is a nebbish office worker named Francine (played by DeVito’s wife Rhea Perlman) who intercepted her boss’s invitation. Turns out Francine works at Computron, the place where TV’s ratings system is calculated, and after Vic films his terrible pilot episode of his sitcom “Sittin’ Pretty,” he’s told that his episode is going to be dumped on the same night of the World Series.

He needs help ASAP, and his new girlfriend Francine helps him come up with a plan to rig the ratings system so that the right households watch his show during the World Series. The plot to rig the system is preposterous, but it works: Vic calls on his old pals in the trucker’s union to break into the chosen 100 homes to tune in to his show across the USA, but first he has to stage an elaborate ruse to get those 100 families out of their homes for the night … he sends them on a cruise from hell! After the deception works, “Sittin’ Pretty” sweeps the ratings and all of a sudden Vic’s show is ordered to series for 22 episodes! The only way to keep his show going is to keep the cruise from hell sailing so that his associates can keep watching his show from week to week! When finally Vic’s hilariously ill-conceived plan is discovered by the media, Vic has to either face the music or run for his life!

The Ratings Game has been completely off my radar for 30 years, but I’m so glad that Olive Films has resurrected it for its digital debut. It was produced for the premium cable station Showtime in the early 1980’s, and after a perfunctory VHS release it was relegated to obscurity. The movie is quite infectious and hilarious with cameos or small roles by tons of comedians and character actors such as Jerry Seinfeld, Michael Richards (who’s absolutely riotous in this), Kevin McCarthy, George Wendt, Tracey Walter, Vincent Schiavelli, and many more.

The movie has a slow start and goes a little long at 102 minutes, but once it gets going it’s pretty great. After dabbling in short films as a director, DeVito tried his hand here with his first directorial feature, and you can see that he was a natural at it. He’s fantastic in the lead, and he nails the satire home. Big props to Olive Films for releasing a nice Special Edition package for The Ratings Game, complete with a thick insert booklet and special features, including all of DeVito’s short films and deleted scenes. This release is a standout amongst Olive’s releases and should be considered one of the best home video rescues of the year.