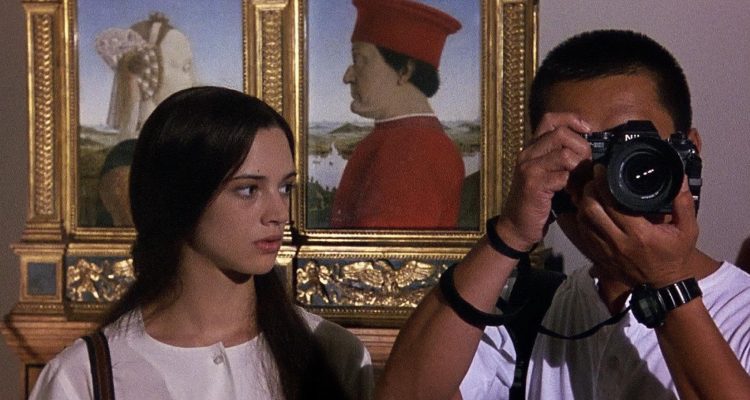 While this is no “masterpiece,” it’s a curiosity, but one that looks pretty impressive on Blu-ray.

Plot: A young policewoman slowly goes insane while tracking down an elusive serial rapist/killer through Italy when she herself becomes a victim of the brutal man’s obsession.

Review: A young policewoman in Rome named Anna Manni (Asia Argento) has a very unusual condition: Something called the Stendhal syndrome, a malady that causes her to become overwhelmingly disoriented and emotional whenever she looks at striking works of art. She forgets who she is sometimes and becomes lost in fantasy when beholding art works, so she should by now know to stay far away from museums, but Rome is a place full of priceless art and museums, so everywhere she goes she’s destined to fall prey to the power of art, which would make her job as a policewoman almost impossible to perform. One afternoon while she’s at a museum and getting the full experience of losing her mind whilst looking at paintings, a mysterious European man (played by Tomas Kretschmann) watches her as she passes out and splits her lip when she falls. He escorts her to a taxi, gives her some cash for the ride home and watches as the taxi drives off. Later that evening, Anna is accosted by the same man, who brutally rapes her and beats her, and then makes her watch as he rapes and murders another woman. Anna, being a policewoman, is able to escape and flee to the authorities.

Treated like the victim she has become, Anna is shell shocked and deeply scarred (and scared) by the horrific experience she’s endured. She drastically changes her appearance to reflect a more defensive position (she cuts her hair, changes her wardrobe, and starts taking self-defense classes at the gym), and she hears about more rape/murders that fit her attacker’s M.O. Just when she’s starting to crawl to recovery, the man kidnaps her again, rapes her and beats her, toying with her and keeping her captive, but she turns the tables one more time, getting some semblance of revenge on him, but at this point the film takes a strange turn where Anna descends into insanity … or is she still sane, and is her attacker still alive and playing sick games with her?

A fairly big concept giallo-type psychological thriller with suffering and madness at its core (not to mention plenty of sadistic violence and graphic depictions of rape), Dario Argento’s The Stendhal Syndrome is definitely one of his more oddball movies. His daughter Asia is really good in the lead role, and as difficult as the part probably was for her to play, she does a great job with what she was given. The script by Argento has some unintentionally hilarious moments in scenes that were never meant to elicit laughter, and the heavy-handed way in which Argento went about with this material bogs the movie down a great deal. The mood is good, but the concept is wacky to say the least. For Argento completists first and foremost, this film will turn many other viewers off with its emotional bulldozing.

Blue Underground just released a 3-disc limited edition Blu-ray set of The Stendhal Syndrome, and for fans of the film it’s the ultimate edition. Blue Underground’s previous 2-disc DVD edition has been surpassed with a really nice looking 2K restoration and newly produced special features, which include a new audio commentary and new on-camera interviews. While this is no “masterpiece,” it’s a curiosity, but one that looks pretty impressive on Blu-ray.