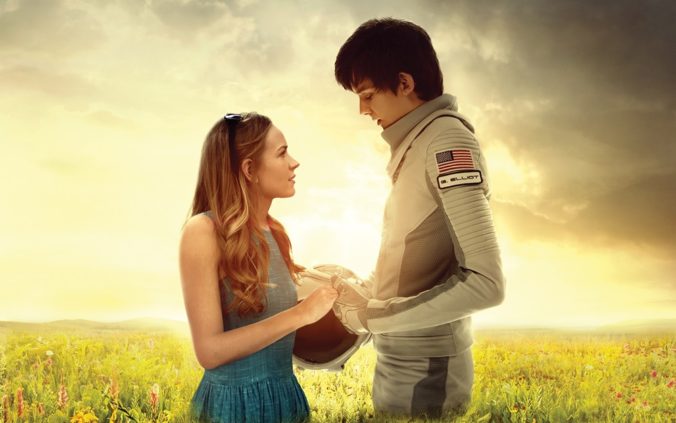 The Space Between Us makes you value the life you have and the world around you with a likeable cast who all give great performances. It’s really a perfect date movie so releasing it at the beginning of February is some nice timing after all.

Plot: Gardner Elliot, the first human born on Mars, begins an online friendship with Tulsa, a teen in Colorado. On his maiden voyage to Earth, the 16-year-old finally gets to experience all the joys and wonders of a world he could only read about. Problems arise when scientists discover that Gardner’s organs can’t withstand the atmosphere. United with Tulsa and on the run, the interplanetary visitor races against time to unravel the mysteries of how he came to be, and where he belongs in the universe.

Review: From the trailers you’d be forgiven for thinking this was a prequel to The Martian as the story of someone living on Mars is a familiar one however, The Space Between Us is a very different film but it would also be a great double bill to watch.

I went in with little expectations as the release date had been moved for this movie several times which made me wonder about its quality but I always thought it looked interesting. It ended up being a really cute movie which was surprisingly romantic and wistful but also makes you appreciate the world around us a little more.

Asa Butterfield is proving to be quite the actor and he gives Gardner Elliot real heart; he can portray several emotions on his face at once making you immediately take to his character and sympathise with his isolation on another world.

He’s not totally alone there though and is essentially raised by scientists, one of which is played by Carla Gugino who effectively becomes his surrogate mother. When Gardner goes to Earth he begins to experience what life is like as a real human and he meets a girl called Tulsa (Britt Robertson) who he has been chatting online with for months.

Tulsa is an emotionally fragile loner who has spent her life going through foster homes and feels that people cannot be trusted and are only out to screw you over.

Butterfield and Robertson have nice chemistry and once she appears the movie turns into an Americana filed road trip movie which incidentally is one of my favourite genres. They travel to the Grand Canyon, Vegas and more as they search for Gardner’s biological father while being pursued by Gary Oldman’s mastermind Nathaniel Shepherd.

As always Oldman just needs to walk on screen to outshine anyone else and it still amazes me that this man hasn’t won an Oscar yet. It’s refreshing to see him play a good (but conflicted) guy rather than a villain which he spent most of the 90’s playing.

It’s beautifully shot and the music is perfectly chosen and by the end of it you’ll want to jump in your car and drive across the US on an adventure.

Just when you think you know how the story is going to go it takes some different turns keeping things unpredictable and interesting.

In terms of flaws there were a couple of clichéd moments like Tulsa’s alcoholic crop duster foster father who is a straight rip off of Randy Quaid from Independence Day. Thankfully he doesn’t have a big role in it though so it isn’t marred by “comic” relief. I’d also say that underneath it all it is really conventional teen romance movie with a twist; if you’re a remotely cynical person then you’ll probably not like it as it’s a movie that very much wears its heart on its sleeve, which is probably why I loved it so much.

Overall, The Space Between Us makes you value the life you have and the world around you with a likeable cast who all give great performances. It’s really a perfect date movie so releasing it at the beginning of February is some nice timing after all.