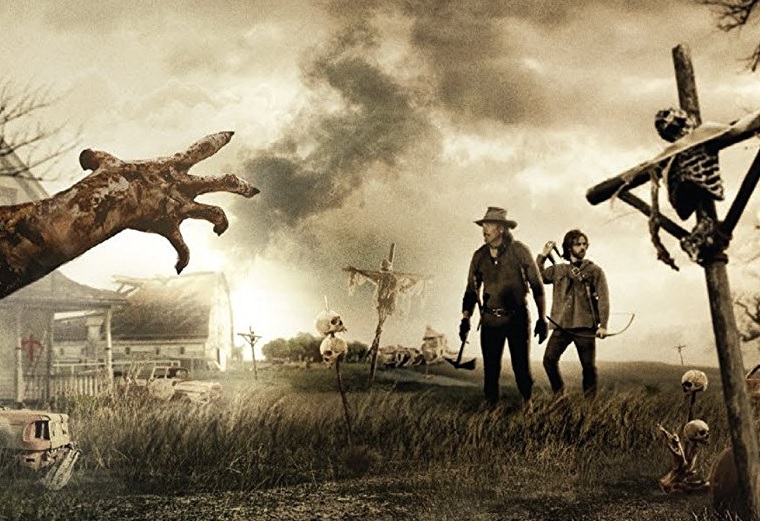 Although not as good as the original, Stake Land II goes for the hardcore action route and still entertains.

Plot: When his home of New Eden is destroyed by a revitalized Brotherhood and its new Vamp leader, Martin finds himself alone in the badlands of America with only the distant memory of his mentor and legendary vampire hunter, Mister, to guide him.

Review: Years after trying to start a fresh life in “New Eden” (Canada), Martin (Connor Paolo) has cultivated a nice little family in the midst of a devastated world still full of nasty vampires and cutthroat cannibals prowling around the decaying urban wastelands. He’s long left behind a life of vamp hunting, but he still thinks about his mentor / father figure Mister (Nick Damici), who abandoned him at the end of the events in the first Stake Land movie.

When a vamp cult, led by a particularly vicious (and smart) vampire, desecrates the outlying areas where Martin lives with his wife and daughter, he is too late to save his family, who are cruelly slaughtered. He goes on a quest to find his old mentor Mister to forsake his sorrows, and along the way he’s waylaid by a cannibal family, and eventually ends up in the clutches of a brotherhood that hold gladiatorial matches for sport. They throw Martin in the pit, and lo and behold his opponent is Mister! After teaming up, they turn the tables on their captors, turn the place upside down and escape (along with a mute girl Mister saves). They resume their hunting spree, join a small enclave of survivors and prepare for a major attack by the same vamp cult that killed Martin’s family.

Though it follows through with reuniting the two key cast members from the original Stake Land, this sequel is more concerned with hard hitting action than the forlorn and profound apocalyptic themes and Americana of the original. The original director Jim Mickle serves only as a producer this time, and the new directors – Dan Berk and Robert Olsen – do what they can from a less focused script by Damici, who doesn’t populate this story with great archetypal characters the way he did the first time around. The movie is well produced and should appeal more to gorehounds than serious post-apocalyptic movie fans, though it’s obvious that Damici was inspired by the likes of The Book of Eli, The Road, and Escape From New York by way of Land of the Dead. What made the first movie so great was that it created its own universe and instantly felt real, while this sequel struggles to retain the magic.

Stake Land II will be available on HD Digital platforms on February 7th and on DVD and Blu-ray from Dark Sky Films on February 14th.