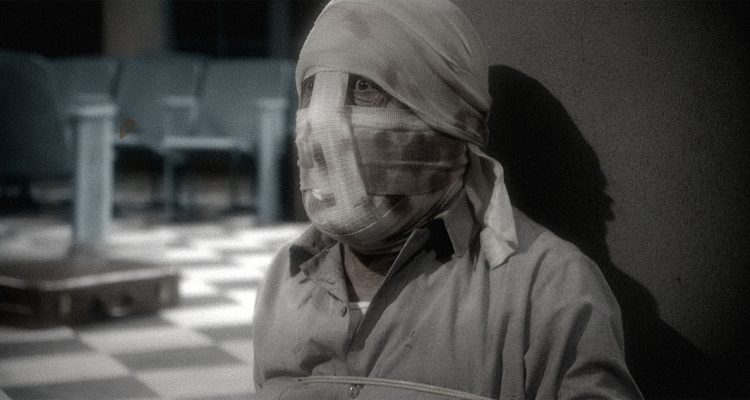 It’s a sepia-toned nightmare, and it’s a success at least in being original, if not especially exciting or attention grabbing. It’s pretty wacky, to say the least, but some viewers will appreciate its cience fiction foundations.

Plot: On the rainy night of October 2, 1968, eight characters waiting on a remote bus station for a bus heading to Mexico City start experiencing a strange phenomenon.

Review: Have you ever had a day so strange and so impossible that it seems like the cosmos are looking down on you as if you’re a rat in a maze? Writer / director Isaac Ezban’s Spanish-language mind bender The Similars settles itself squarely in the middle of a chaotic, unexpected night for eight strangers who are stranded in a bus depot in the midst of a raging storm in 1968. Each character is frantically trying to catch a ride out of town, but even taxis won’t brave the horrific storm outside, and the phone lines are undependable. While the characters bicker and claw at each other in their frustration at their predicament, something totally unexpected and bizarre begins happening: One by one, characters (both male and female) begin transforming into one of the men in the depot, beard and shaggy black hair and all. When they realize that they must be living a nightmare in some kind of supernatural limbo, the characters – who all eventually look identical (even photos on the walls end up looking like the poor sap they’re all becoming) – scramble for some kind of an explanation as to the phenomena that has made them appear similar.

One handicapped boy amongst them might have the answer: He’s reading a comic book that could explain everything away as an alien experiment, or perhaps it could be something even more sinister …

The Similars feels like it was ripped right out of Rod Serling’s The Twilight Zone, and it even has a narrator walking the audience through the whole thing, which should give you an idea as to filmmaker Ezban’s inspiration. The movie itself is a sepia-toned nightmare, and it’s a success at least in being original, if not especially exciting or attention grabbing. It’s pretty wacky, to say the least, but some viewers will appreciate its science fiction foundations.

The Similars is currently available on VOD and on Digital and iTunes from XLrator Media.