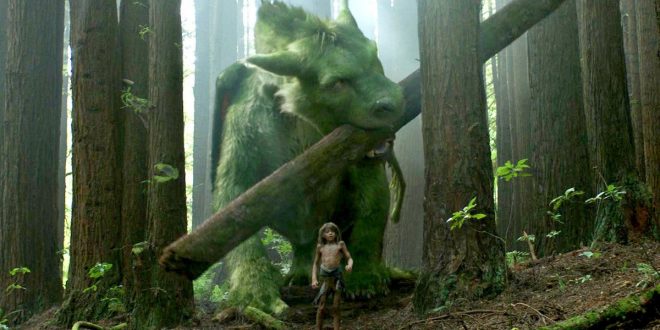 Has a genuine sense of childlike wonder and may well be one of the best remakes of recent times. The Blu-ray has plenty of special features too.

Plot: The adventures of an orphaned boy named Pete and his best friend Elliot, who just so happens to be a dragon.

Review: A little boy named Pete is on a road trip with his parents through the woods when their car crashes, leaving the boy stranded, alone, and orphaned. He’s rescued by a dragon he names Elliot, and he grows up in the wild for the next six years, shielded and protected by Elliot. As time passes, the world moves on and loggers begin to cut the trees of Pete and Elliot’s forest down. Pete (played by Oakes Fegley) is discovered by a forest ranger named Grace (Bryce Dallas Howard), who thinks she’s rescuing him from the wild, but the boy just wants to get back to his dragon. No one believes Pete’s unbelievable story, except a wily old codger (played by Robert Redford), who has been telling a dragon encounter story for decades. Some loggers – led by an intrepid lumberjack named Gavin (Karl Urban) – take it upon themselves to hunt the so-called dragon in the woods, and when they encounter it and snatch it to boot, Pete’s world is turned upside down when everything he’s ever loved and known to be good is taken from him. It’s up to Pete, Grace, and Grace’s daughter Natalie (Oona Laurence) – and the old codger – to save Pete’s Dragon.

Writer / director David Lowery’s remake of Disney’s oft-overlooked Pete’s Dragon is a stunning metaphor of childhood innocence and the treasure contained therein, but what makes it so appealing and fresh is the way it’s told and its seemingly timeless place and setting. No one in the movie really uses technology and the kids in the movie are not just well cast, but are able to conjure up childlike wonder and amazement in the presence of magic. The movie feels real, and what’s more is that it feels like a breath of fresh air in a time when kid coming of age movies have become stale and redundant. Lowry (who did another coming of age movie called St. Nick) treats the material very seriously and with the utmost respect, and the movie emerges one of the best growing up movies of 2016, and perhaps one of the greatest remakes of all time. The dragon looks pretty good too.

Disney’s brand new Blu-ray of Pete’s Dragon (out November 29th) is full of special features to highlight the making of the film, most notably director Lowry’s feature “Notes to Self: A Director’s Diary” that really delve into the fascinating and intimate process of making the movie. Also included are “Making Magic,” “Disappearing Moments” (cut scenes), and an audio commentary by the director, the co-screenwriter, and the two child actors, as well as some music videos and bloopers. Disney has another keeper with this release.