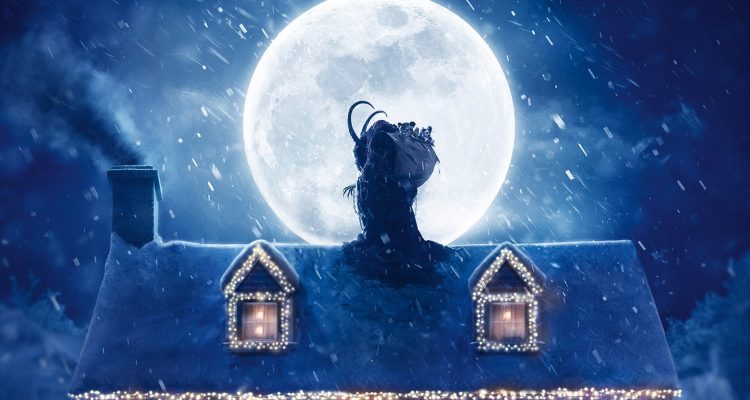 Krampus is one of the silliest movies you’ll ever see but if you can let go of your critical faculties and just enjoy it for the absolute riot that it is then you’ll have a ball.

Plot: When his dysfunctional family clashes over the holidays, young Max (Emjay Anthony) is disillusioned and turns his back on Christmas. Little does he know, this lack of festive spirit has unleashed the wrath of Krampus: a demonic force of ancient evil intent on punishing non-believers.

All hell breaks loose as beloved holiday icons take on a monstrous life of their own, laying siege to the fractured family’s home and forcing them to fight for each other if they hope to survive.

Review: The first time I watched Krampus last year I wasn’t sure what to make of it but one thing was for certain; it was one of the silliest movies I’d ever seen. It still is but I gave it a second viewing over the weekend and despite being daft it’s still hugely entertaining and rapidly becoming a holiday favourite.

This is a movie with killer gingerbread men and giant Jack-in-the-Boxes that eat people so if you’re looking for something with deep meaning then you may want to look elsewhere; despite that though it still manages to create a creepy atmosphere and Krampus himself is wonderfully realized. The mounting sense of dread that builds as we see Krampus on top of rooftops give the impression that this will become quite a dark tale but it never quite goes that far and keeps things (relatively) light until the finale.

The cast are all game and I love the banter between the two families who are related by blood but not much else; they have little in common but try to spend Christmas together because they feel they should rather than genuinely wanting to. I’m sure that is something many families go through at this time of year but if there’s one thing I got from this movie it’s that there is nothing more important than family.

The movie never loses its wacky sense of humour and I especially the enjoyed the Black Friday style of the opening scene with crowds trampling each other in order to get their gifts which reminds me how much I enjoy doing all of my Christmas shopping on Amazon.

The one person who steals this movie is Conchata Ferrell who plays world weary and incredibly sarcastic Aunt Dorothy who has such classic lines as “I haven’t been this hungover since the Pope died”. You can also never go wrong with David Koechner who plays the redneck uncle Howard; as the story goes on though we find out there is more to him than meets the eye and his desire to protect his family is admirable and he becomes a surprising hero.

The ending is genuinely Hellish with some quite stunning and memorable visuals which keeps things firmly footed in the horror genre; at 98 minutes it’s also very well paced and never less than fun.

Director Michael Dougherty also made the modern classic Trick r’ Treat which is now essential viewing for Halloween and I think once people give Krampus a shot and enjoy it for what it is then they’ll have a great time.

Overall, Krampus is one of the silliest movies you’ll ever see but if you can let go of your critical faculties and just enjoy it for the absolute riot that it is then you’ll have a ball.