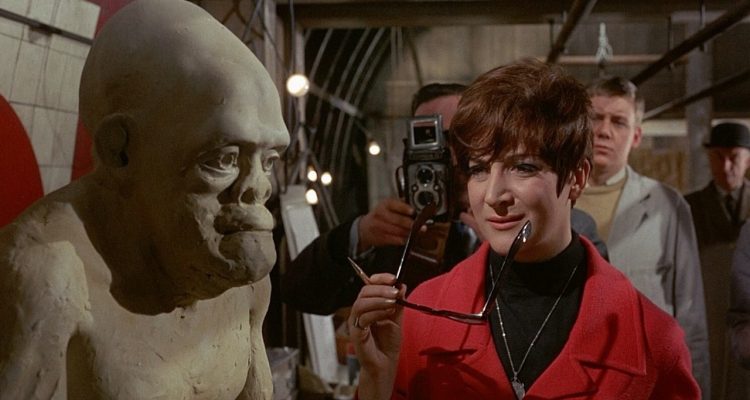 A truly legendary trilogy that provides something different with every entry.

Today, I would argue that the undisputed champion of modern horror, or should I say, “horror” (because they don’t make ‘em like they used to), is Blumhouse Pictures. Basically, the higher-quality horror films these days seem to come with the Blumhouse banner. Before Blumhouse and Dimension and all the other more modern horror churning houses, though, there was Hammer. Updating beloved Universal horror classics like Dracula, Frankenstein and The Mummy, Hammer produced terrific films and made household names of veteran actors such as Peter Cushing and Christopher Lee. But what got Hammer into horror? The answer, my friends, is a little picture from 1955 called the Quatermass Xperiment. Let’s take a closer look… 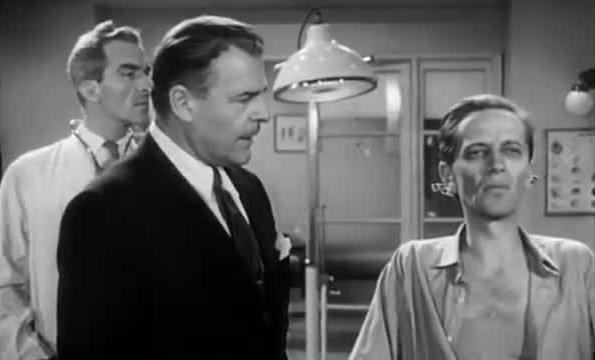 Plot: Three astronauts return from space, with one carrying a deadly alien organism that threatens to consume the human race.

Review: The first of the Quatermass trilogy, The Quatermass Xperiment, is a marvellous classic tale of the fear of the unknown. Shot in black and white (and I think that most movies of this ilk need to be shot in this manner), there’s an eeriness throughout the film, as you’re not quite sure what the astronaut is turning into. The film smartly ensures that he seldom speaks, and the change is mainly hidden from the audience, forcing their imaginations and the horrified people that the monster encounters to give you an idea of its grotesqueness. It’s an efficient way of ensuring that the audience won’t laugh at whatever rubber concoction they come up with and building horror as the astronaut slowly transforms into something less than human.

When the monster appears at the end of the film, the only word I can use to describe it is, gross. This is 1955, so it doesn’t have the ichor and sliminess that we would expect from more modern films, but it’s hard to conceive that the creature and the end of the movie was supposedly once a human being. The very design of the monster defies description – you’ll just have to see for yourself.

The cast is competent, with Brian Donlevy standing out as Prof. Bernard Quatermass, the eponymous character responsible for the experiment in question. There’s a sinister quality to Donlevy’s Quatermass, as you begin to suspect he really doesn’t care that one of the astronauts in his charge is changing into something else, only to contain the damage before it gets out. His determined and cold assurance that they will send another rocket into space at the end of the film makes his character both detestable and interesting. Of the other characters, Jack Warner is a treat as a veteran cop who is out of his element, and Thora Hird gives a hilarious bit as a drunken and barely incoherent vagrant trying to alert the police to the monster.

As for pacing, the movie is a bit of a slow-burn, but these sort of movies are, and if you’re the type who wants explosive gore in your horror, you’ll be out of luck. The Quatermass Xperiment is a moody movie that gradually builds its horror as you see the astronaut turn progressively into something hideous. If you’re not a fan of those types of movies, you better be warned. For what it is trying to do, though, The Quatermass Xperiment is a terrific film that builds its horror methodically until the explosive (literally) ending. 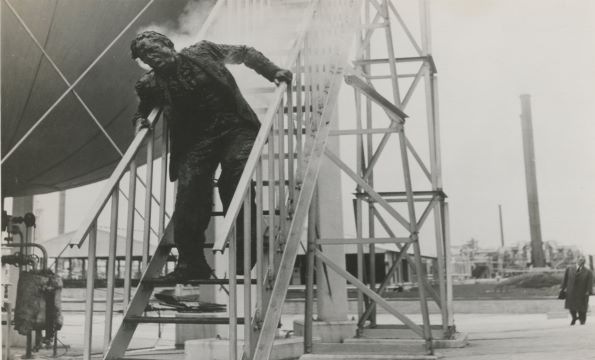 Plot: Prof. Quatermass’ investigation into meteorites landing in a field leads to the uncovering of a sinister alien plot.

Review: Whereas the first film concerned the transformation of a human being into a thing from another world, Quatermass 2 is a more traditional 50s paranoia horror film, which became popular with the discovery and use of atomic bombs during WWII. While not quite as clever or stylish as the first film, what Quatermass 2 does, without a doubt, keeps the viewer guessing about who’s in on the conspiracy and who isn’t.

Brian Donlevy returns as Bernard Quatermass, and unlike the first film, where he’s a pseudo-villain, he’s a lot easier to like in this movie as he’s the obvious hero. I read that Donlevy was often intoxicated and hated his lines in this film, but his commanding presence as Quatermass would be sorely missed if he was absent. John Longden replaced Jack Warner as Inspector Lomax, and while his portrayal is far more serious, I enjoyed Warner’s take on what was going on – his bewildered performance matched the audience’s. The rest of the cast is serviceable, but don’t mistake yourself; Donlevy is the central focus and carries the movie.

I will say that the effects aren’t quite as impressive as The Quatermass Xperiment, but then again, this is a whole different type of movie. Instead of trying to hide from you what one of the characters is becoming, this is all about hiding who has been infected and thus is part of the alien plot. It’s a good old-fashioned conspiracy theory and carries many of the trappings that you would expect – the government official who is part of it, the man in government who could expose the truth, but is taken out, the friend who becomes an enemy – it’s all there. While the ending dovetails into true fantasy and the monsters at the end are otherworldly, this is truly a human tale of mistrust, deceit and desperation. It’s a different type of movie than the first, but that’s more enjoyable than a sequel that just regurgitates the original. 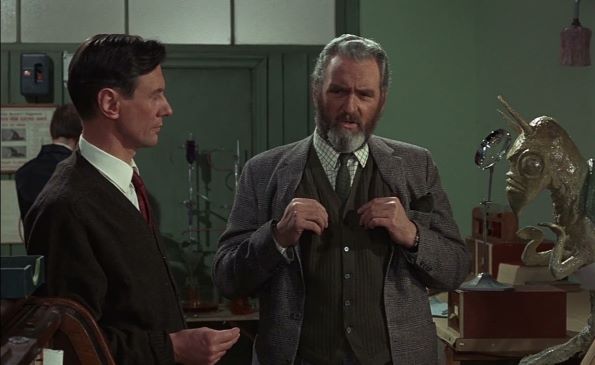 Plot: The discovery of an alien ship in the London Underground leads to some alarming findings about human evolution and Martian influence.

Review: While the first two films were very straightforward narratives regarding the horrors that the main characters had to contend with, Quatermass and the Pit takes a different approach and tries to approach the story in a more intellectual and existential manner. While I could see that the film would be polarizing and especially jarring to those who watched and enjoyed the trilogy’s first two films, the fact that this movie goes so far outside the other two should be applauded. For my money, this is the best of the three films.

Brian Donlevy is not part of this film, and the Quatermass part is played by Andrew Keir. While he’s likeable and plays Quatermass as more of an intellectual, he misses the commanding attitude that Brian Donlevy brought to the part. Barbara Shelley is engaging as the female lead, and Julian Glover does a yeoman’s job, playing the military man who is a natural foil for Keir’s cerebral doctor. The focus of this movie is not the characters, though, and its charm lies in the uncovering of the aliens and what their purpose was on Earth. It’s almost impossible to tell you what the story is about – the closest comparable is Stephen King’s Tommyknockers. In all honesty, this movie is probably what Battlefield Earth should have been (instead of the steaming garbage that was served up to us).

The film is shot in colour, and while I prefer the black-and-white look of the first two, the colours are vivid, and the ending in this film would not have been the same to me if it was black-and-white. The makeup effects are outstanding, and while this movie is not as in-your-face with the horror as the other two, there’s general disquiet and dread as the story unfolds, and you just know that things are going to go sideways for the main characters. The ending is spectacular and probably the best of the three.

I should mention too, the score for all three films, while not particularly memorable, are suitable for what you’re seeing on the screen. I would label them “horror movie scores,” with lots of quiet, intense notes that crescendo when something truly monstrous or startling happens on screen. While it’s always great to have a memorable tune that you can instantly recognize in a film, not all film music has to impress and sometimes doing your job is adequate enough.

What is truly special about the Quatermass Trilogy is each film’s distinctness. While the  Quartermass character remains a focus throughout the films, I have to commend that these movies truly tried something different each time out and didn’t try to play it safe. The result is three different viewing experiences, which all feel that they came from the same world but still provide new thoughts and emotions when watched. I highly recommend this trilogy to horror fans and buffs who want to know how a legendary horror studio got its beginnings.